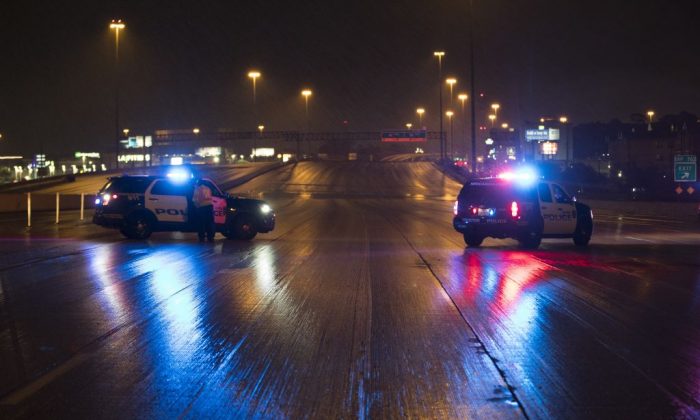 Wife of Drowned Houston Police Sergeant Warned Him Not to Go, His Final Words Were Heroic

As rain pummeled Houston in the dark at 4 a.m. early on Sunday, Aug. 27, Police Sgt. Steve Perez left home in his patrol car.

He tried to find a way to his assignment downtown, but flooded streets blocked all of his options. By protocol, he headed to the closest police station in Kingwood instead.

“Here’s a man that didn’t spend 20 minutes and then came back to say ‘Hey I tried.’ He spent close to two and a half hours, because it was in his DNA,” said Houston Police Chief Art Acevedo.

Perez didn’t make it to Kingwood. He drove into an underpass in the dark that was flooded with over 16 feet of water and drowned.

When Perez missed the roll call, police called his wife who said she hasn’t seen him since 4 a.m. A search commenced, eventually narrowing to an underpass Hardy Tollway and Beltway 8 at 10 p.m. on Monday night, according to Acevedo, who described the events with tears in his eyes.

“Once we got there it was too treacherous,” Acevedo said. “We could not put more officers at risk for what we knew in our hearts would be a recovery mission.”

Police officers were stationed at the underpass overnight, waiting quitely until the dive teams and a member of Lousiana’s “Cajun Navy” arrived in the morning.

Perez’s body was recovered within 20 minutes.

Acevedo described Perez as “one of the sweetest people in the department” and a “gentle, public servant.” Perez was a 34-year veteran on the police force and died days shy of his 61st birthday. He is survived by an adult son and daughter and his wife, according to Chron.com.

Acevedo had to break the news to Perez’s wife.

“I told his wife, ‘If the Lord’s going to take him today how do you think he would want to go—laying in bed, watching a disaster, or doing what he’s done for 34 years?'” the chief said according to Daily News.

“The smile that overcame that woman’s face, that beautiful wife, said it all. ‘If it’s his turn to go,’ she said, ‘this is the way he would want to go.'”

As Perez was leaving for his assignment before 4 a.m., his wife warned him not to go. His father-in-law, a Korean War combat veteran, also cautioned him to stay home.

“We’ve got work to do,” was all Perez said before heading out into the rainy night.

Perez is the 15th fatality related to Hurricane Harvey, which made landfall on Friday evening and was later downgraded to a tropical storm.

According to the Harris County Sheriff’s Office, police officers have been involved in more than 3,000 rescues since the storm began.