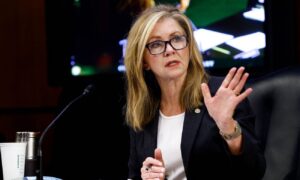 The wife of a New York man who died in police custody is claiming that police didn’t act quickly enough to save him after he complained of dizziness.

Andrew Kearse, 36, of the Bronx, was visiting a friend in May when police pulled him over for driving erratically. According to police, the father of nine, who was paroled 15 days earlier, then ran away from the officers, reported the New York Daily News, who said he had previously served time for selling drugs and grand larceny.

Police chased him and then took him into custody. AP reported that he failed to report to his parole officer and an “absconder” warrant was released for his arrest, correction records show.

But on the way to the station, he lost consciousness after complaining of dizziness. He was later pronounced dead at a nearby hospital.

“Officers themselves were judge, jury and executioner for my husband,” she told The Associated Press this week, saying she learned of his death in news reports. “They did not give him the medical attention he asked for.”

A local person who lives nearby said that when police chased him down, he heard someone scream in pain. “The fella screamed that they broke his leg and they were hurting him,” Terry Cuzdey said, AP reported.

The cause of death hasn’t been released by the Schenectady county medical examiner.

As chief of the Schenectady Police Department I recognize that incidents of this nature create questions in the community that people want and deserve to have answered, and that the failure to immediately answer them may give rise to public concern.

It is my intention to oversee an objective, independent review of all actions taken by the police during this arrest, but stress that it is important that incidents be thoroughly and independently investigated before all of these questions and concerns can be answered and ultimate findings can be made.

I ask for the public’s patience with the release of facts, as none will be made available until the New York State Police conclude their investigation.”