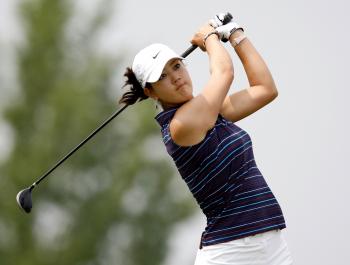 Michelle Wie watches her tee shot on the ninth hole during the third round of the State Farm Classic at Panther Creek Country Club on July 19, 2008 in Springfield, Illinois. (Gregory Shamus/Getty Images)
Golf

Michelle Wie, 18,  answered questions at a PGA news conference Friday about her decision to play in another men’s PGA golf tournament at the Legends Reno-Tahoe Open July 31-Aug.3.  She accepted a sponsor’s exemption where she will join her former Stanford classmate, Rob Grube, who was also granted an exemption for the event at the Montrêux Golf & Country Club in Reno, NV.

Wie, a teenage golf phenom, captured the golfing world’s attention with her youthful prowess, tall lanky frame, and confident good looks. However, she has yet to win an LPGA event and it is the 8th time she will tee it up in a PGA event.

Now, after recovering from a long-lasting wrist injury, she hopes to make the cut for the first time on the PGA tour. The only money she has won playing against the men was on the Korean Tour, where she made the cut at the SK Telcom Open, in 2006.  But she has high hopes for this week’s tournament.

The last woman to make the cut in a PGA TOUR event was Babe Zaharias in 1945 at the Tucson Open.

Wie was asked what gave her the impression that she could qualify again.  She responded, “Well, I felt like I'm just starting to feel really confident with my game, and the game is getting better and better and my ball striking is improving, my short game, my putting, everything. But I just feel like I'm getting a lot of confidence, but I think I'm really taking this weekend as a really good learning experience for me, and I am glad to be here and to have this opportunity to compete with the highest level of players, and hopefully I can play really well and show what I've got this week.”

“I am just really excited to be here. I am excited to play this tournament and really honored to have this opportunity again. Hopefully I play really well this week," said Wie.

“I know Michelle is a great competitor and we are thrilled to have her accept our invitation to showcase her skills at our tournament. This will be a phenomenal experience for a global television audience and even more spectacular for those in the gallery to see a player like Michelle tee it up at Montrêux,” said Tournament Director Michael Stearns a few days earlier.

Wie’s accomplishments include: nine top-10 finishes in LPGA major championships; youngest winner of an adult USGA tournament (the 2003 Women’s U.S. Amateur Public Links at 13); youngest player in a PGA TOUR event (the 2004 Sony Open at 14); lowest round by a female in a PGA TOUR event (68 in the 2004 and 2006 Sony Opens); youngest player to make a cut in an LPGA major (the 2003 Kraft Nabisco Championship at 13); and the first female to make a cut on the Asian Tour (the 2006 SK Telecom Open).

The Legends at Sparks Marina Reno-Tahoe Open celebrates its 10th anniversary  as an official PGA TOUR event and is also part of the FedExCup series, where the winner receives not only the $540,000 winner’s check but also 12,500 FedExCup points.