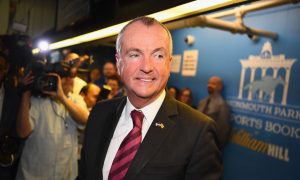 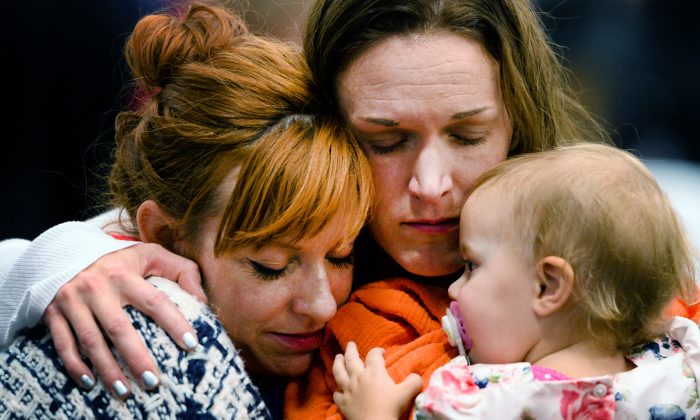 FILE - In this Dec. 19, 2015, file photo, Renee Wetzel, widow of Michael Wetzel, center, and her daughter Allie, are comforted by a woman during the memorial service for her husband at Calvary Chapel Conference Center in Twin Peaks, Calif. Wetzel the widow of Michael Wetzel, killed in last month's mass shooting in San Bernardino has filed four claims with the county and is seeking damages totaling $58 million, according to a newspaper report. (Rachel Luna/The Sun via AP, Pool, File)
US

SAN BERNARDINO, Calif.—The widow of a man killed in last month’s terror attack in San Bernardinohas filed four claims against the county and is seeking damages totaling $58 million, according to a newspaper report.

The claims were filed in late December on behalf of Renee Wetzel, whose 37-year-old husband Michael Wetzel was one of 14 people killed in the attack at the Inland Regional Center, The Sun of San Bernardino reported Tuesday.

No other claims stemming from the shootings have been filed against San Bernardino County, spokeswoman Felisa Cardona told The Associated Press on Wednesday.

All “He was my best friend and an incredible father who was loved by all,” Renee Wetzel said in a statement to PEOP… pic.twitter.com/tEn3cRfspX

Michael Wetzel, of Lake Arrowhead, worked as a supervising environmental health specialist for the county. He was killed while attending a holiday luncheon and training session for the county health department.

The claims, which list the county and 25 unidentified individuals as respondents, allege Wetzel’s death was preventable and caused by negligent, careless actions of the respondents.

Andrew J. Nissen, one of two attorneys representing Renee Wetzel and her children, told The Sun that county officials had yet to respond to the claims. He declined to elaborate about the negligence claims.

County spokesman David Wert said in a statement that the county will carefully consider each claim and act in the best interests of everyone involved.