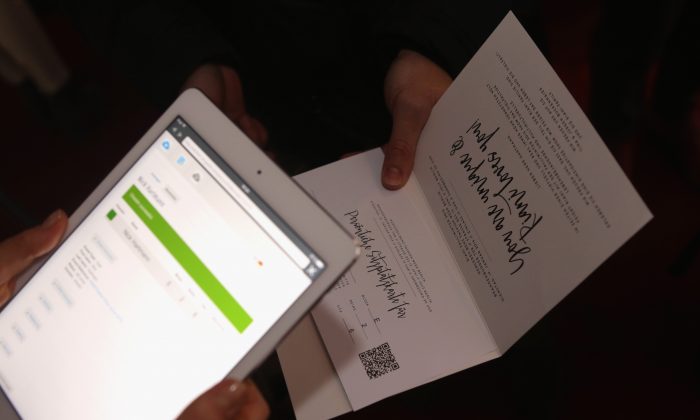 A visitor holds an invite during the Mercedes-Benz Fashion Week Berlin Autumn/Winter 2016 at Brandenburg Gate on January 19, 2016 in Berlin, Germany. (Adam Berry/Getty Images for IMG)
Tech

The government has an easy process for making sure widows and widowers can get access to the insurance policies, pensions, and other benefits of deceased spouses, but passwords to electronic devices? You’ll have to get in line at the courthouse.

Peggy Bush, 72, lost her husband to cancer August, according to CBC News. She didn’t know the Apple ID password to her husband’s iPad, and therefore couldn’t purchase apps on that device.

“I just had the iPad. I didn’t touch his computer, it was too confusing to me … I didn’t realize he had a specific password I should have known about…it just never crossed my mind,” Bush told CBC News.

Apple was unable to give Bush the account password, but told her that they would give her a new Apple ID and password. However, Bush refused, because then she would have to repurchase all of the existing apps her husband had brought from the Apple Store.

Initially, Apple had asked for a death certificate.  Bush’s daughter, Donna, gave it to them, but that didn’t work. After two months of dealing with customer service, including giving them the serial number for the iPad and a copy of her husband’s will, customer service told Donna she needed to get a court order, which could cost hundreds of dollars.

“I then wrote a letter to Tim Cook, the head of Apple, saying this is ridiculous. All I want to do is download a card game for my mother on the iPad. I don’t want to have to go to court to do that, and I finally got a call from customer relations who confirmed, yes, that is their policy,” Donna said.

Bush’s family eventually contacted CBC News, who then contacted Apple in turn. Apple apologized to Bush for the “misunderstanding,” and is currently working with her to get the password.