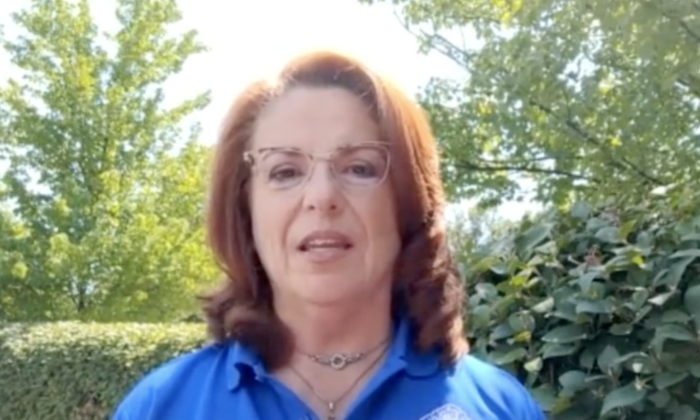 Ann Dorn, Capt. David Dorn's widow and a retired officer herself, is interviewed by NTD The Nation Speaks on Aug. 15, 2022. (NTD)
Social Issues

Masooma Haq
Masooma Haq began reporting for The Epoch Times from Pakistan in 2008. She currently covers a variety of topics including U.S. government, culture, and entertainment.
View profile
Follow
and Cindy Drukier

When George Floyd was killed by police in the summer of 2020, his wasn’t the only black life that was lost. As rioting erupted across the country, mostly in black communities under the banner of Black Lives Matter (BLM), another black life violently taken was that of a dedicated public servant of 38 years—Capt. David Dorn.

Ann Dorn, widow of the slain retired St. Louis police officer, is working to hold corporate backers of BLM accountable for supporting anti-police rhetoric and for their lack of financial transparency and responsibility to the communities BLM claim to speak for.

“I’ve partnered with concerned communities of America, and Pastor Marc Little and his group to go after these corporations who are just blindly throwing money at [BLM], whether it be because they were bullied, or because they actually believe in what is being preached,” Dorn, whose husband was shot in the chest by a looter, said in an interview with NTD’s “The Nation Speaks” program.

Many Questions About BLM Money

According to BLM’s own records, they raised close to $90 million—mainly from corporate giving. Critics say there has been very little accounting for how the money is being used and why black communities have not seen much of the direct financial support promised by BLM.

Indeed, it was reported that one of the co-founders of BLM, Patrisse Cullors, purchased a mansion worth over $5 million.

BLM co-founder Patrisse Cullors has spoken out against the report that revealed her organization’s purchase of a $5.8 million mansion in southern California, calling the story a “racist and sexist” attack on the movement.

According to the April 4 report by New York Magazine, the 6,500-square-foot California estate was bought in October 2020 using money that had been donated to Black Lives Matter Global Network Foundation, which acts as a fundraising umbrella for BLM activism. It’s unclear who leads the foundation since Cullors stepped down from her position in May 2021 amid criticism over its lack of financial transparency.

Dorn criticized BLM for neglecting the families and communities the organization said they wanted to help.

“They’re not putting that money back where they promised it would go. And the communities are suffering and they’re still suffering to this day,” said Dorn.

The national arm of Black Lives Matter (BLM) shut down all of its online fundraising streams in February, shortly after California’s Department of Justice threatened to hold the organization to account over its “lack of financial transparency,” which includes at least $60 million in undisclosed donations.

California and Washington state had prohibited BLM in January from collecting donations due to transparency issues, but it did not comply with those orders, the Washington Examiner reported.

Meanwhile, in her effort to hold BLM corporate donors accountable Dorn said that, thus far, there has not been any significant response from CEOs.

“We’re addressing the CEOs and the Board of Directors directly,” said Dorn, including notices and urging them to sign a pledge which the public can also sign if they go to www.concernedcommunities.org,” said Dorn.

Part of the pledge (pdf) reads: “Going forward, I pledge that on behalf of myself and the men and women who make up [name of corporation], we will strive to vocally and financially support our women and men “in blue” as well as the millions of first-responders and military personnel, and their families, that protect us every day from harm.”

The goal of the pledge is to exert public pressure on corporations, so Dorn encourages readers to go to the website and sign the petition to hold them accountable for the danger BLM’s calls to defund police have brought to communities that now lack police protection.

According to the BLM website, they say they have reinvested “$25 million into the Black community.” They also write that their other focus is to put money into lobbying for legislation that ends police qualified immunity, and pushing for transforming policing, or defunding police departments through the BREATHE Act (pdf) and the People’s Response Act.

Yet Dorn remains extremely concerned about the “defund the police” movement, pushed by BLM, resulting in physical attacks on police and mayors spending less on their police departments all across the country.

“Large metropolitan areas are suffering for a lack of police officers. They’re not hiring; they won’t pay them,” said Dorn.

She said that in her own city the police force has been radically cut to an unsustainable level, where 911 calls often do not get a response from a police officer, or—if they do—it takes too long.

“Our mayor herself has cut at least 100 jobs. We’re 30 to 40 percent short on manpower just as far as police officers; that doesn’t include our dispatchers and our civilian personnel. Our EMS trucks are at least 50 percent short. So, the entirety of first communities as a whole is suffering across the country,” Dorn said.

In practical terms, Dorn estimates that instead of 120 officers on the street on a given night, there will be only 20 in the new defunded scenario. The officers that are there are required to work overtime and face burnout. In addition, social workers who are supposed to help answer domestic calls, often do not want to go without a police escort, because of concerns about their own safety.

In addition, St. Louis Mayor Tishaura Jones has implemented a new division of civilian oversight to investigate police misconduct, which Dorn says will cause more officers to leave policing for lack of due process.

“Now, you’re going put this in the hands of civilians who have absolutely no training,” said Dorn. “And they’re not even affording officers the same respect (legal due process) of giving them those same rights. That takes it all away from them. It puts all the power in the civilian review board.”

Jones’s office did not immediately respond to a request for comment.

Dorn is certain these policies will only further demoralize police officers, who are being forced to quit, and it will be communities that suffer from the lack of law enforcement personnel.

After losing her first-responder husband who dedicated his life to public service, Dorn started a podcast called Hidden Heroes to interview families of first responders.

“I want to humanize the badges,” said Dorn. “They’re in your community; they go to church with you. They’re normal people. And I want people to get to know them through their families, and what it’s like to live with a first responder.”

In addition to the podcast, Dorn has raised over $100,000 with the Capt. David Dorn Foundation, from which she supplies equipment to first responders to lessen their financial burdens and enable them to do their jobs more effectively.

“We’ve bought over $150,000 worth of equipment, and given it to various first responders, and I think 15 different agencies, or 121 police and firemen and 100 EMS workers, and we’re expanding.”

The foundation relies on donations to be able to continue giving back to communities around the nation in her husband’s memory, Dorn said.

The Epoch Times reached out to Black Lives Matter for comment.