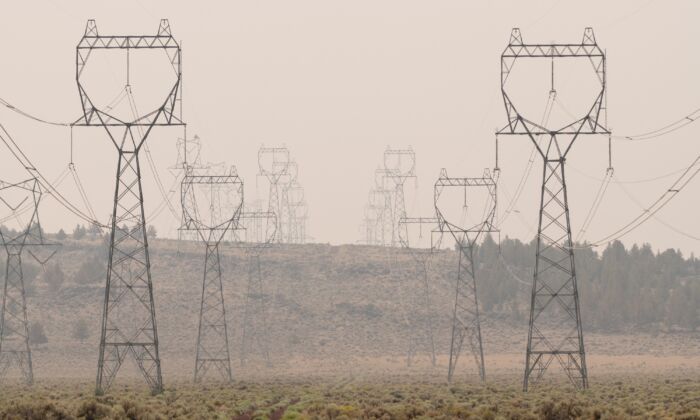 Electricity pylons crackle in the mid day heat amid thick smoke from the Bootleg Fire in Christmas Valley, Ore., on July 21, 2021. (Mathieu Lewis-Rolland/Getty Images)
US

Widespread power shut-offs could leave more than 50,000 Oregonians in the dark this weekend as the state faces extreme wildfire risk.

With 26 fires already burning on 195,000 acres across the state, the National Weather Service in Portland issued two red flag warnings on Sept. 8 for critical fire weather conditions, including strong wind, high temperatures, and low relative humidity for this weekend.

Winds are forecast to gust up to 50 mph in the Willamette Valley as temperatures reach into the mid-90s.

“We’re at what I would call the APEX of fire season. Any new starts could be very problematic,” Oregon’s deputy fire marshal Travis Medema said during a Sept. 8 news conference.

The conditions are eerily similar to those that led up to the 2020 Labor Day fires when six “megafires” ignited across the state, burning more than 1 million acres, destroying more than 4,000 homes, and causing 11 deaths.

Though this weekend’s winds are not expected to reach the intensity of those in 2020, forecasters still say rapid fire spread is possible.

Utilities are being proactive.

Oregon’s largest utility, Portland General Electric said it was “increasingly likely to call a public safety power shut-off” in 10 areas affecting about 30,000 homes on the outskirts of the Portland metro area.

“Projected winds make it entirely possible that there will be significant damage to our system.

“Our field crews and support workers as well as additional resources from partner utilities will be deployed during the event and will work until power is fully restored,” Portland General Electric CEO Maria Pope said during the news conference.

Pacific Power has notified about 12,000 customers in five counties south and west of Portland of a potential public safety power shut-off this weekend.

Lane Electric Cooperative, which serves rural areas outside Eugene, made the decision to implement a public safety power shut-off on Sept. 9 at 5 p.m.

“This decision was made after carefully considering current wildfire risk, predicted weather forecasts, consulting emergency officials, and through conversations with local utilities,” the utility wrote on its website. It advised customers to plan accordingly for an “extended outage.”

“Please note that this may include a preventative public safety power shut-off and we can’t guarantee advanced warning,” it wrote in a notice to customers. “For this reason, please prepare to be without power for an extended period this weekend.”