Widespread Power Outage in North Carolina Due to ‘Intentional’ Gunfire 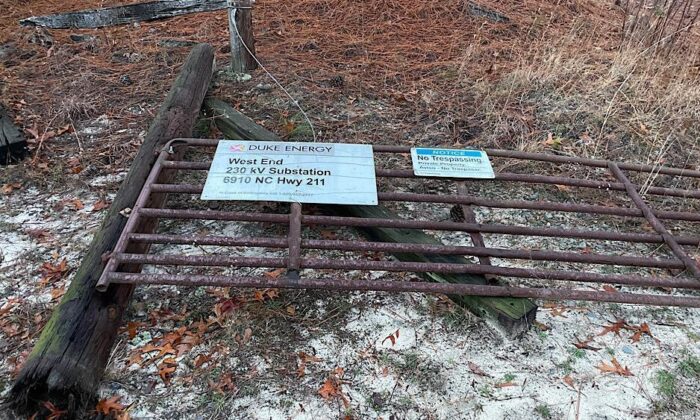 The gate to the Duke Energy West End substation in Moore County, N.C. on Dec. 4, 2022. (John Nagy/The Pilot via AP)
By Jack Phillips

Officials in North Carolina said on Dec. 3 that a power outage affecting tens of thousands of people was due to damage from gunfire and is being investigated as a “criminal occurrence.”

Nearly 40,000 customers were without power in Moore County as of Dec. 4, according to an outage map provided by utility Duke Energy. Moore County is located north of the city of Fayetteville.

Authorities also told residents to stay off the roads, noting that some traffic lights aren’t working.

In a statement on Dec. 4 about the outages, Gov. Roy Cooper said that an investigation is underway.

“An attack like this on critical infrastructure is a serious, intentional crime and I expect state and federal authorities to thoroughly investigate and bring those responsible to justice,” he wrote on Twitter.

In a social media post, the Moore County Sheriff’s Office said that power outages were reported after 7 p.m. local time on Dec. 3 in the county. The initial reports said that instances of “vandalism” were discovered, although they weren’t described.

“As utility companies began responding to the different substations, evidence was discovered that indicated that intentional vandalism had occurred at multiple sites,” the sheriff’s office said. “Moore County Sheriff’s Deputies and various other law enforcement agencies within the county responded to the different areas and are providing further site security.”

In a later update, Moore County Sheriff Ronnie Fields said that “evidence at the scene indicated that a firearm had been used to disable the equipment.”

It appears that no suspects have been arrested or identified in connection with the incident. No motive has been publicly revealed.

The FBI, the state bureau of investigations, and local teams are assisting with the investigation. A state of emergency and curfew was declared from 9 p.m until 5 a.m. Dec. 5, with traffic lights out and other issues across the county.

Over 100,000 citizens have been impacted by the blackout, with authorities saying that the top priority now is to restore essential services. An emergency shelter is open for those in need.

“It’s December and it’s getting cold, and being without power can be very challenging at times,” he said. “We’re pursuing multiple paths for restoration in efforts to bring service back on as quickly as possible; however, due to the nature of the damage incurred many customers should prepare for an outage that could extend to as late as Thursday, Dec. 8.”

He confirmed that two substations were taken offline by “intentional impact” that damaged multiple pieces of equipment, causing power to go out.

“Perhaps in a storm where you can go in and reroute power. That was not an option in this case so repair has to be completed, in many cases, some of the equipment will have to be replaced.”

He said that Duke Energy is continuing to work around the clock with state and local law enforcement officials to restore power.

UPDATE: This article has been updated with newer details.