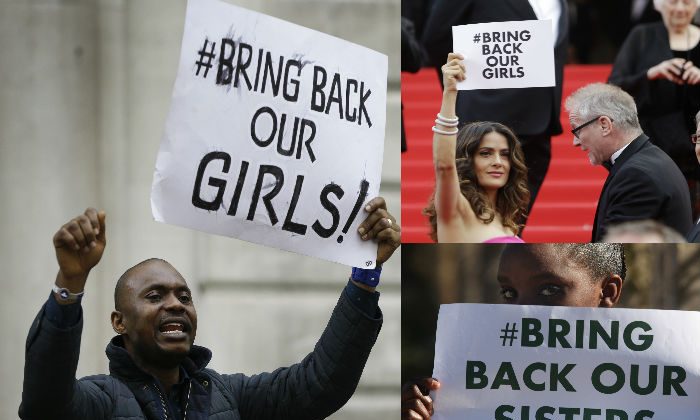 Right: A demonstrator holds a banner, during a protest in London, UK, about the kidnapping of girls in Nigeria. (AP Photo/Kirsty Wigglesworth) Top left: Actress Salma Hayek holds a similar sign. (AP Photo/Thibault Camus) Bottom left: A girl from a Soweto, South Africa calls for the release of the Nigerian schoolgirls. (AP Photo/Denis Farrell)
Opinion

Hashtag activism will not save the more than 200 Nigerian schoolgirls abducted by terrorist group Boko Haram. But the #bringbackourgirls hashtag is not meaningless, as some of its critics contend. Hashtag activism is a gateway between politics and popular culture, a platform to educate the ignorant and draw attention to the operation of power in the world. And when it shines a spotlight on a burning crisis in Africa that has been raging for years, that matters.

“Bring back our girls” began in late April as a Nigerian rallying cry intended to spur immediate action from the inept government. The mantra found its way to Twitter as #bringbackourgirls, and went viral after news broke that Boko Haram planned to sell the girls into marriages for $12 each, according to Time. For two weeks, the story – and the hashtag – have dominated traditional Western media and social media.  As First Lady Michelle Obama delivered the President’s weekly address last week, she held a handwritten sign emblazoned with the hashtag. Celebrity entertainers have taken the message to their fans, reaching millions.

The heart of the struggle is in Nigeria. And the people suffering this horrible tragedy should and must remain the center of this story. So the question is whether this global outpouring of sympathy (largely manifested on social media) can help to deliver the missing young women to safety.

Of course, millions of Americans tweeting about a country that most of them cannot find on a map is hardly a weighty gesture. And even if the resulting media pressure contributes to a more effective military response to this act of terrorism, no social media campaign will change the deep-seated political, economic, and social conflicts at the root of this horror.  But #bringbackourgirls does serve a purpose.

Hashtag activism’s most important function is to divert public attention to new subjects, and in ways that stir conviction. It contributes to a process of “agenda setting” that drives the news media. The media you consume may not dictate your views, but it does focus your attention by elevating stories and topics.  It tells you what to think about and what is important. Pre-Internet, elites and major media outlets performed this function. Today, hashtag activism is a form of agenda setting in which regular people may participate and lead – and sometimes excel.

True, hashtag activism is not magic pixie dust that can rescue these young women, democratize governments, or decisively alter complex social events all by itself.  But that is a false standard to use in measuring its value. The social media mobilization around #bringbackourgirls has reset the agenda of Western media. Attention is on Africa. And in the sentiments, articles, and discussion flowering around the hashtag is a picture of the social and cultural conflicts in Nigeria:  the wide inequalities of the region, the brutal form of terrorism practiced by Boko Haram, corrupt and incompetent government, and the agonizing plight of women caught in these struggles. The measure of this campaign’s importance will be whether these lessons stick and we continue to pay attention to Nigeria in the future.  The #Kony2012 campaign did not result in the capture of Joseph Kony. But it did inform millions of people about violence in Central Africa.

Still not convinced this social media stuff is significant? Consider measuring the power of digital agenda setting by the force of the response against it. Take, for example, the role of social media in Turkey’s anti-corruption movement. Prime Minister Recep Erdogan first called Twitter an enemy of the public and then temporarily blocked access to the site before critical elections. In Russia, President Vladimir Putin has followed in the footsteps of many authoritarian nations and signed a law requiring that all influential online voices register with the government. Power is closely linked to the distribution of information. The Internet is only the newest technology to demonstrate this truth and elicit a reaction from those who seek to have or hold power.

This kind of reaction happens not because digital activism is a sufficient condition for transformative change. It obviously isn’t. This kind of reaction happens because digital activism is a new tool that enables bottom-up and leaderless movements to emerge. This power exists despite the fact that hashtag movements alone cannot organize or sustain conventional political institutions. At present, they are strongest in calling attention to injustice and demanding change. That is a good start.