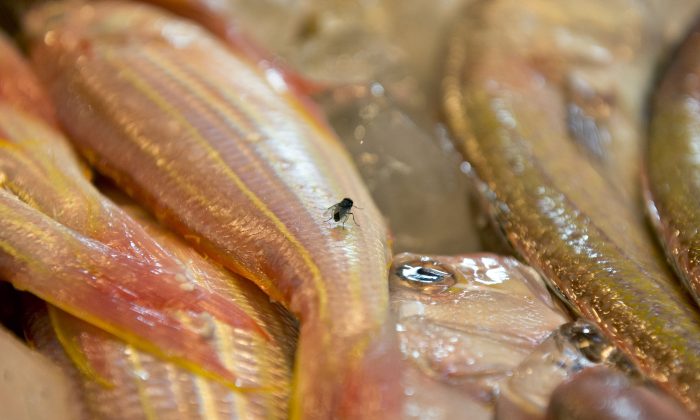 In a squalid fish farm in Yangjiang, Guangdong, farmers fed tilapia fish with the feces of pigs and geese to lower the cost of production. Contaminated with bacteria like salmonella, the manure made the fish highly vulnerable to diseases. From this farm, Chinese exporters bought these tilapia for low prices to sell to U.S. companies.

This situation, as reported by Bloomberg Business in 2007, is not an exception: Chinese farmers often grow fish in filthy conditions, resulting in the need to use large amounts of veterinary drugs to ensure their survival. But these chemicals can leave toxic residues on the seafood people consume.

Mr. Zhang, a resident of Guizhou Province, said that after the reservoir behind his home was contracted out to fish farmers, they degraded it into a toxic waste dump by over-breeding fish with the liberal use of animal manure, fertilizers and antibiotics.

In June 2007, the Food and Drug Administration (FDA) detained several farm-raised fish from China, including catfish, basa, dace (a kind of carp), and eel, due to unsafe residues of antimicrobial agents not approved for use in the United States. The antibiotics nitrofuran, malachite green, and gentian violet were shown to cause cancer after long-term exposure, while fluoroquinolones could cause antibiotic resistance.

The situation with wildly caught fish is not much better, due to widespread pollution of major fishing areas with trash, heavy metals, industrial waste, and chemical fertilizers. In 2011, the water of a majority of China’s largest lakes and reservoirs was labeled unsuitable for human consumption, according to a government report.

In the summer of 2013, the contamination released by a local chemical plant killed thousands of fish along a 19-mile length of river in Hubei province. Xinhua News Agency, one of the largest Chinese state-run media, reported that approximately 110 tons of dead fish were removed from the area.

Chinese farmers often grow fish in filthy conditions, resulting in the need to use large amounts of veterinary drugs to ensure their survival.

Fish farms only exacerbate the water contamination problem in China by releasing antibiotics and other chemicals into waters already heavily polluted.

The United States imports up to 90 percent of its seafood, about half of which are grown in aquaculture. In 2014, it imported $2.9 billion worth of seafood from China, including large amounts of tilapia, salmon, cod, shrimp, tuna, oysters, and scallops.

Of course, not all seafood imported from China is dangerous, and China is not the only country with low food safety standards. Other Asian countries, notably Vietnam, have also had problems involving seafood production in recent years.

But the Food and Drug Administration (FDA) inspects less than 3 percent of imports, and tests only 0.1 percent for chemical residues, according to a 2011 report by the General Accounting Office, an independent government agency. In addition, restrictions in China are lax, and with violations rampantly occurring across the country, government attempts at regulation are difficult to enforce.

Furthermore, some seafoods, like certain squid and Alaskan salmon, are caught in the United States, but sent to China for inexpensive processing in questionable conditions, before import back to the United States.

Jackie Arnett, a dietitian and food science and nutrition specialist for Everyday Health, a website producing content related to health and wellness, offers the following tips when choosing seafood to purchase.