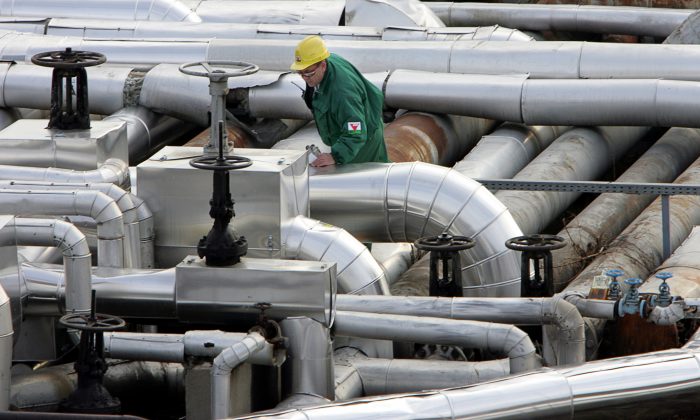 An engineer checks the refinery plant at the receiving station of the oil pipeline Druzhba in Szazhalombatta, some 30 kms south of Budapest, Hungary, on Jan. 9, 2007. (Attila Kisbenedek/AFP/Getty Images)
Business & Economy

The price of oil keeps moving in one direction—down. Even political tension between Iran and Saudi Arabia (historically a cause of price rises) has not stopped the drop. It may come as a surprise to some, but it drives home the point that it is not politics but market fundamentals that set prices.

The global marketplace is awash with crude, thanks in part to U.S. shale, Russia pumping at its limits, OPEC countries incapable of agreeing to a cap on production, Saudi Arabia remaining in a fierce price war with U.S. shale producers, and Iranian stocks entering the market. Industry stocks are as high as almost ever before.

Clearly, oil assets are on the losing side and the future does not bode well for global oil.

Demand also remains sluggish in emerging regions such as Asia. Wall Street augurs even see additional downward potential, suggesting $20 as a likely floor price—which is remarkable given that from 2010 to 2014, $100 oil was the “new normal.” In short, the market environment is soft, which is why oil futures traders are not paying heed to the hostilities between Iran and Saudi Arabia.

Oil giant BP reacted by shedding 4,000 jobs, while globally some $1.5 trillion of energy investment has been put into question. Clearly, oil assets are on the losing side and the future does not bode well for global oil. This, however, is for reasons related to climate change, not because of tumbling prices. Two actors are key: the U.S. government and financial investors.

In the United States, it is particularly the “independents” that have become squeezed. These are small to mid-sized companies which form the backbone of the recent shale gas revolution. So far, they have shown a remarkable ability to cope with an oil price spiraling downward, thanks to their innovative nature and their ability to cut costs and streamline production processes. Now, they have hit their limits. While some unconventional oil wells on the Barnett, Eagle Ford, or Bakken formations still break even at $30 a barrel, many no longer do, leaving the independents in the red.

Oil Keeps Falling. And Falling. How Low Can It Go?

The U.S. government’s decarbonization strategy, meanwhile, has a strong incentive to keep these independents alive and well. By and large it relies on replacing coal with gas, in addition to tougher power plant regulation. This strategy so far has worked thanks to lots of additional gas coming online as a byproduct of oil production, keeping the market oversupplied and gas cheap. A faltering shale oil industry therefore also questions whether a U.S. climate policy that relies on “market signals” remains sustainable.

If the events of 1998, when low oil prices brought the U.S. oil industry to its knees (and Russia went bust), are any good predictor, Washington will keep the industry from collapsing—so long as the independents are needed to help bridge America’s pathway into an unfolding low-carbon energy economy.

The finance industry, in turn, shows signs of a serious rethink in its fossil fuel investment strategy. To be sure, Wall Street and the City of London have valued oil—the world’s most actively traded commodity—as an investment opportunity. It is not only bankers who put their money into oil assets, but also managers of more conservative outfits such as pension funds, Ivy League university endowments, and insurance companies.

Yet, doubts are emerging over whether oil remains as attractive as it has been in the past. Already in 2013, Citibank, a global financial firm, declared that global oil demand was “approaching a tipping point” and that “the end is nigh” for growth. It cited the trends of substituting natural gas for oil, coupled with improvements in the fuel economy of vehicles, as the reasons.

Moreover, as the Paris climate deal of December 2015 underlines, there are significant social and environmental costs stemming from unabated climate change. The 196 world parties to COP21 acknowledged that humanity must therefore manage its remaining “carbon budget.” This means that it needs to limit, and eventually end, the use of fossil fuels, including oil.

As a consequence, many barrels of oil will need to stay in the ground as “stranded assets.” The volumes of oil that “cannot be used” by 2035 due to carbon restraints are projected at 500 billion to 600 billion barrels—roughly a third of today’s proven reserves. Some studies suggest that up to 80 percent of coal, oil, and gas reserves held by stock market listed companies cannot be burned and should be written off.

Some studies suggest that up to 80 percent of coal, oil, and gas reserves held by stock market listed companies cannot be burned and should be written off.

Reacting on this, the global insurance companies Allianz and Axa already announced an end to investing in coal. Oil is likely to follow. With the global divestment movement gaining further traction, there will be additional impetus from civil society to abandon oil. This is why some observers have already called on established international oil companies “to sell their existing oil reserves as quickly as possible.”

The future politics of oil present a fundamental and inescapable paradox.

Ultimately, the future politics of oil present a fundamental and inescapable paradox. As ironic as it is, it is the very same climate change imperatives that are helping to stabilize America’s oil industry in the short run while sounding its death knell in the long term. Going short on oil therefore makes both climatic and financial sense.