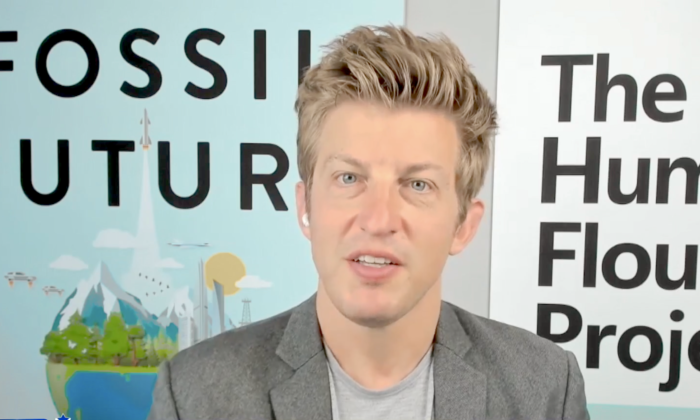 Philosopher and energy expert Alex Epstein in an interview with NTD's "The Nation Speaks" program in July 2022. (NTD/Screenshot via The Epoch Times)
Policies & Impacts

Contrary to the mainstream narrative that we need to urgently replace fossil fuels with renewable energy to counter disastrous global warming, philosopher and energy expert Alex Epstein said humans should use more fossil fuels to make humans safe and productive.

“If you think about it with a rational, pro-human, philosophical perspective, it’s actually obvious that we should use more fossil fuels,” Epstein told NTD’s “The Nation Speaks” program in a recent interview.

“We don’t talk about the benefits of fossil fuels, which, if you step back, that’s crazy,” said Epstein.

Nowadays, fossil fuels have been widely condemned for their CO2 emissions. Some environmental groups even called for phasing out natural gas, which largely contributed to the 32 percent reduction of CO2 emissions over the past 15 years—as the U.S. Energy Information Administration (EIA) stated.

According to EIA, burning fossil fuels for energy accounted for 73 percent of total U.S. greenhouse gas emissions in 2020.

Experts are saying that fossil fuels are reliable, efficient, abundant, easy to move, easy to generate electricity, and they produce many products we need, such as gasoline, diesel, plastics, fertilizer, and more.

Environmentalists, NGOs, the United Nations, and many governments are proposing to phase out fossil fuels urgently to limit global warming to 1.5 degrees Celsius above pre-industrial levels, a goal set in the Paris Agreement. In 2015, 196 countries or regions adopted the Paris Agreement.

On June 17, during the Major Economies Forum on Energy and Climate hosted by President Joe Biden, UN Secretary-General António Guterres urged governments to “end the age of fossil fuels.”

“The climate crisis is our number one emergency. Renewables are the peace plan of the 21st century, together with all the new technologies that President Biden has referred to,” the UN chief said in the meeting.

“We have to recognize that—most of our conversation doesn’t recognize—that the earth, including earth’s climate, is not at all hospitable to human life in its natural, so to speak, unimpacted state,” said Epstein.

“If human beings are going to have long, healthy, safe, opportunity-filled lives, we need to become extremely productive. There’s no way around that. If we are not productive, we will be poor, and we will be endangered. And that’s the fate of most people throughout history.”

Epstein said that for human beings to be productive, the key is to use machines to amplify or expand our abilities. Such as, a combine harvester that can harvest a thousand times more wheat than a farmer using manual labor, or an incubator can save the lives of millions of babies, which humans cannot do.

According to EIA, fossil fuels—petroleum, natural gas, and coal—accounted for about 79 percent of total U.S. primary energy consumption in 2021. On a global scale, fossil fuels account for about 80 percent of energy sources, per the International Energy Agency’s data.

Another great benefit of fossil fuels is that they help humans “master climate,” said Epstein.

“They give us such an ability to deal with things like heat and cold and storms and floods that our rate of disaster deaths from climate-related causes, like storms and floods, extreme temperatures, etc., is down 98 percent over the last century,” said Epstein, citing World Bank data.

Epstein did a lot of research and wrote a new book, “Fossil Future: Why global human flourishing requires more oil, coal, and natural gas—not Less.” The book was published in May.

Last year, a report by the World Meteorological Organization also said deaths from weather-related disasters reduced 3-fold, from over 50,000 deaths in the 1970s to less than 20,000 in the 2010s.

However, what made the report widely reported is its conclusion that weather-related disasters have increased by a factor of five over the past 50 years. The United Nations, governments worldwide, and the mainstream media used it as new evidence that climate change leads to more disasters, and we must act quickly to counter this threat.

However, Roger Pielke, Jr., a University of Colorado Boulder professor, said there was a lack of reporting on disasters before 2000. He found that from 2000 to 2021, global weather and climate disasters declined by about 10 percent. His conclusion is based on data kept by Belgium-based EM-DAT, which is widely viewed as an authoritative source for data on global disasters.

“The period since 2000 is viewed as the most reliable for data reliability, but it is safe to say that even since 2000, coverage has improved. So the 10 percent decline is possibly an underestimate,” Pielke said on Substack.

“If you’re focused on human flourishing, and we’re 50 times safer from climate, how can you claim climate as a disaster?” said Epstein.

Epstein said we should have an evaluation standard focusing on human flourishing.

“The standard by which many of our leaders are evaluating fossil fuels—including climate—is the standard of eliminating human impacts,” said Epstein.

Some scientists and environmentalists said human population growth and overconsumption lead to biodiversity loss, declining health, and climate change. An example of this is a 2021 report in Frontiers in Conservation Science.

“My view is, it’s good or bad, depending on how good or bad that warming, and also greening, is for humans, plus all the benefits of all the energy that comes with it,” said Epstein.

Epstein said it’s a “scam” to push for a rapid transition from fossil fuels to renewable energies.

“We’ve been hearing about renewable alternatives for 20-plus years. They’ve got massive subsidies. That should be suspicious because if they’re so good, why do they need subsidies? They have all sorts of preferences, including absolute mandates that we use them, and they’re still 3 percent of the world’s energy?”

Epstein said it’s very important to know that fossil fuels provide 80 percent of the world’s energy, and billions of people are still “starved of energy.”

Last month, a peer-reviewed study found the transition to wind and solar is more expensive and environmentally nonviable.

“If wind and solar were truly cheaper—in a free market economy—they would not require trillions of dollars of government funding or subsidies, or laws to force their installation,” said the study (pdf).

A Danish environmental expert Bjorn Lomborg also doesn’t think the energy transition by 2050 is feasible. His new book “False Alarm: How climate change panic costs us trillions, hurts the poor, and fails to fix the planet” was published last October.

“We’re not achieving our goals,” said Lomborg. “It’ll be fantastically costly. Bank of America, McKinsey, and many others talk about the cost of $5 trillion or more per year. Nobody’s willing to pay this. So we need to find a smarter, cheaper, and more effective policy.”