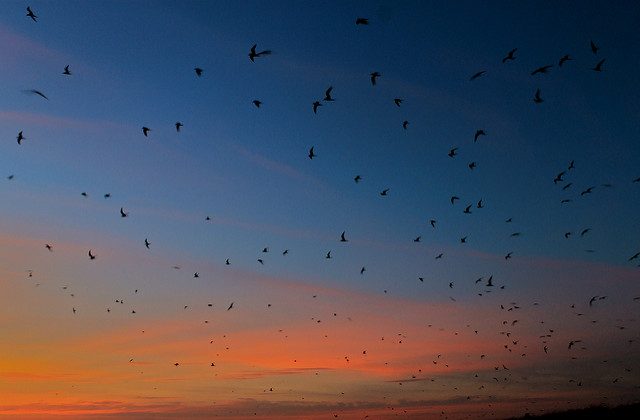 Why We Need Global Action to Protect Migratory Birds

One hundred years ago, amid the chaos of World War I, President Woodrow Wilson and King George V of Great Britain turned their attention to a surprising issue: protecting migratory birds. On August 16, 1916 they signed the Migratory Bird Treaty, a landmark conservation agreement. The treaty and the Migratory Bird Treaty Act, which wrote its provisions into U.S. law, protected more than 1,100 migratory bird species by making it illegal to pursue, hunt, take, capture, kill or sell live or dead birds, feathers, eggs and nests, except as permitted through hunting regulations for game birds.

Why did migratory birds warrant so much attention? Hunters were decimating bird populations across North America (King George signed the treaty representing Canada). Some five million birds, especially waterbirds like egrets and herons, were dying yearly to provide feathers to adorn hats. The last known passenger pigeon had died just two years earlier at the Cincinnati Zoo. Fearing that other species would meet the same fate, national leaders took action.

Today we know much more than early conservationists did about the value of birds. Healthy bird populations provide valuable ecosystem services: They pollinate crops and help plants grow by dispersing seeds and preying on insects.

Migratory birds also contribute billions of dollars to the U.S. economy alone through recreational activities like hunting and birdwatching. And they connect us with nature, especially through the dazzling spectacle of migration.

We also know that they face many threats. International cooperation under the Migratory Bird Treaty and subsequent agreements virtually halted the plume trade and most unregulated harvest, but today habitat loss, invasive species, pollution and collisions with buildings and other structures are taking heavy tolls on many species. Everything we learn about how widely migratory birds range around the globe underlines the need for coordinated international action to protect birds across borders.

Migratory birds don’t recognize international boundaries. In one year, an individual warbler may spend 80 days in the boreal forests of Canada, 30 days in the United States at resting and refueling sites during migration, and over 200 days in Central America.

At the Cornell Lab of Ornithology we have constructed maps and animations using data collected by volunteers for eBird, the world’s fastest-growing biodiversity database. These resources illustrate how migratory birds connect countries. In the figure below, which tracks 118 species that breed in North America, we see that they spend the year in locations that span the Western Hemisphere.

The eastern-breeding Magnolia Warbler, for example, spends winters in areas in the Yucatan Peninsula and Central America that are fractions of the size of its breeding range. Seeing how densely these birds are clustered in their winter habitat shows us that each acre of that territory is more important to their survival than we ever realized.

Similarly, most populations of the western-breeding Western Tanager overwinter in Mexico. By identifying where bird populations winter in this way, we can better target conservation actions to protect species throughout their annual cycles.

Strategies for the Next Century

International cooperation to conserve migratory birds takes many forms, from agreements restricting trade in certain species to partnerships that address specific challenges. The most important threats to migratory birds today are loss and degradation of habitat, which can be caused by land conversion—for example, clearing forests for farming—or by climate change. Because migratory birds rely on so many different locations from season to season, joint efforts to protect habitat are especially important and urgent.

Birds associated with oceans and tropical and subtropical forests year-round are in the most dire straits. More than half of North American seabirds are declining due to pollution, unsustainable fishing, energy extraction, pressure from invasive species and climate change. Birds that rely on coasts, arid lands and grasslands also are in serious decline.

There are no easy solutions, in part because successful conservation efforts must reach across countries to all of the places birds touch over the course of a year. But new science is supporting these efforts. Through transformational citizen science projects like eBird, we are developing vast data sets to help pinpoint where conservation action should focus—and, consequently, where we need to find partners in the places where birds breed, overwinter and stop over during migration.

Many bird conservation groups and government agencies are paving the way forward. As examples, they have formed international teams to eradicate invasive predators on islands that are critical to breeding seabirds, and drafted multinational agreements to clean up large floating mats of garbage in our seas that can choke, trap or poison seabirds and other animals.

They come together in organizations like the Western Hemisphere Shorebird Reserve Network, which is working to protect nearly 100 key migratory shorebird sites from Alaska to Tierra del Fuego. And they engage decision-makers so that legislation like the U.S. Farm Bill includes programs to help landowners conserve habitat.

Bird conservation is also about people. Many nonprofit groups, such as the American Bird Conservancy, work with in-country partners to develop practices that meet local community needs while conserving bird habitat. Approaches like this are an essential part of conservation, especially in working landscapes that support already struggling communities.

At a time when political divisions dominate the news, the Migratory Bird Treaty and subsequent international collaborations show the power of countries acting together. Birds are a shared resource among nations, and where we have acted, we have successfully protected migratory birds and the habitat they depend on.

Amanda Rodewald, Professor and Director of Conservation Science, Cornell Lab of Ornithology, Cornell University. This article was originally published on The Conversation. Read the original article.