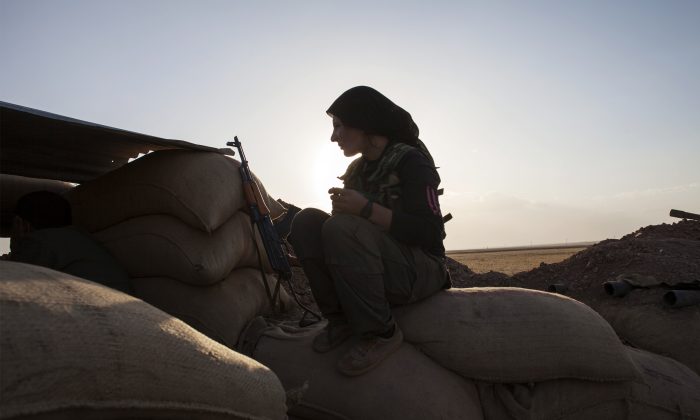 A fighter of the Kurdish of the Kurdish Women's Defense Units (YPJ) sits on sand bags as she holds a position on the front line in the Kurdish town of Derik (al-Malikiyah in Arabic), in the northeastern Hasakeh governorate on the border with Turkey and Iraq, on Oct. 19, 2013. Kurdish fighters from several villages in oil-rich Hasake province are engaged in combat against al-Qaida affiliated groups the Islamic State of Iraq and Syria (ISIS) and Nusra Front, said the Syrian Observatory for Human Rights. (Fabio Bucciarelli/AFP/Getty Images)
Middle East

Why We Fight: How Female Combatants Factor Into Kurdish State-Building

Kurdish women have diverse reasons for waging war on ISIS, but are they being used to romanticize the effort?
By Marie Lamensch

Women have been a part of the Kurdish military forces in Iraqi Kurdistan and the People’s Protection Unit (YPG) in the Kurdish region of Syria for decades, fighting alongside men to achieve the nationalistic goals of Kurdish rebel movements.

The Patriotic Union of Kurdistan in Iraq created the first female unit in 1996. In Syria, the Women’s Protection Unit (YPJ) was founded in 2013 as the autonomous armed wing of the Democratic Union Party (PYD) and the female equivalent of the YPG.

Often seen wearing their hair loose or in a ponytail, carrying Kalashnikovs, they look young, determined ,and at least as courageous as their male counterparts.

Today, female recruits, like men, take up arms to protect their people and other minorities from ISIS and chase the extremist group from what they consider as their territories. Often seen wearing their hair loose or in a ponytail, carrying Kalashnikovs, they look young, determined, and at least as courageous as their male counterparts.

The “phenomenon” of female Kurdish fighters battling the Islamic State in Iraq and Syria has caught the attention of Western media, which usually depicts them as heroic, highly trained combatants willing to sacrifice their lives to defeat the brutal invader that is ISIS. In the chaos of the Middle East, these female fighters appear as a light in the dark. At least that’s what the media is trying to tell us.

A simple online search of “Kurdish female fighter” on Google reveals that most articles date from 2014 onward. There is very little pre-dating the emergence of ISIS. From a Guardian feature on the “women taking on ISIS” to a three-part VICE series, the attention on the group has clearly increased only recently.

As Al Jazeera explored in 2014, where does this sudden fascination with “‘badass’ Kurdish women” come from?

It could be argued that in the complicated war against ISIS, Kurdish movements, such as the Kurdistan Workers’ Party (PKK), have an interest in promoting the image of the brave female warrior.

By showing that women are part of military units, they promote a narrative of gender equality and emancipation, and in doing so, set themselves apart from extremist groups such as the Islamic State, renowned for its brutal treatment of women.

This differentiation allows them to gain some legitimacy. Indeed, the YPG/YPJ are ideologically affiliated to the PKK, which is regarded as a terrorist organization by the United States and the European Union for its actions against Turkey. Promoting a narrative of gender equality could very much be part of an attempt to move from “terrorists” to liberating forces capable of freeing Kobane from ISIS or saving the Yazidis on Mount Sinjar.

This is not to say that Kurds necessarily “parade” their female fighters in front of foreign correspondents, but the conflict in Syria has long taught us that the war is also taking place in the media (as the hashtag #TwitterKurds shows).

For example, in a music video, “Hello Luv,” the daughter of a Peshmerga fighter, sings, “I am a Kurd and I am their enemy. But the most important thing is for the world to know that ISIS isn’t just the Kurds’ enemy; it’s the world’s enemy.”

What the media fails to look at are the more complex reasons why Kurdish women are taking up arms.

More tellingly, a Kurdish fighter named Rehana—the “angel of Kobane” who allegedly killed more than 100 ISIS fighters—became something of a poster figure for the Kurds’ fight against ISIS thanks to a tweet. Yet, as the BBC discovered, it turned out not to be true. While the tweet was not originally posted by the Kurds, they embraced the publicity.

The pro-active role of Kurdish women is often put in contrast to the treatment by ISIS of women who live under its rule, described in the extremist group’s manifesto on women. It is also in stark contrast with the way women are treated in Saudi Arabia or Iran.

We are therefore fascinated by these women not only because of their courage, but also because they defy our often mistaken idea of the subdued Middle Eastern women who need to be saved.

However, what the media fails to look at are the more complex reasons why Kurdish women are taking up arms.

As a female recruit told journalist Vager Saadulah, “They came to occupy our land and raped Yazidi girls, so we have to defend our dignity and honour.”

These women are not simply defending their people and their land, they also see their armed struggle as an opportunity to escape the patriarchal societies they still live in, societies in which women are still expected to marry young and have children. However, the use of these women for “propaganda” or PR purposes is proof that women are still being instrumentalized.

These women are not simply defending their people and their land, they also see their armed struggle as an opportunity to escape the patriarchal societies they still live in.

How many women actually fight on the frontlines seems difficult to know. They probably remain a minority. An interview on LCP, a French public television station, makes it clear that most Kurdish women do not usually have access to education.

When they join the YPG/YPJ, women learn how to read and write. Viyan, whose story is one of the main focuses of the report, says she joined the guerilla fighters at 18 without informing her family because it was a way to get out of her upcoming marriage.

Her father was against the decision, saying that “In our culture, we don’t like freedom of women. Women should not have command over men. However, this is what the party wants.”

Viyan’s sister, who is married with children, wishes she had done the same: “She is risking her life but at least she has peace and quiet.”

Instead of taking an orientalist-like fascination in these female fighters, we should acknowledge that Kurdish women have long been fighting for their rights as part of Kurdish nationalist movements. Romanticizing their armed participation against ISIS fails to capture the reality of their struggle.

Looking at the state of women’s rights in Iran, Iraq, or Saudi Arabia, Kurdish communities have distinguished themselves by accepting some form of gender-mainstreaming, as shown in a 2012 survey on the health and social status of Iraqi women. It is nonetheless because of continuing challenges and a lack of gender equality that these women seek to empower themselves by fighting alongside their male counterparts.

Marie Lamensch is a researcher, social media manager, and assistant to the director the Montreal Institute for Genocide and Human Rights Studies.

This article was first published by OpenCanada.org