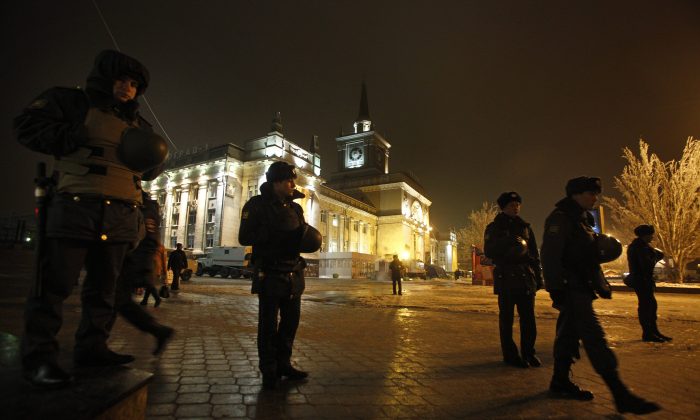 Police officers guard near the Volgograd main railway station, background, in Volgograd, Russia early Monday, Dec. 30, 2013. A bomb blast tore through a trolleybus in the city of Volgograd on Monday morning, killing at least 10 people a day after a suicide bombing that killed at least 17 at the city's main railway station. Volgograd is about 650 kilometers (400 miles) northeast of Sochi, where the Olympics are to be held. (AP Photo/Denis Tyrin)
Europe

Terrorists targeted Volgograd, Russia—600 miles from Sochi and about the same distance from Moscow—on Sunday and Monday. The attacks left 31 dead, left the world to wonder where the next attack might take place, and left analysts to ponder the tactic behind the location choice.

Volgograd has a population of 1 million, comparable in size to a dozen or more Russian cities.

The Volgograd train station, which was the first target, is an important hub, but that’s not likely the reason it was attacked, said Dmitry Trenin, director of the Carnegie Moscow Center.

“Volgograd, formerly Stalingrad, a symbol of Russia’s tragedy and triumph in World War II, has been singled out by the terrorists precisely because of its status in people’s minds. Their aim was to hurt Russia’s pride, as well as its people,” Trenin wrote in a post on the center’s website.

The two suicide bombings, one at a train station and the other on a bus, are thought to be perpetrated by insurgents seeking to create an Islamic state in the North Caucasus region.

Trenin said the attacks were likely meant to disrupt New Year’s celebrations, as this is the most important holiday of the year for Russians. Although the attacks occurred about a month before the Winter Olympics are set to start in Sochi, Trenin said it is not certain that they are linked to the Olympics.

New Year’s celebrations were canceled in Volgograd, and authorities asked residents not to ignite firecrackers. More than 5,200 security forces were deployed in Volgograd, a police official told Interfax news agency, though he did not say how this compares with normal security levels in the city.

He told Radio Free Europe: “Because now, with the Olympics coming up, … [security forces will] be forced to think not only about ensuring the safety of the major Russian cities as well as Sochi and the infrastructure around the Olympic facilities.

“On top of that, they’ll also have to pay special attention to Volgograd. It’s an effective tactic—diverting attention away from a place where the terrorists may be planning their next attack.”

Dmitry Malashenko, a Caucasus expert with Carnegie Moscow, said the attack in Volgograd means authorities must be prepared for an attack anywhere in Russia.

“It’s clear there’s some kind of smooth-functioning system [in Volgograd] that suits someone’s purposes. Whether that someone is an organization, locals, or people from outside, we don’t know,” he told Radio Free Europe.

Soldatov, quoted by the Christian Science Monitor, warned: “There is no reason to assume that Sochi and Moscow are safe, just because they’re hitting Volgograd.”