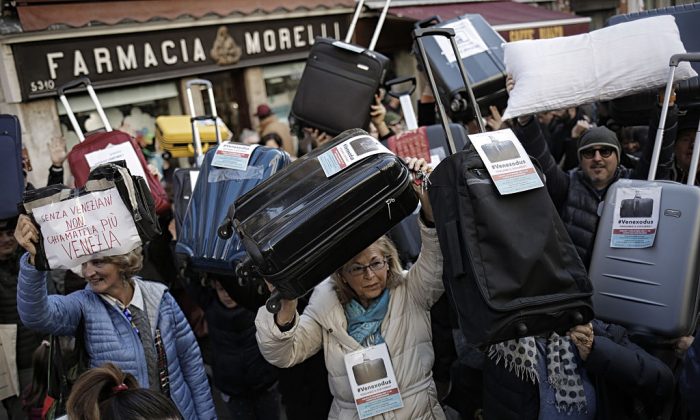 People hold suitcases and signs as they demonstrate against the increasing number of tourists in Venice on Nov. 12, 2016. (MARCO BERTORELLO/AFP/Getty Images)
Europe

“Though there are some disagreeable things in Venice, there is nothing so disagreeable as the visitors,” said the American writer Henry James of the famous Italian lagoon city in which he took several vacations toward the end of the 19th century.

Even today, James’s words resonate strongly among Venetians, despite the city’s centuries-long history of cultivating tourism.

“It’s like taking sugar in your coffee: You enjoy the taste, but if you have too much of it, it’s not so enjoyable,” said Marco Gasparinetti, who formed Veneziamiafuturo (Venice, My Future), an activist group for residents.

Venice was once known as La Serenissima (“the most serene”), a harmonious place where locals and their guests “chimed gracefully alongside each other,” Gasparinetti said. But as low-cost flights and huge cruise ships ushered in an era of mass tourism, authorities have been left grappling with a challenge that has not only exasperated those who live there but also endangered the city’s coveted status as a UNESCO World Heritage site.

The wake of cruise ships is contributing to the erosion of the city’s foundations, while increased foot traffic and litter left behind by tourists are damaging the city’s historic streets. In 2014, UNESCO threatened to place Venice on its World Heritage in Danger list if Italy did not take steps to manage the effects of tourism on the city.

“It’s not that we don’t want visitors; it’s part of our economy,” Gasparinetti said. In 2015, the tourism industry was worth more than $3 billion. “But we’ve reached a point where visitors do not enjoy Venice anymore, and we do not enjoy visitors.”

Tensions between locals and visitors hit a boiling point last summer, when flyers appeared throughout the city bearing the blunt message, in English, “Tourists go away! You are destroying this area!”

The flyers appeared days after a visitor from New Zealand hit a water taxi while drunkenly attempting to jump into the highly polluted canal for a swim. Mayor Luigi Brugnaro took to Twitter to vent his anger, threatening prison time for delinquent tourists.

The changes brought by mass tourism have contributed to an exodus of locals: The population of Venice’s historic city center, including most of its islands, has fallen from a peak of about 175,000 in 1951 to some 55,000 today. Ahead of this year’s summer siege, activists have hung banners saying “Resitenti Residenti” (“Residents Resist”) in a plea to keep locals in the city.

Gasparinetti says many have been driven away by the inconveniences brought to daily life by accommodating tourism. “We cannot take water-taxis anymore because they are overcrowded. All the shops we need, like grocery stores, have disappeared and been replaced by those selling cheap products. This is daily life.”

He points the blame mainly at cruise ships, which between them have the capacity to offload as many as 30,000 people each day onto Venice’s narrow streets and waterways. The total number of tourists on any given day can reach 90,000, far outnumbering residents.

“They don’t buy anything, they leave a lot of garbage [on the street], and we pay the taxes for the garbage they leave,” he said, adding that the situation won’t improve until authorities set limits on the number of tourists. “We must be honest: If we want to be good hosts, we must define the threshold.”

Establishing that threshold is no easy task. The reported number of visitors Venice attracts each year ranges between 22 million and 30 million, but nobody knows the precise figure, said Paola Mar, the city’s tourism chief.

Mar said the city council will soon implement a headcount system whereby the flow of tourists will be monitored and regulated at key arrival points. A campaign to make tourists more aware of less-visited areas, such as other islands in the lagoon, and to promote the appeal of visiting the city during the off-season, will also be rolled out.

“We’re a city that lives on tourism, and we need to strike a balance between residents and tourists,” Mar said.

Leaders recently came under fire for suggesting they could charge tourists to enter the most popular attraction, St Mark’s Square, but the idea has now been scrapped, Mar confirmed.

The city has also made efforts to preserve “decorum and tradition” by targeting fast-food outlets, with a ban now in place on the opening of new kebab and pizza slice shops. Meanwhile, there are plans to develop picnic areas to help deter visitors from eating takeout food in the street.

“The idea is to improve customer care and not just be prohibitive. But things must be done in a way so that the city is respected,” Mar said. “Rules around decorum are not just for those who come from the outside, but those who live here too.”

Venice has a long history of promoting tourism, starting in the late 18th century, and has been innovative in developing events that attract guests in droves, whether it be the annual carnival, the Biennale international art exhibition, or the star-studded film festival. With this in mind, tourism is perhaps not quite the problem that people perceive it to be, argued Dominic Standish, a British professor of sociology and author of the book “Venice in Environmental Peril? Myth and Reality.”

“Historically, the city has coped with vast numbers of people,” he said.

“Venetians were cultivating these festivals to bring people in even when the city was really overpopulated.”

With some of the recent rules seemingly aimed at people who have less money to spend, Standish concludes, in an echo of Henry James’s quote, that the “elitist criticism of mass tourism” is perhaps at the crux of the hostility.

“Reducing cheap food outlets, or the idea of charging people, discriminates against the poorer tourists,” he said. “A lot of it harks back to this idea that Venice is for elite visitors—people who’ve got money to stay in the city and hotels and eat in restaurants.”