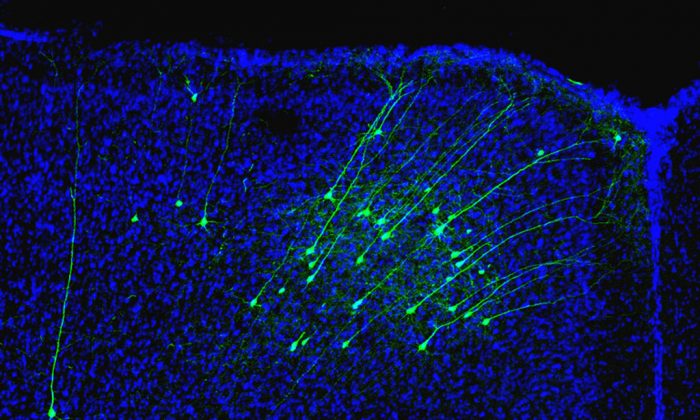 Why Trying to Listen Makes Us Freeze in Place

To listen to someone carefully, we first stop talking and then stop moving entirely. This strategy helps us hear better because it cuts unwanted sounds generated by our movements.

This interplay between movement and hearing also has a counterpart deep in the brain. Indirect evidence has long suggested that the brain’s motor cortex, which controls movement, somehow influences the auditory cortex, which gives rise to our conscious perception of sound.

A new study, appearing online in Nature, reveals exactly how the motor cortex, seemingly in anticipation of movement, can tweak the volume control in the auditory cortex.

The new lab methods allowed the group to “get beyond a century’s worth of very powerful but largely correlative observations, and develop a new, and really a harder, causality-driven view of how the brain works,” says the study’s senior author Richard Mooney, a professor of neurobiology at Duke University School of Medicine, and a member of the Duke Institute for Brain Sciences.

The findings contribute to the basic knowledge of how communication between the brain’s motor and auditory cortexes might affect hearing during speech or musical performance. Disruptions to the same circuitry may give rise to auditory hallucinations in people with schizophrenia.

In 2013, researchers led by Mooney first characterized the connections between motor and auditory areas in mouse brain slices as well as in anesthetized mice. The new study answers the critical question of how those connections operate in an awake, moving mouse.

“This is a major step forward in that we’ve now interrogated the system in an animal that’s freely behaving,” says David Schneider, a postdoctoral associate in Mooney’s lab.

Mooney suspects that the motor cortex learns how to mute responses in the auditory cortex to sounds that are expected to arise from one’s own movements while heightening sensitivity to other, unexpected sounds. The group is testing this idea.

“Our first step will be to start making more realistic situations where the animal needs to ignore the sounds that its movements are making in order to detect things that are happening in the world,” Schneider says.

The Brain’s ‘Game of Telephone’

In the latest study, the team recorded electrical activity of individual neurons in the brain’s auditory cortex. Whenever the mice moved—walking, grooming, or making high-pitched squeaks—neurons in their auditory cortex were dampened in response to tones played to the animals, compared to when they were at rest.

To find out whether movement was directly influencing the auditory cortex, researchers conducted a series of experiments in awake animals using optogenetics, a powerful method that uses light to control the activity of select populations of neurons that have been genetically sensitized to light.

Like the game of telephone, sounds that enter the ear pass through six or more relays in the brain before reaching the auditory cortex.

“Optogenetics can be used to activate a specific relay in the network, in this case the penultimate node that relays signals to the auditory cortex,” Mooney says.

More specifically, the team found that movement stimulates inhibitory neurons that in turn suppress the response of the auditory cortex to tones.

The researchers then wondered what turns on the inhibitory neurons. The suspects were many. “The auditory cortex is like this giant switching station where all these different inputs come through and say, ‘Okay, I want to have access to these interneurons,'” Mooney says. “The question we wanted to answer is who gets access to them during movement?”

The team knew from previous experiments that neuronal projections from the secondary motor cortex (M2) modulate the auditory cortex. But to isolate M2′s relative contribution—something not possible with traditional electrophysiology—the researchers again used optogenetics, this time to switch on and off the M2′s inputs to the inhibitory neurons.

“I couldn’t contain my excitement when we first saw that result,” says Anders Nelson, a neurobiology graduate student in Mooney’s group.

The Helen Hay Whitney Foundation, the Holland-Trice Graduate Fellowship in Brain Sciences, and the National Institutes of Health supported the work.