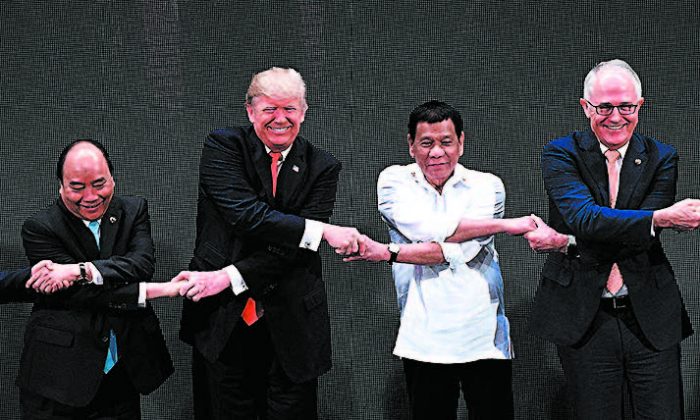 Why Trump’s Asia Trip Was a Success

Contrary to mainstream media reporting, the president delivered on his three core goals
By Tian Yuan

Was President Donald Trump’s Asia trip a success? According to American mainstream media, no.

Bloomberg said his trip “lacked breakthroughs.” The Washington Post alleged his trip “was hardly the success he says it was.” In an incoherent diatribe, The New York Times’s Thomas Friedman claimed that Trump was played and duped by China so much that “China could sell Trump the Brooklyn Bridge.” Susan Rice, the national security adviser under former President Barack Obama, scolded Trump for “making China great again.” Harry J. Kazianis in The Week did not aim for subtlety; he asserted that Trump’s Asia trip was “disastrous.”

For the mainstream media, Trump can do nothing right. Even his taking a sip of water during his remarks upon his return from Asia was a subject of controversy and mockery. Why does Trump always have to forcefully defend himself and equally forcefully slam the media? Because the mainstream media is not interested in covering him neutrally. They don’t want to accept the fact that he is the president; they want him to fail. More importantly, they are eager to contribute to his downfall.

Trump said this Asia trip “was defined by three core goals”: to insist on free and reciprocal trade; to strengthen America’s alliances and economic partnerships; and to unite the world against the North Korean nuclear menace. Let’s take a look at what Trump accomplished in Asia and compare his deeds to his words. I will let you be the judge.

One of the goals was to promote Trump’s trade philosophy. At the Asia-Pacific Economic Cooperation CEO summit, Trump laid out his vision for a new international order for trade under America’s leadership.

The trade relationship must be “fair and reciprocal.” For too long, the United States has been a dumping ground for cheap foreign imports. We opened our markets to our trading partners, but when American businesses tried to enter our partners’ markets, they were bludgeoned by tariffs, non-trade barriers, and predatory regulations. Trump is the first U.S. president in three decades to decide to do something about it.

Additionally, the United States will preferentially seek bilateral trade deals, which are less likely to violate our sovereignty, while offering more latitude in enforcement. The World Trade Organization is a giant mess. Its dispute settlement mechanisms are a joke: One can win a judgment, but in the end still lose.

Finally, Trump declared that the United States will not tolerate theft of intellectual property and economic aggression. While it is widely accepted that economic espionage is a grave threat to the United States, it is extremely difficult to quantify the damage. Various sources estimate the cost is in the range of $445 billion to trillions of dollars.

If the Trump administration follows through on the proposal, our trading partners that export to the United States will have to buy an equivalent dollar amount of our goods, leading to more balanced trade, if not eliminating the trade deficits outright. Bypassing the WTO, the United States will not be constrained by its Byzantine rules. China can wreak whatever havoc it wants there, as far as we are concerned. Moreover, if we can stop China from stealing our technology and trade secrets, America’s leadership position in industrial R&D will be strengthened.

Trump’s new trade paradigm is definitely not music to the ears of China’s leadership, but more like a “giant sucking sound,” as former presidential candidate Ross Perot described the sound of jobs exiting the United States due to the trade deal NAFTA. Trump’s trade policy will not make China great again. Au contraire, it ought to make the communist regime very nervous. Expect Beijing to fight back vigorously to thwart Trump’s trade agenda.

Since the end of World War II, the United States has opposed communist expansion in the Asia-Pacific; since the end of the Vietnam War, it has maintained peace in the region. The United States has enormous economic interests and a towering military presence there, but does not seek territorial expansion or dominance, making it “the least distrusted” power among Asian governments, according to Nick Bisley, a professor at La Trobe University in Australia.

China’s quick rise and massive military buildup have alarmed many of its Asian neighbors. Meanwhile, America’s influence in Asia has been perceived to be waning. Moreover, our Asia-Pacific allies have felt they were neglected while facing a plethora of economic and security problems at home and abroad.

Trump went to Asia “to strengthen America’s alliances and economic partnerships.” His first move was promoting the term “Indo–Pacific,” in lieu of the more conventional “Asia–Pacific.” India, an emerging power, is thus given a more prominent role in the region. A senior Trump administration official told Politico there was a “concerted effort” to affirm the U.S.–India relationship. Countering China’s influence appears to be one of the goals.

Japanese Prime Minister Shinzo Abe is an enthusiastic supporter and early adopter of the “Indo–Pacific” concept. As early as 2012, Abe called for an alliance between Japan, India, the United States, and Australia, known as “Asia’s democratic security diamond.” Trump’s embrace of the new language, and Australia’s openness to the alliance, indicate it is closer to becoming a reality.

Trump agreed to enhance naval cooperation with Vietnam and renewed ties with the Philippines during his trip. In Manila, Trump also assured the leaders of the Association of Southeast Asian Nations that “no one owns the ocean,” a tacit jab at China’s territorial claims in the South China Sea.

All of the above is bad news for China. As more Asian countries choose to be part of the Indo–Pacific alliance, fewer will fall into China’s orbit. How does this make China great again?

The final goal of Trump’s Asia trip was to unite the world against the North Korean nuclear threat.

Japan and South Korea announced additional sanctions against North Korea entities after Trump’s visit. Both countries agreed to share defense costs with the United States and to ramp up their own military spending.

Even Vietnam, historically a communist ally of North Korea, agreed to enforce sanctions against the hermit kingdom.

One day after Trump wrapped up his Asia trip, China announced on Nov. 15 that it would dispatch a special envoy to North Korea on Nov. 17. The announcement was laconic and cryptic, as usual. No agenda or meeting details were disclosed. But analysts believe this is a sign that Trump’s pressure on China is working.

“The timing strongly suggests that this is in response to the Trump trip,” Robert Kelly, associate professor of political science at Pusan National University in South Korea, told the Los Angeles Times.

The envoy may eventually turn out to have been a dud. We don’t know if the denuclearization issue was brought up. Even if it was discussed, there is no guarantee that Kim would abandon his nuclear brinkmanship. It is premature to call Trump’s North Korea maneuver a success. But to call it a failure or disaster is off the wall.

In the media frenzy to portray Trump as a worse-than-Neville-Chamberlain villain before and after his Asia trip, nothing tops this: Someone sincerely believed Trump’s Asia trip could have gotten us all killed. This individual, writing for Esquire, said he hoped “we’re all alive when he gets back.”

The world didn’t end. We are all alive. The anxious Esquire columnist reveals one thing: There are people who suffer from an irrational fear of anything and everything that Trump does. What is that condition called? Trump-phobia.