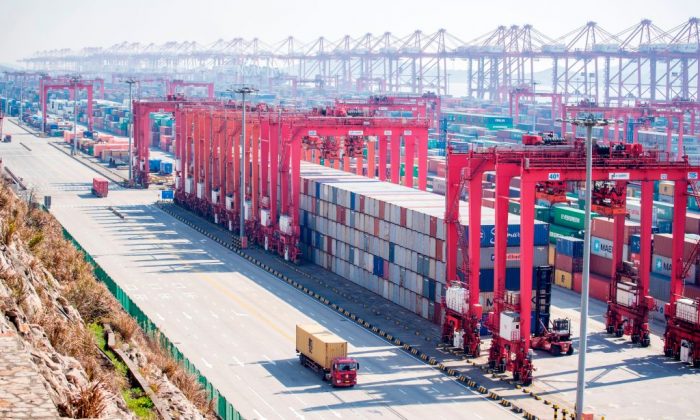 Why Trade With China Is Not Free

Trade is good. Whether domestic or international, it allows for the specialization of production, making it more efficient and thus saving resources. It emphasizes the strength of different people and different countries where everybody can bring their best products to the table, making up for weaknesses in other areas of a nation’s economy. It’s a win for everyone.

Trade with China is not like that. But is U.S. Trade Representative Robert Lighthizer correct in calling China “a threat to the world trading system”?

A comparison of trade with China to true trade shows that trading with China is not a win-win, in the spirit of classical economist David Ricardo. And previous U.S. administrations have contributed to the problem.

So, let’s assume China has a $100 surplus with the United States after one year because it can produce widgets more cheaply, due to its lower labor costs (in reality, this deficit was $347 billion in 2016 for goods, and Chinese companies receive massive subsidies to dump their products on world markets).

In this scenario, Chinese private companies and citizens would end up having a balance of $100 that they could use to do two things. One, they could send it right back by buying higher-value American goods or services that they cannot yet produce with the same quality—like cars, for example—bringing the trade balance closer to zero again in the next period.

China is not about free trade. It has an official policy of exploiting trading partners for its advantage to achieve strategic autarky.

If the Chinese don’t see any American products worth buying, they could choose to invest their dollar balance in the American capital markets. In a truly free system without much government interference, this would not be in U.S. Treasury notes, but in stocks, real estate, or even new greenfield projects.

Either way, this investment in the U.S. capital markets, either directly or indirectly via banks, would make the United States more productive as capital investment always does, and after a while and enough investment, more competitive U.S. products would lead to a turnaround in the trade deficit.

This system worked very well under the gold-standard of the belle epoque before World War I, an era of unprecedented growth in prosperity for everyone involved. It was helped by a sound money system and fixed exchange rates, which made capital investments easier by removing exchange rate risk.

Today’s reality is slightly different, which is why the United States had persistent deficits vis-à-vis China for more than a decade, resulting in a cumulative trade deficit of $3.36 trillion from 2001 to 2016.

Instead of Chinese companies and individuals buying American products or investing in private American capital, the Chinese regime is printing money to buy the US$100 earned by companies that are often state-owned and then putting this money into U.S. Treasury notes.

This interference in the marketplace has several major effects on the naturally balancing force of competition and free trade.

The Chinese exchange rate is artificially lowered because the central bank is printing money to buy the dollars from state merchants, driving up the price of the dollar. This makes American products less competitive in two ways.

This relatively basic analysis leaves aside the intricacies of the very raw deal former President Bill Clinton negotiated with China during its WTO accession.

First, it lowers the Chinese exchange rate, making foreign products more expensive. Second, it artificially stimulates economic activity and investment in China through lower interest rates, creating excess capacity and making Chinese products even cheaper than they normally would be just because of cheaper wages alone.

On the American side, instead of investment into private capital, trillions of dollars of the Chinese surplus go into funding the U.S. government’s debt. By all accounts and measures, the investment in U.S. Treasury bonds has failed to increase the productivity of the American economy enough to compete with Chinese products, leading to chronic and hidden unemployment, as the headline unemployment number doesn’t reflect the millions of people who have left the labor force.

So in the current setup, it’s more like two governments trading with each other and reaping the benefits, rather than private individuals and companies. The result has been persistent deficits on one side, and persistent surpluses on the other side.

Of course, the U.S. consumer has somewhat benefited through cheaper goods, but this is hardly consoling. Millions of jobs have been lost, and many of those cheaper goods have been bought with government money through welfare transfer payments.

The administrations of presidents George W. Bush and Barack Obama did little to change this situation. Both administrations were dependent on the constant flow of Chinese trade dollars into an ever-expanding U.S. government debt. Under Bush, the debt grew by almost $5 trillion. Under Obama, it grew by more than $9 trillion. Some criticism and a small temporary tariff here and there did nothing to change these dynamics.

President Donald Trump’s small government and America-first stance explain the about-face in rhetoric, although so far tough action has been lacking. However, Trump has ordered an investigation into the Chinese regime’s intellectual property theft. and if the investigation finds systemic IP theft, this could result in the toughest penalties the United States has yet leveled on China’s trade practices.

This relatively basic analysis leaves aside the intricacies of the very raw deal former President Bill Clinton negotiated with China during its WTO accession and the fact that China has been flaunting even these generous rules to make the situation for American companies and workers even worse.

According to WTO accession rules, China was supposed to bring down average tariffs on industrial goods to 8.9 percent and 15 percent for agricultural products until 2010, for example. However, the 2016 WTO tariff brochure indicates China still has an average tariff for all goods of 10 percent, compared to the United States’ tariff of 3.5 percent.

So even according to WTO rules, China has a huge competitive advantage over American products, given prevailing tariff rates alone.

In addition, despite its free-trade rhetoric, China officially has an innovation-mercantilist trade policy, as outlined in its “Made in China 2025 Strategy” and the “13th Five-Year Plan for Science and Technology.” These plans help make clear why Robert Lighthizer’s accusation that China is a threat to the world trade system isn’t so far off the mark.

“Chinese strategy is not just about mercantilism (limiting imports and boosting exports), it’s about autarky: becoming self-sufficient. The Chinese government has proven that it seeks autarky in many traditional industries, such as steel and shipbuilding, and now wants it in emerging industries such as aerospace, computers, and semiconductors, placing itself counter to the fundamental tenet of comparative advantage that underlies liberalized trade in the global economy,” the Information Technology & Innovation Foundation writes in its comprehensive report titled “Stopping China’s Mercantilism.”

To achieve complete autarky and domination in all industries, China engages in a wide variety of non WTO-compliant strategies: the acquisition of foreign technology enterprises, the forced transfer from foreign companies working in China of technology or intellectual property (IP), the theft of IP through spying and cyberhacking, and the denial or restrictions of foreign firms’ access to Chinese markets, to name a few.

Taking all of this together, the World Economic Forum surmises in its 2016 Enabling Trade report that China “remains one of the world’s closed markets,” ranking it 101 out of 136 countries for domestic market access.

China is not about free trade. It has an official policy of exploiting trading partners for its advantage to achieve strategic autarky. There is no reason to support this strategy of an openly hostile regime, and Lighthizer understands this.

“We must find other ways to defend our companies, workers, farmers, and indeed, our economic system. We must find ways to ensure our market-based economy prevails,” he said.