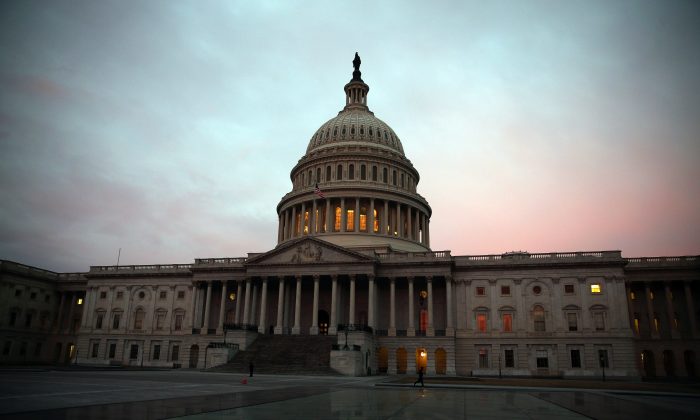 The morning sun begins to rise in front of the U.S. Capitol on March 11, 2014. (Mark Wilson/Getty Images)
Opinion

Why This Democrat Wants a Strong Republican Party

I’ve been a Democrat all my life. I believe in the party’s values, I’m pleased when its candidates win elections, and I’m persuaded the country is better off when Democratic ideas get a fair shake in the public arena. But none of this means that I favor a weak Republican Party. Indeed, just the opposite.

Before my Democratic friends drum me out of the party’s ranks, let me explain why.

The short answer is, our nation is stronger and our representative democracy healthier when we have two strong parties. A single political party that’s able to dominate public policymaking undermines the give-and-take that’s crucial to effective policy and leaves us weaker as a country.

No single perspective or ideology has all the answers.

Why is this? Let’s start with the big picture. If you think about the issues we confront—from the impact of climate change to the fight against terrorism to rebuilding an economy that serves poor and working families as well as it does the wealthy—it’s hard to argue that a single perspective or ideology really has all the answers. None of us, and neither political party, has a monopoly on wisdom.

Moreover, this country is huge and varied, and the legitimacy of the political system rests on its ability to give voice to the multitude of concerns and attitudes held by the American people. Some prefer the GOP’s approach, others the Democrats’, but it’s important they all have a political party to turn to. The more people feel that no one represents them or their views, the more alienated they become from the democratic process.

So the country benefits when two robust parties face off—in elections, in Congress, and in the 50 legislatures. When they can present their views, defend them, adjust them, and negotiate, compromise, and move forward, we’re being well served.

We need strong parties to generate solutions to the issues we confront that can get vetted in Congress, and be amended and reshaped to reflect the realities of a divided country.

If Trump wins the presidency, he’ll be the chief actor in determining the future of his party and what it stands for. If he loses, the GOP will more than likely move back toward its more traditional views as a party that embraces the free market, advocates for a muscular approach to national security, believes in American exceptionalism and our role in leading the world away from chaos, is filled with fiscal hawks who think that we have to curb entitlement programs, and pays attention to a business community that believes trade wars—especially with Mexico or China—would be catastrophic.

I suppose I’m showing my biases here, but I believe that a robust Republican Party will strengthen its willingness to improve and broaden the policy debate and move it away from steps to impede it. This would be a GOP that advocates for limited government, wants to reform our unwieldy tax code, and is determined to remain fiscally responsible so that deficits don’t explode.

I want to see Republicans tackle our health care system by reforming it using market mechanisms. I want Republicans to confront regulations that hamper the formation and growth of businesses, especially small businesses. And I want them to remain inclined toward devolving power away from Washington, giving states more control over such basic responsibilities as highways, welfare, and education.

Each of these issues has been at the center of the national agenda for many years, suggesting their difficulty. We need proposals from both sides that are realistic, coherent, and based on numbers that add up. We need parties that are at the top of their game, generating solutions to the issues we confront that can get vetted in Congress, and be amended and reshaped to reflect the realities of a divided country. And we need parties that are prepared to negotiate to move us beyond our current gridlock.

This can best happen when a healthy Republican Party is competing with a healthy Democratic Party. And at the moment, that’s not what we’re seeing.