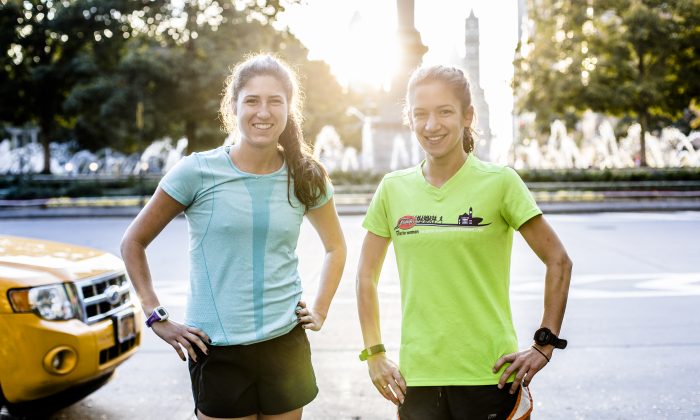 Why These Experienced Runners Compete in the NYC Marathon

NEW YORK—On Sunday, Cait Williamson will get up at 5:30 in the morning for a race that won’t start for more than four hours, otherwise she may never make it to the start line.

“The New York City Marathon is a unique one because all those streets shut down,” she said. “You have to get there before the roads close.” Road closures start on Central Park West as early as 6 a.m., although the first wave of general runners won’t leave Staten Island until 9:50 a.m.

Williamson, a 24-year-old doctoral student studying neuroscience at Columbia University, is running her second NYC Marathon. She is among more than 50,000 runners who will gather at the Verrazano-Narrows Bridge on Staten Island, where they will begin the 26.2-mile race.

After a painfully long wait in usually frigid morning weather, the starter’s pistol will fire. Mirthful music will play. But the runners know the most excruciating part of the race has yet to begin.

Getting to the Finish Line

Williamson will count up to 20 miles, then she will start to count down. She’ll check her GPS to make sure she’s pacing herself to meet her goal.

As she and the throngs of others run through the five boroughs, volunteers hand runners paper funnels of water.

To replenish their bodies, many runners carry tiny packets of food that come in gel form. The sports gel packets contain mostly carbohydrates and small amounts of sodium and sometimes caffeine; flavors vary from cranberry, to margarita, to bacon.

Runners have their special traditions that they follow every year for good luck.

Francesca DeLucia, a 26-year-old who is running the NYC Marathon for the third time, wears the same lucky blue socks each year. “They’re my marathon socks,” she said.

For many runners, their favorite spot on the course is also the most challenging one.

“The Queensboro mile is one of the most challenging, but also exquisite,” Elizabeth Maiuolo, who has a popular running blog RunningAndTheCity.com, commented via email. “Hold in your horses when you roll down the bridge, the crowds will push you to go even faster than you thought you could. The deafening crowds will overexcite you and you’ll be flying up First Avenue.”

The Queensboro Bridge is also Kettia Ming’s favorite part of the run. “While I love the spectators and support, this is one mile of pure silence,” said Ming, a 46-year-old who has finished the NYC Marathon three times. “All you hear is your breathing and the sound of footsteps.”

When the pain intensifies and Ming is tempted to stop, she mentally approaches the race one mile at a time.

This mentality, which has allowed her to go from a novice who finished her first marathon in almost six hours, to someone who is qualified to compete in the Boston Marathon, has trickled down to all aspects of her life.

“It colors how you deal with everyday challenges,” she said. “Things that people would normally be screaming or losing their minds over, I don’t. I know I can handle this.”

When the NYC Marathon first began in 1970, the race merely consisted of repeated loops around Central Park. Only 43 percent of its runners made it to the finish line. By 2014, 99 percent of the runners completed a race that stretched throughout the five boroughs, according to the NYC Marathon’s organizers New York Road Runners.

So much thought, training, and money have gone into the NYC Marathon over the years allowing the race to expand exponentially. The marathon brought the city $415 million in 2014, according to a study by consulting firm AECOM. This year, the race has sponsorship from large companies such as United Airlines, Japanese athletics company ASICS, and Airbnb.

New York Road Runners Inc., a nonprofit, earned $53.8 million in revenue in 2011. There was some controversy over the distribution of its earnings. According to the New York Post, it donated only $494,000 to charity, while its CEO at the time, Mary Wittenberg, earned a salary of $500,843. For reasons that may not be related to her salary, Wittenberg stepped down in March 2015.

Despite drawbacks such as extensive street closures and the earlier charity controversy, many still view the marathon in its purest light—as an icon of the transcendence of human limits. One would need to climb Mount Everest 4.7 times to cover the distance of the marathon (Mount Everest is 5.5 miles above sea level).

In recent years, many have begun to see the NYC Marathon as a chance to qualify for the much-hyped Boston Marathon, the most prestigious endurance race in the nation.

After 2013, when two bombs went off at the finish line in Boston killing three and wounding hundreds more, many runners have come to see competing in Boston as a chance to show one’s defiance against terrorism too.

As the runners in New York trudge on with the agonizing long trek, many will wonder if they will run fast enough to qualify for Boston.

“Boston is the highest goal you can hit,” Williamson said. “Many of us are thinking of Boston in the back of our minds.”

The Boston race is the oldest and most competitive marathon in the nation. “Boston is the holy grail for runners,” said Ming said. “You can’t just sign up because you paid the $205 fee. They make you earn it.”

Ming, the owner of a preschool, won’t be running the full NYC marathon this year because she wants to save her strength. She had been trying to qualify for Boston for six years, and unexpectedly made the mark two weeks ago at the Erie Marathon in Pennsylvania.

“Terrorists want us to have fear. They want to take away freedom with fear,” Ming said. “But the bombing made me more determined to run and qualify for Boston.”

But qualifying for Boston is a lofty goal. Terence Gerchberg, a 43-year-old who has run the NYC marathon 13 consecutive times, implores all runners to remember that the most important part of the race is to have fun.

Gerchberg is the executive director of nonprofit Back on My Feet, which uses running to help homeless people change their perception of themselves and move toward employment and independent living.

“Hopefully everyone has fun taking in the experience … the marathon is a little microcosm of life,” Gerchberg said. “You set out to do something and you accomplish it.”