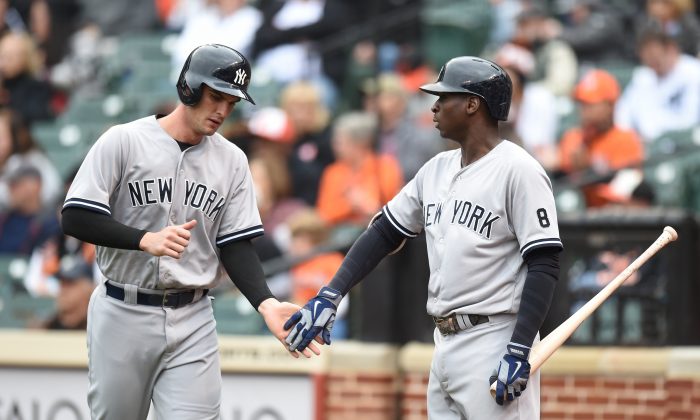 Didi Gregorius (R) and Greg Bird are two important Yankee players, yet they're not stars—something the Yankees are lacking. (Mitchell Layton/Getty Images)
Baseball

Why the Yankees Aren’t Expected to Win It All

After a two-year hiatus, the once-perennial contending New York Yankees are back in the postseason—even if it’s only the single-elimination wild card play-in game against Houston.

Of course, little is really expected of this team.

Why? We have no idea what to make of this team in transition. It’s remarkable that they got this far, but it’s far from the teams most Yankee fans remember in the playoffs.

The last time New York was on this stage—the 2012 ALCS against Detroit—things were much different.

The 27-time World Series champions still had the un-hittable Mariano Rivera in the bullpen. Derek Jeter was still in his prime—he led the league in hits as a 38-year-old—until a broken ankle suffered in Game 1 would end his season and severely limit the rest of his career. The always clutch Andy Pettitte was still there as the dependable big-game starter who won 19 career playoff games.

Meanwhile, A-Rod was caught getting the phone numbers of women in the stands.

Okay, not everything has changed.

But the core four players of the team that was built in the ’90s and ended up winning four titles in a five-year span—and five overall—carried high expectations with them every time out. Even when they were all in their late 30s and early 40s (Jorge Posada retired in 2011), there was a certain aura about them that made them the favorites.

It wasn’t just the massive payroll that the team generally had during that time (1995–2012) that raised expectations. Those players expected to win. And by and large, they did.

The current Yankees squad certainly has a couple of stars, but all of them are either past their prime or are limited by injury.

While A-Rod, Mark Teixeira, Brian McCann, and Carlos Beltran have paced the team in hitting, none of them are in their prime anymore—they’re just paid like it.

McCann achieved a career-best in home runs with 26, but he hit just .232. The 40-year-old A-Rod shocked us all with 33 home runs and a decent batting line of .250/.356/.486 (average/on-base/slugging), but he hit just .216 after the break. Beltran, now 38, was the team’s best hitter in the second half, but his lack of range in the outfield makes him a late-game substitution. Meanwhile Teixeira is back in his familiar place—the disabled list—after his best regular season since 2011.

Masahiro Tanaka may be the team’s biggest star still in his prime, but his consistent arm problems have limited his starts and his effectiveness.

The main positive of low expectations, though, is the no-pressure attitude that comes with them—something the Yankees rarely have. It should serve them well.