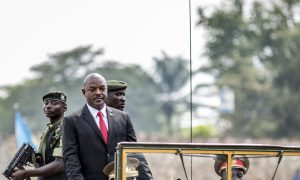 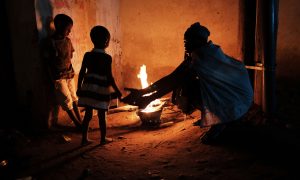 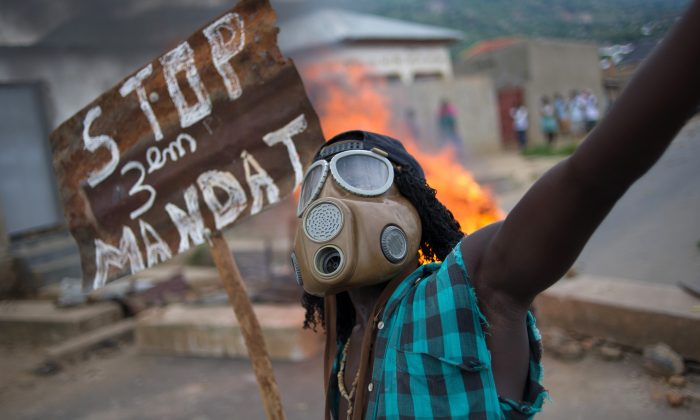 A Burundian protester wearing a gas mask holds a sign that reads 'Stop the third mandate' near a burning barricade in the Mugasa neighbourhood of Bujumbura on May 6, 2015. (Phil Moore/AFP/Getty Images)
Africa

The unfolding human tragedy in Burundi needs urgent intervention from the international community before it is too late. The seemingly hands-off attitude by the East African Community, African Union, and even the United Nations raises many questions.

The crisis has been characterized by sporadic violence, assassinations, intimidation, and the grouping of militias along ethnic lines. The situation is eerily reminiscent of the start of the 1993–2006 civil war in which an estimated 300,000 people died. The underlying issues of ethnic balance of power, corruption, and poor governance linked to that conflict appear to be re-emerging.

The underlying issues of ethnic balance of power, corruption, and poor governance linked to that conflict appear to be re-emerging.

The current crisis began in April with multiethnic protests by the opposition and civil society against President Pierre Nkurunziza’s decision to vie for a third term.

In Burundi, ethnic balance of power seems to be the major threat to stability. The two dominant ethnic groups, Hutu and Tutsi, have had altercations since the precolonial era.

Their squabbling became more serious in the aftermath of Burundi’s independence in 1962. The ethnic conflict culminated in the genocidal violence of 1993–2006 that killed more than 300,000 people.

The 1998 Arusha Peace and Reconciliation Agreement, specifically Article 7, made efforts to diminish the ethnic cleavage. But the tragedy of the peace effort was that it was anchored on power sharing among ethnic elites.

This was done without consideration for genuine justice and reconciliation across Burundi’s ethnic society. Nor with an eye on the establishment of strong governance institutions.

The ‘quick fix’ nature of the Arusha Peace and Reconciliation Agreement seems to have come back to haunt Burundi.

The “quick fix” nature of the Arusha Peace and Reconciliation Agreement seems to have come back to haunt Burundi. Ethnic protests threaten to tear the country apart, leading it to the path of a failed state.

There has been a mass exodus of Burundians to neighboring countries since the new violence. This has been driven by negative ethnicity—described as people fighting for their rights by destroying the rights of others—especially among the elites.

The U.N. refugee agency estimates that by November more than 200,000 people had fled Burundi in anticipation of ethnic conflict.

An outbreak of a full-scale civil war seems inevitable.

Bad governance and corruption by the Nkurunziza regime also threaten the survival of Burundi as a state. The ripple effects of these have seen a rise of poverty and unemployment, especially among the youth who constitute the majority of Burundi’s population of 11.2 million.

The large population of disenfranchised young people makes them vulnerable targets for recruitment into militias. This is evident in the high number who have aligned themselves with key actors across the political divide. The buildup of youth militia, leading to a highly militarized society, has created a tinderbox. All it requires is a spark to set off civil war that will consume Burundi’s state and national fabric.

Rising militarization, especially among youths allied to rival Hutu and Tutsi ethnic groups, is a clear indication of Burundi’s possible descent into the club of failed states.

The central government is weak and has little control over the country. It faces clear challenges in providing public services and is riddled with widespread corruption and criminality. Refugee numbers are climbing as more people flee their homes and the economy is in sharp decline.

Intimidation is on the rise and ethnic militia groups are retreating to their ethnic strongholds. Targeted assassinations across the political spectrum are increasing in the capital Bujumbura, akin to the initial stages of the 1993 civil war.

The most notorious case of militia hemmed along ethnic lines is the Hutu-dominated and pro-government militia, the Imbonerakaure. It has continuously waged a campaign of intimidation against Tutsis.

The militarization of ethnic groups indicates a clear pattern of a failing state incapable of using state institutions, such as the police and other security forces, to maintain law and order. The division of military along ethnic lines, which led to the aborted coup, is another symptom of gradual decline in the state’s capabilities.

There is no easy solution to the dangerous crisis in Burundi. The East African Community (EAC), which should be the obvious arbiter, doesn’t seem to be suited to resolve the crisis.

Kenya is busy with its own International Criminal Court cases and seems not to have time for the crisis. In Tanzania, President John Magufuli is new and needs time to establish his government.

For his part, President Paul Kagame of Rwanda has overtly declared that Nkurunziza’s regime is targeting minority Tutsi groups in Burundi. He has threatened to intervene if the crisis turns genocidal to protect Tutsis.

Ugandan President Yoweri Museveni—who is the current mediator—is facing a stiff competition from the opposition in elections slated for January 2016 and may have no time for Burundi.

Museveni, just like Nkurunziza, has been accused by the Ugandan opposition of manipulating the constitution to extend his stay in power. Hence, in the eyes of Burundi opposition, he lacks credibility to resolve a crisis sparked by his counterpart’s machinations to cling to power.

Any attempt to resolve the crisis and find a long-term solution must tackle political, constitutional, economic, and social problems in Burundi. For instance, the trigger issue in the recent conflict was the ambiguities in the interpretation of the Arusha Peace and Reconciliation Agreement and the country’s 2005 constitution.

Hence the Burundian peace process, while addressing the current political and constitutional crises, should also take into account the economic, ethnic, and social issues behind the conflict.

In the meantime, the U.N. should send a Chapter 7 peacekeeping mission to Burundi. Such missions apply to volatile “post-conflict settings where the State is unable to maintain security and public order.”

This would enable it to be given a mandate to use force to stop the killings by both the opposition and the government. After this, the African Union must lead in creating an inclusive political dispensation acceptable to all parties.

Patrick Muthengi Maluki is a lecturer at the Institute of Diplomacy and International Studies at the University of Nairobi in Kenya. This article was previously published on TheConversation.com