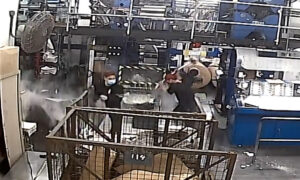 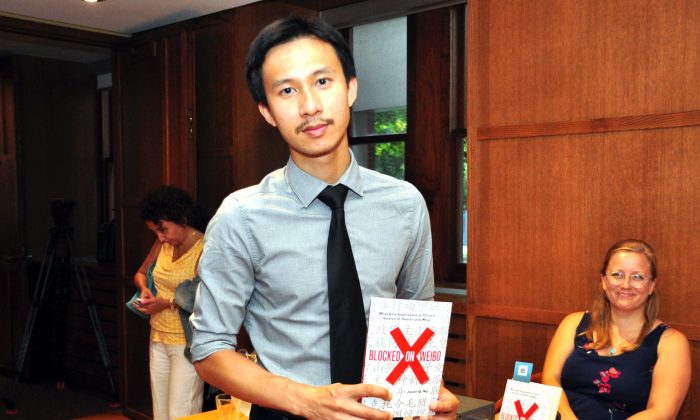 Jason Q. Ng, a Google Policy Fellow at the University of Toronto’s Citizen Lab, on Aug. 29 at the book launch for his new book "Blocked on Weibo." (Zhou Xing/Epoch Times)
China

Jason Q. Ng, a Google Policy Fellow at the University of Toronto’s Citizen Lab, introduced his new book “Blocked on Weibo” on Aug. 29. The book reveals a large number of keywords censored by Chinese authorities on the Chinese microblog service Weibo.

Since 2011, Ng has spent nearly two years studying blocked keywords. He told the Epoch Times that among the 1,500 blacklisted words, 500 are unique, 150 of which are listed in his book. He believes he can help readers understand how Chinese netizens use the Internet by using various approaches to collect data from Weibo.

Ng said it’s sometimes difficult to predict which words will be blocked or why they are blocked, but those critical of the authorities are usually chosen.

For example, “tank” is associated with the Tiananmen Massacre of 1989, and so it is not surprising it should be blocked. But once the phrase “rich woman” was blocked. “Rich woman” was associated with Guo Meimei, a young woman who flaunted wealth and claimed she was an officer with the Chinese Red Cross. This combination of words rapidly circulated on the Internet, then it was blocked.

Ng’s research shows that Chinese authorities included proper names, place names, and some unlikely phrases in its censorship. The name Jiang Yanyong was blocked because he disclosed the fact that the Communist Party was concealing the SARS epidemic in 2003. Kashi, a place in Xinjiang where riots and conflicts often occur, is also blocked.

Since 1999, the Chinese authorities have brutally persecuted practitioners of Falun Dafa (also known as Falun Gong). The Communist Party has used the entire mainland Chinese media network to paint an image of Falun Dafa as mad and evil, while censoring Falun Dafa books and any materials that give an accurate description of Falun Dafa. Because the phrase “Canadian French” contains the two characters “Da Fa,” it has been deemed worthy of censorship.

Coincidentally, Ng’s study also found that “Renmin University of China Law School,” a Communist Party institution, also contains the characters “Da Fa,” so it was censored for the same reason that Canadian French was censored.

Ng notes that Western countries meet their citizens’ needs with fewer restrictions on the free flow of information, but China maintains strict control.

“I believe that Chinese citizens want more freedom of speech, but they still have no chance to participate in the discussion on network control.” Ng said.

Ng was very interested in how much the Communist Party invested in network control. He said that there must be at least 100,000 people censoring words on Weibo, because some blocking occurs within seconds after the nearly 600 million Weibo users have circulated the word(s).

Even the title of Ng’s book was deleted within a few minutes of being posted by a Weibo user. Ng said that even if the posted text were converted into a picture, it would still be censored.