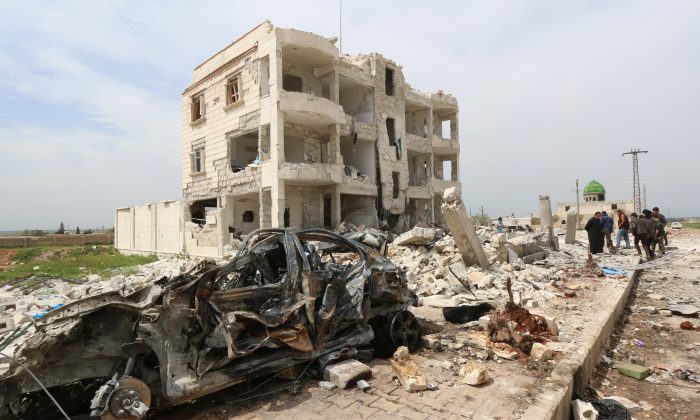 Syrians walk through the rubble following an alleged bombing by the Islamic State in Marea, northern Aleppo, on April 8, 2015. (Zein al-Rifai/AFP/Getty Images)
Opinion

Once again, this year’s Session of the General Assembly saw a renewed discussion of what role the U.N. plays in the world—and once again, these discussions have revolved around the U.N.’s inaction in Syria and its inability to deal with the so-called Islamic State (ISIS).

There seems to be an international groundswell of support for addressing the grave atrocities that ISIS has committed, but specific proposals are thin on the ground. So far, all the U.N. looks likely to do is to gather evidence of atrocities the group’s fighters have committed.

This may not sound like much, but it may be a better option than it first appears—and not just because it’s the only one that might actually happen.

The U.N. cannot intervene in Syria without Security Council authorization. There are 15 countries on the council, but its five permanent members—China, France, Russia, the U.K., and the United States—each have the power to veto any resolution unilaterally. Russia will veto any action against the Assad regime, which it is backing with considerable airpower; the U.S. will veto any action against most Syrian rebel groups.

But what about ISIS? The group has no backers among the U.N.’s member states, let alone among the Security Council’s permanent five. Even if different countries’ approaches to the problem haven’t always been aligned, there is a consensus that IS should be eradicated. So why isn’t the U.N. doing something about it?

As things stand, the U.N. cannot take direct action against ISIS because ISIS is not a state. Despite its claims to the contrary, it remains a non-state actor that has implanted itself in other countries’ sovereign territory.

There are clear and widely recognized criteria for statehood: a permanent population; defined territory; a government; and capacity to enter into relations with other states. But in addition, a state is only a state when other countries recognize it as such, and deal with it in the same way they deal with other countries.

The really crucial criterion here is recognition by other states. Even if ISIS did somehow fulfill the criteria of a state, countries across the world will never recognize it as one, because if they did, they would have to treat it as they do other states.

As such, any U.N. action against ISIS and its fighters would require either the consent of the country in which it is operating or Security Council approval to intervene in a sovereign state. Since Syria will not consent to U.N. intervention and Russia will veto any Security Council resolution to allow intervention there, that is not an option.

There are a fair few methods for such prosecutions to take place, but the big question is whether any of them apply to IS leaders.

As a first option, these cases can be prosecuted in any national court under the principle of universal criminal jurisdiction. In a nutshell, this principle holds that some crimes are so severe that any national court can prosecute them even if the culprit is a foreign national who didn’t commit them in that country’s territory.

To do this, however, the person must be in the country that wishes to prosecute them. When the Mossad kidnapped the Nazi Adolf Eichmann in Argentina so he could be prosecuted in Israel, it was not legally justified to do so under universal jurisdiction. It’s hard to imagine IS leaders returning openly to countries that want to prosecute them.

Another option sometimes mentioned is the International Criminal Court (ICC), but the court could only claim jurisdiction over IS members if they commit international crimes. Even then, any individual defendant would have to be a national of a country that is party to the ICC, or would have to travel through the territory of a country that is a member—and the ICC only has two members in the Middle East, namely Jordan and Palestine.

The Security Council can also refer a situation to the ICC, but it can only refer a “geographic situation” and not a specific non-state actor. If it referred a region where IS has committed international crimes, other actors in that area could also fall under the court’s jurisdiction.

Various Syrian rebels, the Kurds, the Assad regime, and others have all committed international crimes in Syria—and since both Russia and the US have picked sides in the war, at least one of them would surely veto any resolution that exposed their erstwhile allies to prosecution.

Similarly, an specially established internationalized criminal court or tribunal would again have to have jurisdiction over actors that powerful countries want to protect, and could only be set up by a Security Council resolution. The same problem of vested interests would apply.

That leaves us where we began, with the U.N.’s evidence-gathering proposal. It may sound like a sorry substitute for justice, but it’s a lot better than nothing.

It upholds victims’ rights to truth and transparency. As with the enforced disappearances and purges in Latin America decades ago or atrocities in apartheid-era South Africa, the right to know what happened is a crucial part of the healing process. In that respect, evidence-gathering is an end in itself.

There’s also an imperative to make sure crimes do not go unacknowledged. Commissions of inquiry and fact-finding missions, already used in places from North Korea to Darfur to Gaza, allow the U.N. to raise international awareness. Human rights abuses and international crimes must be scrutinized if other states and non-state actors are to be deterred from committing similar atrocities.

Silence and inaction foster impunity, and when people believe that they are operating behind a cloak of impunity, they are far more likely to commit crimes. If you don’t believe that, think about how many people illegally download or stream music, films and TV shows, and then think how few people steal those items from shops.

And if nothing else, evidence gathered may yet be useful for future prosecutions if they can somehow be brought about. The U.N. can’t do everything that we would hope about ISIS—but at least it’s trying.

Rosa Freedman is a professor of law, conflict, and global development at the University of Reading in the U.K. This article was originally published on The Conversation.