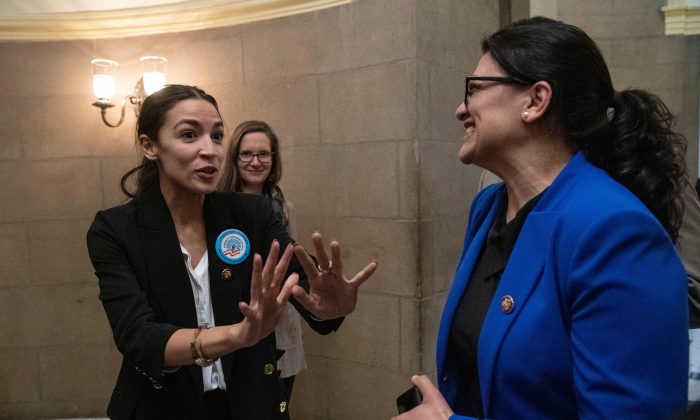 Why the Socialist Surge Now? Part I

The coming-out party for Rep. Alexandria Ocasio-Cortez’s (D-N.Y.) Green New Deal in February acted as a catalyst for fellow travelers across the country, igniting their passions for her audacious program to remove excess carbon, and perhaps President Donald Trump, from the face of the earth—not necessarily in that order.

Regardless of Ocasio-Cortez’s recent ethics challenges, reliable sycophants continue to heap praise onto her as the new face of the Democratic Party, triggering scowls of skepticism from the decidedly older face of House Speaker Nancy Pelosi (D-Calif.).

Who can blame her? She’s been facing a situation similar to the one explained in 1937 by George Orwell in “The Road to Wigan Pier.” In it, he wrote about the effects of flinging the word “socialism” into the public sphere: It calls up “a picture of vegetarians with wilting beards, of Bolshevik commissars (half gangster, half gramophone), of earnest ladies in sandals, shock-headed Marxists chewing polysyllables, escaped Quakers, birth-control fanatics, and Labour Party backstairs-crawlers.”

In other words, a menagerie of ne’er do-wells, oddballs, and cranks. For “Labour Party backstairs-crawlers,” substitute the Green New Deal’s 90 co-sponsors, who clawed their way from richly deserved obscurity to wrap their reputations around a proposal that would cleanse the country of unwanted carbon and constitutional government in one fell swoop. Doesn’t get any better than that.

The question is: Why has socialism become all the rage today, with a looming presidential election that is already spiking fevered political anticipations to solar levels?

A small library of columns and essays has sprouted during the past several months asking the same question.  Lee Edwards from The Heritage Foundation soberly explains the threat in his Dec. 3, 2018, article “What Americans Must Know About Socialism.” Emily Ekins and Joy Pullman of The Federalist cover copious ground in their article “Why So Many Millennials Are Socialists?”, coming up with familiar answers supported by terrifying statistics and tables.

These, and scores of other analyses, always begin with the usual suspects—especially education, or the lack thereof. This remains a useful, if familiar, place to start—although, in our case, with a twist here and there.

The Role of Ignorance

If it made any sense to talk about ignorance having depth, then the concept of a bottomless pit aptly describes how little the past two generations of students learned about history, politics, and the philosophical foundations of their own country.

Instead of assaulting our eyes and sensibilities with a blizzard of depressing charts, tables, and percentages—which are easily accessible elsewhere—I shall try to depict the academically induced illiteracy of college attendees when they are asked about one of the most serious subjects of the past two centuries.

For instance, when Campus Reform dispatched interviewers to query students on campus about socialism, their subjects typically spluttered the following words:

“I guess just, you know, getting rid of that wealth gap in the United States?”

“I think people throw that word around to try and scare you, but if helping people is socialism, then I’m for it.”

“It’s more of an open form of government and it feels a lot more accessible to a lot more people.”

However, when asked further to define socialism, most said something like, “To be quite honest, I don’t know.” In fact, to the extent any knowledge about socialism is claimed, it’s often equated with getting more free stuff—free health care, free transportation (without fossil fuels), guaranteed jobs, a life of abundance, and perhaps most of all, free college.

As far as where all that free stuff would come from, students are as clueless as the Eloi encountered by the time traveler in H. G. Wells’ “The Time Machine.” Consider the main character’s assessment of the people he encountered:

“The several big palaces I had explored were mere living places, great dining-halls and sleeping apartments. I could find no machinery, no appliances of any kind. Yet these people were clothed in pleasant fabrics that must at times need renewal, and their sandals, though undecorated, were fairly complex specimens of metalwork. Somehow such things must be made. And the little people displayed no vestige of a creative tendency. There were no shops, no workshops, no sign of importations among them. They spent all their time in playing gently, in bathing in the river, in making love in a half-playful fashion, in eating fruit and sleeping. I could not see how things were kept going.”

He later discovered that all that stuff was made by Morlocks, the producers in the future where he had landed. Nowadays, we likely would call Eloi socialists, which one may suppose equates Morlocks with capitalists. They’ve been called worse.

The Wells quote is included to depict a scenario too common today. Consider a tenured professor at a large state university with a $7 billion budget, prominent sports teams, and buildings filled with the latest modern technology. He or she walks along lanes of a gorgeous campus hosting architecturally dazzling structures, which were constructed by entrepreneurs who have thrived in a country built by free enterprise and free minds, both of which represent the fruits of two-and-a-half millennia of philosophic genius.

Nonetheless, the professor teaches courses that excoriate the United States, and leave students contemptuous of their origins and incapable of critically assessing ideas that float in their direction, regardless of how insane or destructive they might be. Young people enter as eager learners and graduate as moral and intellectual ciphers with whatever occupational specialties that engaged their efforts along the way.

Neither teachers nor students devote any thought to the source of their sumptuous surroundings. Like the Eloi, they neither care nor are curious; they revel in their protected environment and assume it will continue forever.

The result is hordes of people like Ocasio-Cortez and Sarah Jeong, the latter an anti-white racist hireling of The New York Times, brilliantly characterized by Heather Mac Donald as a “boring, typical product of the American Academy”—much like Ocasio-Cortez.

This, of course, is the problem, one that commenced with leftism’s “long march through the institutions,” beginning in the sixties and completed a scant two decades later. Indeed, by 1987, Allan Bloom, in “The Closing of the American Mind,” lamented the dismal state of the humanities in academia:

“The humanities are like the great old Paris Flea Market where, amidst masses of junk, people with a good eye found castaway treasures that made them rich. Or they are like a refugee camp where all the geniuses driven out of their jobs and countries by unfriendly regimes are idling, either unemployed or performing menial tasks.”

Interestingly, Bloom was surprised by the notoriety his book received; it generated angry, self-righteous attacks from battalions of humanities professors, perhaps especially indignant about the book’s subtitle: “How Higher Education Has Failed Democracy and Impoverished the Souls of Today’s Students.”

A few years later, Roger Kimball wrote that “Gender Studies, Ethnic Studies, Afro-American Studies, Women’s Studies, Gay, Lesbian, and Transgender Studies” were “not the names of academic disciplines but political grievances.” In the meantime, “the traditional curriculum and modes of intellectual inquiry [were] excoriated as sexist, racist, or just plain reactionary.”

Note that he made the latter observation in 1990, no less, in a book titled, “Tenured Radicals: How Politics Has Corrupted Our Higher Education.” No wonder that nearly 30 years later, offspring of these tenured radicals have embraced the next step in their intellectual descent and war against the United States—socialism.

This war also consists of filling curricula with courses about nothing, such as anthropogenic climate change, global citizenship, microaggressions, and masculinity—all of which magically “poof” into existence if you believe they exist. With gullibility levels in the stratosphere and no competing sources, students imbibe this concoction and finish their educational experience with heads filled with fluff.

How can it be otherwise? Grappling with great questions addressed by brilliant minds has a sobering, maturing effect on one’s intellect, enabling serious inquirers to ascertain truth from falsehood, sound arguments from sophistry, and legitimate bodies of knowledge from ideological huckstering.

Instead, too often they receive sermons about class, race, and gender, tucked into discussions about how Marx characterized his socialism as “scientific”—much like climate change fanatics today claim about their weird cult, and socialist sympathizers claim about their dalliance with evil.

In summary, misty-eyed plucking of heartstrings about the most destructive ideology of the past two centuries in an intellectual vacuum of mind-numbing ignorance explains, in part, the current surge of socialist sympathies.

Unfortunately, much more is involved. In fact, additional factors that account for socialism’s rising appeal may be even more dangerous than academically induced historical illiteracy. These we will consider in our next installment.