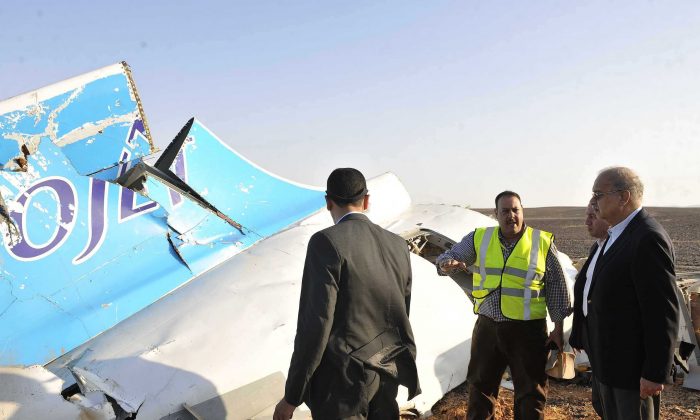 Egypt's Prime Minister Sherif Ismail (R) at the site of the wreckage of the crashed A321 Russian airliner in Wadi al-Zolomat in Hassana Province, a mountainous area of Egypt's Sinai Peninsula, on Oct. 31, 2015. A Russian aircraft carrying 224 people crashed Saturday in the region about 20 minutes after taking off from a Red Sea resort Sharm el-Sheikh in south Sinai bound for Saint Petersburg. There were no survivors. (Suliman al-Oteify/AFP/Getty Images)
Opinion

While the cause of the Russian airliner crash in Egypt remains unknown, the incident has re-focused the world’s attention on the Sinai Peninsula—site of a number of popular tourist resorts, and host to a long-running security crisis with regional and international implications that cannot be ignored.

Unrest in the Sinai is nothing new. During the political and civil unrest that followed Egypt’s revolution in 2011, the Sinai Peninsula became a base for militant activity. Armed groups took advantage of the security vacuum there, using weapons smuggled from Libya to begin enforcing their jihadist ideology. Insurgent activity further intensified in 2013 after a military coup ousted President Mohamed Morsi and the subsequent crackdown on Islamists by the current Egyptian President Abdel Fattah al-Sisi.

Even though the Sinai crisis has been underway for years, the rest of the world has only really begun to pay attention in the last year or so.

But even though the Sinai crisis has been underway for years, the rest of the world has only really begun to pay attention in the last year or so.

In November 2014, the Sinai-based jihadist group Ansar Beit al-Maqdis (ABM) (since renamed Sinai Province) pledged its allegiance to Islamic State (ISIS). Since then, both the frequency and sophistication of attacks, most against Egyptian military and police targets, have increased, with hundreds killed in over 700 attacks in the first half of 2015 alone.

Then, on July 1, near simultaneous attacks were launched on over a dozen military and police targets near Sheikh Zuweid in the northern Sinai, resulting in unprecedented clashes that left more than 100 dead.

The situation has only been compounded by Egypt’s failing short-term counter-terrorism measures, combined with problematic economic policies and political oppression. In the short term, Sisi’s harsh crackdown on all Islamists, not just jihadists, has only spurred more radicals to take up arms against the state. Likewise, the decision to outlaw the Muslim Brotherhood opened a space for more extremist groups such as Sinai Province.

In the Sinai especially, political grievances are combined with social and economic disparities, with development in the northern part of the peninsula essentially neglected even as the popular tourist resorts in the south—most of all Sharm al-Sheikh—rode a wave of state investment and tourist dollars.

The economy that radical groups depend on has also been dramatically squeezed since the Egyptian government cracked down on the smuggling tunnels between the Sinai and Gaza. (While Hamas in Gaza denies any direct association with Sinai Province, and has in fact been at odds with ISIS, both groups relied on the flow of goods through the tunnels and benefited from the smuggling economy.)

Now, local leaders are finding it harder to maintain legitimacy and assert authority, and are losing more of their influence to groups providing direct economic or political incentives.

Meanwhile, Egypt’s military has been unable to gain any tactical advantage in the mountainous desert landscape, which the insurgents are very able to use to their advantage.

Stability in the Sinai is obviously a key priority for Egypt. The whole premise of Sisi’s rule is his promise to stop terrorists and ensure stability. But ever since he came to power, Egypt has suffered numerous attacks not only in the Sinai, but also in Cairo and in an attempted attack in Luxor. These incidents have further damaged Egypt’s already struggling tourism industry, with revenues from ancient sites down 95 percent since 2011.

Instability in Egypt in general and the Sinai in particular is also a major concern for Israel.

The two states’ counter-terrorism and intelligence co-operation is reportedly strong, with Israel continuing to assist Egypt’s Sinai campaign and approve its deployments there, essentially overlooking the demilitarization mandates from the 1979 Camp David Accords. But the relationship is risky for both states; collaboration with Israel is unpopular in Egypt and easily can be turned into propaganda by extremist groups, while Israel has to deal with an unstable border while it waits for Egyptian forces to stabilize the peninsula.

Israel aside, the Sinai is also key to broader regional stability. Strategically located on the edge of the Levant, the Gulf, and North Africa, its position would make it the ideal bypass area for militant groups and arms smuggling—a threat to the stability of the entire Middle East.

There is no quick-fix to the situation, which is precisely why the Egyptian government’s whack-a-mole response to insurgent activity has been ineffective. Groups such as Sinai Province are taking advantage of long-term political and economic grievances exacerbated by the Sisi government to gain leverage, and mass arrests, death sentences, and military operations by the Egyptian state against all Islamists are only fuelling jihadists’ efforts.

Of course, most inhabitants of the Sinai do not actively support Sinai Province or any other jihadist group; Sinai Province itself is only estimated to have between 1,000 and 1,500 active members. But in the absence of secure local leadership or economic development, it’s not difficult for such groups to gain a foothold.

Egypt urgently needs to stop focusing on short-term military crackdowns and instead come up with proper long-term social, political, and economic strategies. If it doesn’t, an already festering situation could become one of the Middle East’s biggest liabilities.

Julie M. Norman is a research fellow in conflict transformation and social justice at the Queen’s University Belfast, U.K. This article was previously published on TheConversation.com