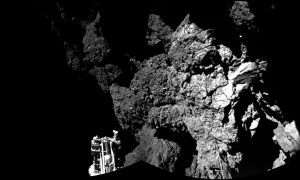 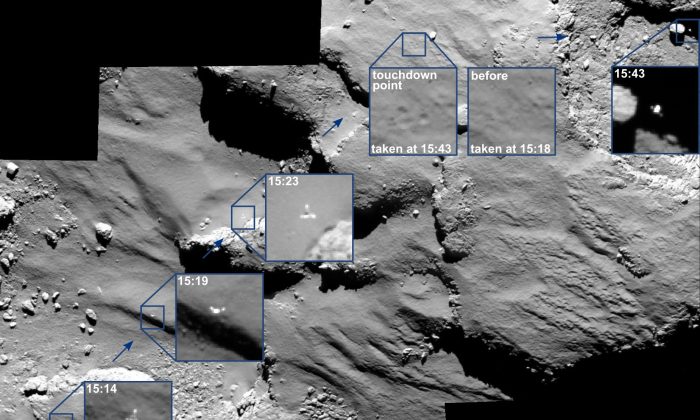 Robot on a comet, that’s all. (ESA/Rosetta/MPS)
Science

Why the Rosetta Mission Is This Generation’s Moon Landing

The thing everyone seems to talk about with the moon landings is the idea of the whole world stopping to watch. It was a mission that overcame nationalism, it wasn’t “America” putting a man on the moon, it was “Us” – humankind. With Rosetta, the whole world not only watched but they were part of a real-time conversation with mission control.

Over the next few months as scientists analyse the data sent back by Philae and Rosetta it might tell us many new things about our early solar system. The detailed pictures of the comet are our first look at this strange world. The data and pictures definitely have a place in inspiring people to become more interested in science, but there will always be something incredible about humans beings, or robots that humans have engineered, going out into space and actually touching down on worlds beyond our Earth.

I didn’t witness the moon landings, but despite that there has always been something about the subject of space that has totally entranced me. I am sure they have inspired many young and old to take an interest in science. In fact, I was so inspired during my primary education that when my teacher informed the class that for the last week of term we could do our own project, which could be on any subject, I chose, what I assumed to be, the most exciting and obvious choice: a project on space.

I remember researching as much as I could find in all the books my school library had to offer on the subject and then writing out my discoveries about the planets, the moon and astronauts onto multi-coloured A4 pages with a pencil, in my neatest handwriting and sticking them together to make a book. I even remember doing an elaborate drawing of an astronaut, which included a cutaway into his astronaut suit so you could see all the tubes inside the suit that helped him breathe and go to the toilet. My project workbook was one of the thickest in the class.

I really think the buzz surrounding the Rosetta mission will generate this kind of excitement and I think it has actually provided us with a greater awareness of possible science careers. Now, after watching interviews with many of the scientists, engineers and control-room operatives, it is not just the astronauts or the landers that are the stars of the show.

The Rosetta mission gave the public an insight into something that was happening right now. They could feel the emotions of every minute and track the spacecraft in real time from wherever they were. They could put themselves in the place of the scientists in the control room, who were nervously waiting for news from Philae. They even had up-to-date information on what little Philae was “feeling” as he descended to the comet surface.

They could see that scientists and engineers all just looked like normal people, they weren’t superhero-genius types with crazy hair. They even made mistakes. The public became part of this enormous community and through social media they could talk with people all over the world about the next stage in the mission and the science that would come out of it.

To quote my mother: “They landed on the moon, and that’s big! But a comet, well, that’s mind blowing! That’s just a bit of rock flying through space!”

Sadie Jones does not work for, consult to, own shares in or receive funding from any company or organisation that would benefit from this article, and has no relevant affiliations. This article was originally published on The Conversation. Read the original article.