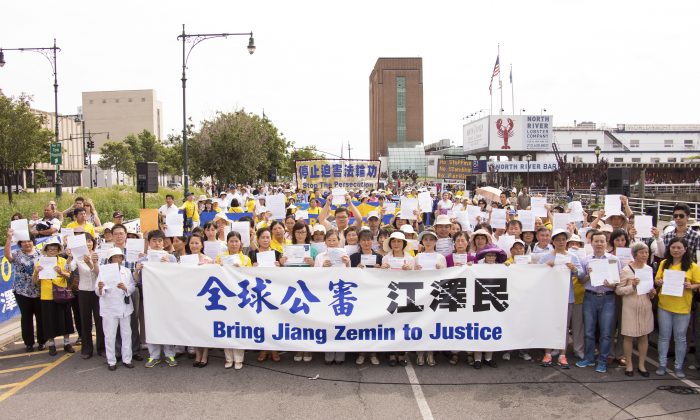 Falun Gong practitioners hold their criminal complaints at a rally in front of the Chinese consulate in New York City on July 3, 2015, to support the global effort to sue Jiang Zemin. (Larry Dye/Epoch Times)
China

For Chinese communist functionaries around China, it’s a dilemma: Ordinary citizens are attempting to use the legal system to bring to justice a former leader who started an illegal persecution 16 years ago. Though what they’re doing is perfectly legal, the case they seek justice for—the persecution of the Falun Gong spiritual practice—touches on a deep political taboo.

The violent political campaign against Falun Gong, a popular practice of meditation and moral teaching, was launched by former Party leader Jiang Zemin in 1999, the man whom criminal complaints are now being lodged against.

And Jiang Zemin, who created a vast political network to protect his interests over the years, also happens to be the chief political opponent of current Party leader Xi Jinping.

The result is that no political line on how to respond to these complaints has been promulgated to the rank and file, and officials around China encountering the petitioners often fill in the blanks themselves.

Thus, how the complainants are treated varies widely.

A Tale of Two Treatments

This became apparent on June 28, at a post office in an unnamed part of China, according to a report published on Minghui, a Falun Gong website that documents the persecution.

According to the report, three practitioners in an unspecified part of China went to a post office to mail their suits to the Supreme People’s Procuratorate and the Supreme People’s Court. As a police officer stood nearby in the lobby, an astonished clerk initially refused to accept their cases.

“You Falun Gong practitioners are really brave—and you dare to send lawsuits like this?!” the clerk asked. “Are you saying that the suppression will be over soon?”

After some discussion, a manager was called to clarify the situation. Unsure of any policy, he called multiple superiors about how to deal with the submissions. Eventually, one of them gave him a clear response: “Proceed!”

But in Tianjin, the result was the opposite.

On June 25, at least 10 practitioners of Falun Gong in the northern city of Tianjin were detained and their homes were ransacked after they filed lawsuits against Jiang, Minghui reported. Police also ordered post offices, where the lawsuits were submitted, to withhold the cases.

One of the practitioners, Ms. Li Chunxia, was dragged from her home in the morning by officers of the Tianjin Public Security Bureau, who removed her to the Qiaobei District police station where she was chained to a chair and interrogated. Family members shot a video as the officers went through their home and also managed to obtain footage of Li’s interrogation.

Another woman, Dong Chaofeng, was detained later that day. Her belongings, including a computer and Falun Gong materials, were confiscated. Dong’s neighbor, Ms. Tang Li, another practitioner, was also detained and her phone, cash, and books confiscated. The police reportedly became enraged upon finding a copy of the lawsuit submission in her home.

According to Li Tianxiao, a senior political commentator for New York-based New Tang Dynasty Television, the lack of central direction from the Communist Party on how to handle the mountain of complaints—from a persecuted group, no less—likely signals the regime’s wish to discreetly shift its policy regarding Falun Gong.

“The persecution of Falun Gong is one of Jiang Zemin’s most significant political acts,” Li said in an interview with the Epoch Times. In recent years, Jiang Zemin, who left his post as Communist Party general secretary in 2002, has seen his network of allies in the Communist Party fall into disgrace during the ongoing anti-corruption campaign initiated in 2013 by current general secretary Xi Jinping.

One sign that Xi doesn’t share Jiang’s enthusiasm for crushing peaceful meditators lies in his treatment of the 610 Office, a Communist Party agency that Jiang Zemin created on June 10, 1999, to direct the persecution of Falun Gong.

In 2013, for instance, Li Dongsheng, a Jiang stalwart and former head of the 610 Office, was investigated for corruption and expelled from the Communist Party. Earlier this year, Liu Jinguo, who replaced Li, resigned from his post and left no successor.

As Jiang’s allies fall one after another, even the once-omnipotent 610 Office, which wielded extralegal authority over police and Party organizations at all levels of society, may be nearing its end.

The lawsuits against Jiang Zemin, starting this May, have been filed by tens of thousands of Chinese citizens, from schoolteachers to military veterans, from airline pilots to electrical engineers.

The wave was made possible by Chinese legislation which, having come into effect on May 1, relaxed the requirements for filing legal complaints. According to the most recent reporting by Minghui, more than 34,000 lawsuits have been successfully submitted as of July 2 to the Chinese judiciary.