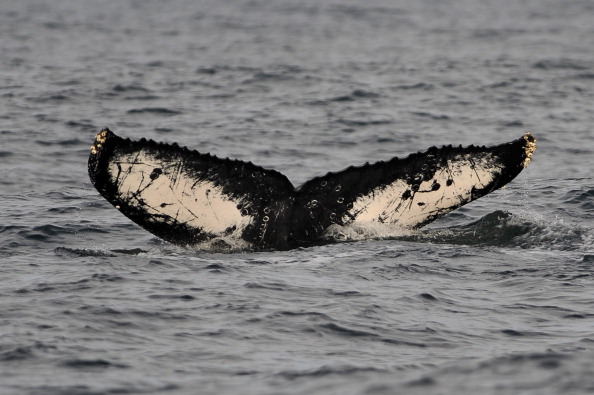 The tail of a humpback whale emerges from the surface of the Pacific Ocean at the Uramba Bahia Malaga natural park in Colombia, on July 22, 2011. (Luis Robayo/AFP/Getty Images)
News

Why the Ocean Ecosystem needs Whales

All species big and small have a role to play in the natural world defining the habitat and the ecosystem they live in. Now scientists have found the important tasks whales have been given to maintain the health of the oceans. A recent study shows that these giant mammals have an influence on global carbon storage, the health of commercial fisheries and are important part of the ocean ecosystem living and even after death.

“For a long time, whales have been considered too rare to make much of a difference in the oceans,” said University of Vermont conservation biologist Joe Roman.

In order to understand the ecological significance of whales better, Roman and a team of biologists compared the statistics from decades of research on whales around the globe and came to the conclusion that whales matter a lot to the well-being of the oceanic ecosystem.

The decline in great whale numbers, estimated to be at least 66% and perhaps as high as 90%, has likely altered the structure and function of the oceans,” Roman and his colleagues write in the July 3, 2014, online edition of Frontiers in Ecology and the Environment, “but recovery is possible and in many cases is already underway.”

Baleen and sperm whales, known collectively as the “great whales,” include the largest animals to have ever lived on Earth.

Here are some important roles they play in the ocean,

Food Chain – Because of their high food intake, whales eat a large number of fishes and vertebrates in the ocean. They are themselves prey to other predators like killer whales, and distribute nutrients through the water. This makes them an important part of the food chain.

“As humpbacks, gray whales, sperm whales and other cetaceans recover from centuries of overhunting, we are beginning to see that they also play an important role in the ocean,” Roman said. “Among their many ecological roles, whales recycle nutrients and enhance primary productivity in areas where they feed.”

Whale Fall – Even their carcasses, dropping to the seafloor, provide habitat for many species that only exist on these “whale falls.” In fact, the researchers fear there are many invertebrates that became extinct when whales were hunted to death decades ago and their number had suddenly plummeted leaving no ‘homes’ for the invertebrates.

Whale Pump – Whales catch their prey at ocean depths and release the faecal plumes in the surface. This supports plankton growth and the whole process is called whale pump.

The researchers say that traditionally commercial fishermen sea whales as a competitor in the waters, but their study explains that the opposite is true. By their presence, whales increase the entire population of a gamut of ocean dwelling species.

“As long-lived species, they enhance the predictability and stability of marine ecosystems,” Roman said.

Despite their important function, large size and significance in mythology whales have suffered in the hands of humans. Seven out of the thirteen great whale species are classified as endangered or vulnerable, even after decades of protection.

Ocean ecosystems are threatened by increasing temperatures and acidification. Other factors such as collision with ships, entanglement in fishing nets cause damage to whales. Whales are rendered deaf by the noise from shipping activity. Oil rigs affect their feeding and breeding grounds and cause changes in their migratory path.

The study authors believe, new observations of whales will provide a more accurate understanding of historical population dynamics and “are likely to provide evidence of undervalued whale ecosystem services,”

“This area of research will improve estimates of the benefits — some of which, no doubt, remain to be discovered — of an ocean repopulated by the great whales.”

Whales roam through all of the world’s oceans and communicate with complex and mysterious sounds. The blue whale can reach lengths of more than 100 feet and weigh up to 200 tons—as much as 33 elephants.  Despite living in the water, whales breathe air. And like humans, they are warm-blooded mammals who nurse their young. A thick layer of fat called blubber insulates them from cold ocean waters.

Some whales are known as baleen whales including blue whale, right whale, bowhead whale, sei whale and gray whale. They get the name because of the special bristle-like structures in their mouths (called baleen) that strains food from the water. Other whales, such as beluga or sperm whales, have teeth.

This article was originally written by Ramya Naresh, a contributing writer for indiasendangered.com. For more information and the original story, please click HERE.