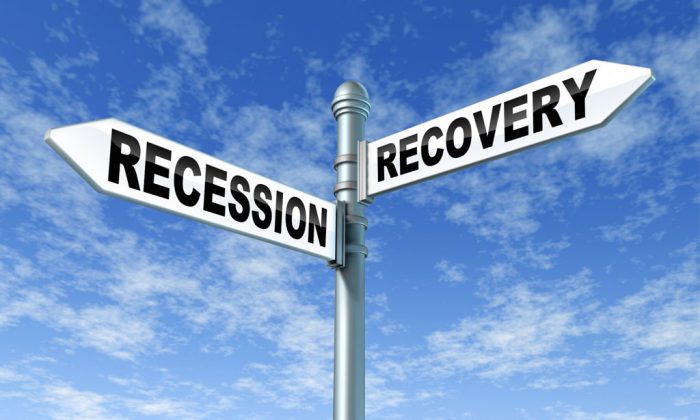 Why the Mainstream Fails to Understand Recessions

In a 2010 Bloomberg Television interview, Alan Greenspan said, “The general notion the Fed was propagator of the bubble by monetary policy does not hold up to the evidence. … Everybody missed it — academia, the Federal Reserve, all regulators.”

Everybody missed it? Not according to Axel Leijonhufvud. In 2008 he wrote, “Operating an interest-targeting regime keying on the CPI, the Fed was lured into keeping interest rates far too low far too long. The result was inflation of asset prices combined with a general deterioration of credit … a variation on the Austrian overinvestment theme.” Randall Forsyth concurred, writing the following in early 2009, “The Austrians were the ones who could see the seeds of collapse in the successive credit booms, aided and abetted by Fed policies.”

The Failure of the Mainstream

Despite the unprecedented fiscal and monetary action taken by the Bush and Obama administrations, which pushed the per capita budget deficit to more than twice the previous record, and the Fed, which quadrupled its balance sheet, the economy continues to be stuck in a deep recessionary gap. Instead of acknowledging the failure of these actions, policy makers have doubled down. As the Fed continues to print money to buy securities directly from Treasury and hold rates near zero, asset bubbles are reflating, excess reserves have exploded, and bad economic news pushes stock markets ever higher. With the pedal pushed to the metal, economists surveyed by the National Association for Business Economics in 2012 said they wanted current fiscal or monetary policy to continue. A year later, economists in that same survey said monetary policy was about right.

In a 2013 New York Times article, Paul Krugman acknowledged that the housing bubble he prescribed for the 2001 recession had resulted “in the greatest economic crisis since the 1930s,” but called for the Fed to ignore the “babbling barons of bubbleism, and get on with doing [its] job” of fighting high unemployment.

Money printing and low interest rates are part of a much broader problem. The system the Fed oversees is wracked with moral hazard. The FDIC, the Fed being the lender of last resort, the too-big-to-fail doctrine, and mortgage securitization by Fannie and Freddie allow lenders to make riskier loans than they would have otherwise made. Unlike large national banks, credit unions are hesitant to make 30-year fixed rate mortgages. Why? They understand that their net interest margin will be negative if future deposit rates rise above fixed rates on mortgages made years earlier. They also understand that they are too small to be bailed out.

The aforementioned backstops are necessary because fractional reserve banking is inherently unstable. The money that is lent into existence can vanish at a moment’s notice. The bank panic sparked by the Lehman Brothers collapse resulted in a massive shortage of reserves that was filled with a 578 percent increase in discount loans.

Although economic prosperity is linked to core tenets of Austrian economics, namely economic and political freedom, the school is routinely dismissed by mainstream macroeconomists. This is so despite prices falling, quality rising, and consumer choice increasing in markets that are relatively free of government intervention (e.g., cellular phones, televisions, software, and computers). On the other hand, inflation, stagnant quality, inefficiency, or moral hazard is typical of industries regulated, managed, or owned by government (e.g., banking, education, healthcare, and the post office). Thus, it is surprising that the school has not gained wider acceptance. This is perhaps due to mainstream macroeconomics offering sellable solutions. Whereas Austrian economists generally refuse to support politically-popular welfare programs when unemployment is high, mainstream macroeconomists do not. Keynesian “solutions” like public works projects, extensions to unemployment insurance compensation, and payroll tax cuts, are well-received among working-class voters. Supply-side and Chicago-School policy prescriptions, like capital gains tax rate cuts, low interest rates, and deregulation, appeal to investors and entrepreneurs.

Mainstream macroeconomics’ sellable solutions have consequences, which are fixed with additional interventions. The IRS tax code has nearly doubled in length to over 70,000 pages in twenty years. During that same period, over 1.4 million pages have been added to the Federal Register. During the last five years, the Fed has held rates near zero and paid banks to not make loans. Consequently, the accumulation of intervention has coincided with long-run growth slowing to a crawl.

How did mainstream macroeconomics miss it, and why has it doubled down on policies that appear to be setting the table for future asset bubbles and financial crises?

Too much aggregation is mainstream macroeconomics’ fatal conceit.

Consumption and investment are more realistically modeled as short-run tradeoffs in CBM. When consumers save more, the supply of loanable funds rises. This lowers interest rates and raises investment as consumption and profits fall.

Unlike in mainstream macroeconomics, wages in CBM‘s segmented labor markets do not all fall when GDP declines. Though falling profits decrease labor demand and wages in the final stage, labor demand and wages in earlier stages rise as firms redirect resources. The widening wage differential draws workers to earlier production stages. This migration reduces final stage labor supply and raises earlier stage labor supply, resulting in the final stage wage rising up toward the wages that prevail in earlier expanding stages.

After savings-induced investments have worked their way through the economy, the productive capacity of the economy has expanded, resulting in higher overall consumption. Though this contradicts Keynes’s Paradox of Thrift, it does not work well when government interferes in markets.

Market interventions like social security, minimum wages, food stamps, and interest rate setting reduce savings, and make wages and prices sticky. Because persistently high unemployment is the unintended consequence of these interventions, monetary intervention is enacted to cure it.

When the Fed creates reserves, interest rates fall, investment increases, and savings decline. The wedge that is driven between investment and savings equals the amount of money that the Fed creates. The resulting malinvestment and overconsumption represent a competition for resources, which pushes asset prices ever higher and the economy beyond its productive capacity. This is what Austrians refer to as a Fed-induced boom.

The boom is unsustainable. Investment and consumption are higher than they would have been in the absence of monetary intervention. As asset bubbles inflate, yields increase, but so do inflation expectations. To dampen inflation expectations, the Fed withdraws stimulus. As soon as asset prices start to fall, yields on heavily leveraged assets are negative. As asset prices decline, increasingly more investors are underwater. Loan defaults rise as mortgage payments adjust up with rising interest rates. When asset bubbles pop, the boom becomes the bust.