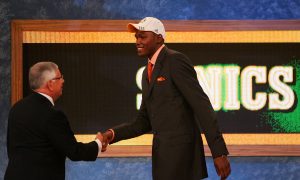 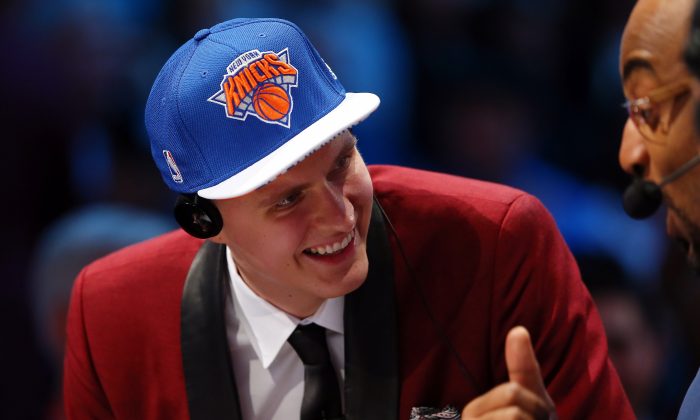 The Knicks took Kristaps Porzingis with the fourth pick in the 2015 NBA Draft—much to the chagrin of most Knicks fans. (Elsa/Getty Images)
NBA

Let’s get this out of the way first: It’s difficult projecting an amateur player’s future value. Especially one from Europe, who isn’t visible in the college basketball game.

That said, the more you watch the player the Knicks took with the fourth pick—Latvia’s Kristaps Porzingis—the more you can’t help like the 7-foot-2-inch center.

He looks great doing the catch and shoot off screens, he runs the court better than most 7-footers, and he can even drive the lane. Of course, that’s only one side of the court and he’s only 19, but there’s clearly some talent there.

On draft night, though, that clearly was not the consensus among Knicks fans, who mercilessly booed the selection.

Perhaps they were reminded of the last time the still-popular franchise, which hasn’t won a title in more than 40 years, took a European center in the first round.

The year was 1999, and the Knicks took France’s 7-foot-2-inch center Frédéric Weis with the 15th pick—one spot ahead of where local prospect Ron Artest was drafted.

Weis never played a minute in the NBA and was most famous for getting “posterized” by a vicious Vince Carter dunk in the 2000 Olympics, when Carter jumped over a ducking Weis for the slam.

But for better or for worse, Porzingis is not Weis, and the Knicks and team president Phil Jackson were in a tough spot when they took him—the fourth spot. They didn’t have one of the top three picks, thus excluding them from taking Karl-Anthony Towns, D’Angelo Russell, and Jahlil Okafor—the consensus three biggest talents in the draft.

It’s also perceived that the big man is more of a raw project than some of the college players who went after him like Willie-Cauley Stein and Frank Kaminsky, which is true. But just because Carmelo Anthony isn’t getting any younger (he’s 31) doesn’t mean you take a low-ceiling player because he projects to be better that first season. If he’s good, it won’t take long to show it.

German-born Dirk Nowitzki—who was drafted ninth overall in 1998—averaged 8.2 points his rookie season as a 20-year-old before jumping to 17.5 the next year. The 2007 MVP is now seventh all-time in points.

Spain’s Pau Gasol was taken third overall in 2001, and the 21-year-old promptly went out and averaged 17.6 points, 8.9 rebounds, and 2.1 blocks per game as a rookie and hasn’t looked back since.

It doesn’t matter where Prozingis is from—or how old Carmelo Anthony is. If he’s as good as advertised, it’ll work out quickly.