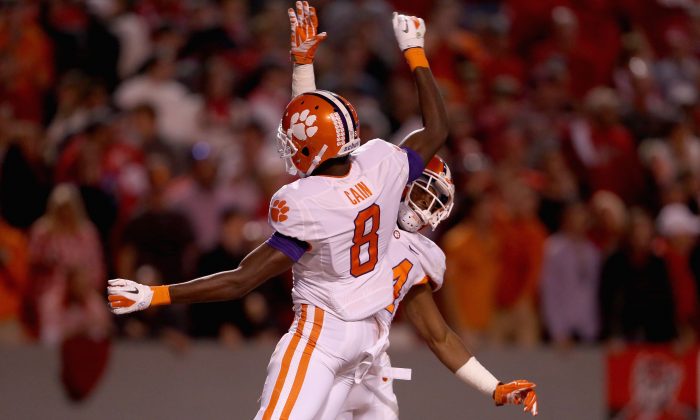 The undefeated Clemson Tigers are No. 1 in the initial CFP rankings this week, yet it guarantees them nothing for next week or the all-important final ranking in December. (Streeter Lecka/Getty Images)
College Sports

The College Football Playoff committee released its first rankings on Nov. 3 and they will come out with an updated list once a week until the first week of December—which will then decide the four playoff teams.

But as we learned last year, the initial rankings don’t really mean much. In fact, not until the committee releases its final rankings on Dec. 6 is there really any reason to pay attention to them.

One big reason is the CFP committee doesn’t do it the way AP rankings are traditionally done—once a team is ranked ahead of another, all they have to do is keep winning to stay ahead.

The AP’s top 25 follows a predictable formula. Win and your team moves up. If there are multiple undefeated teams (like we have right now), whatever the order is now, that order will generally stay until one of them loses and gets passed up by the rest.

This isn’t to say that the AP top 25 is more exciting to follow or anything—they just don’t determine the national champion anymore. With four playoff spots at stake, the committee’s rankings have much more riding on them.

But as the committee members showed last year, their ideas of what teams should be in are fickle and can change from week to week—without notice. The team they love this week may not be the team they love next week. Only the final ballot matters.

This isn’t to judge their method as a bad way to rank teams. How teams play can be fickle as well. Previously unbeaten Oklahoma looked lost in a 24–17 defeat to 1–4 Texas in early October. The very next week, they beat 3–2 Kansas State 55–0 in Manhattan.

Heisman Trophy Watch: Why These 4 Players Are the Favorites

Last year, the selection committee had 10–1 TCU ranked third (ahead of Florida State, Ohio State, and Baylor) in its next-to-last ranking. Win and they’re in, right? Wrong. During that final weekend, the Horned Frogs beat unranked Iowa State 55–3 the next game out and yet were subsequently dropped three spots in the rankings—and out of the playoffs.

All things equal, TCU’s opponent wasn’t as impressive as were the three teams behind them, but supposedly things weren’t equal—the committee had them ranked higher the previous week. Did that mean nothing? Apparently so, and whether it was the right move or not is irrelevant now. But, if the committee’s previous rankings mean nothing to them, why should they mean anything to us?