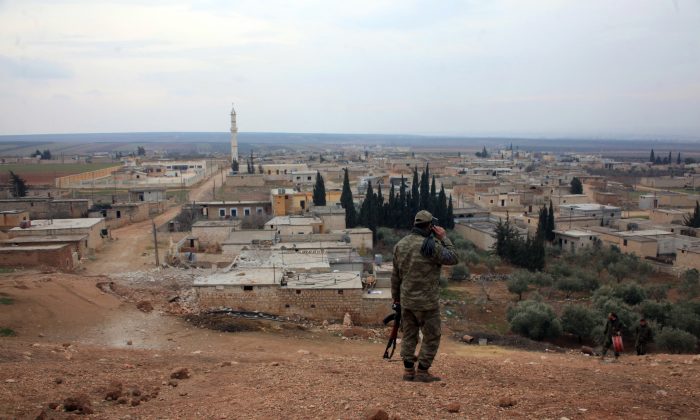 A member of the Syrian government forces talks on the phone as he patrols after they took control of the village of Kiffin, on the northern outskirts of the embattled city of Aleppo, on the road leading to Gaziantep, from opposition forces on Feb. 11, 2016. (George Ourfalian/AFP/Getty Images)
Middle East

BEIRUT—Across a narrow strip of border territory near the Euphrates River, a ferocious battle with huge implications for Syria’s civil war is playing out, one that also risks erupting into a regional conflict.

The fight for control of Aleppo pulls in all the major players in Syria’s civil war over a prized strip of rebel-held land near the Turkish border.

A look at this stretch of territory sometimes referred to as the Azaz corridor:

The area is a nearly 100-kilometer (60-mile) border zone stretching from Azaz in the west to the town of Jarablus near the Euphrates River, down to the northern suburbs of Aleppo city. The zone is wedged between Kurdish-controlled areas to the east and west. It includes Azaz and Marea, two strongholds of Turkey-backed rebels fighting to topple President Bashar Assad; and Jarablus, al-Bab and Manbij, held by the Islamic State (ISIS). Syrian government troops, backed by Hezbollah and Iranian forces, are pushing toward the north from around Tel Rifaat. Warplanes from the U.S.-led coalition pound ISIS-held areas in the zone, while Russia, a key Assad backer, bombs the rebels.

The outcome of the fight in Aleppo may to a large extent determine the outcome of the 5-year-old conflict. This is because the town of Azaz, with its border crossing of Bab al-Salameh, has been a lifeline for the opposition since it fell into rebel hands in 2012. A route known as the Azaz corridor links rebel-held eastern Aleppo with Turkey. If the rebels lose this corridor, they would effectively lose Aleppo. The entire border with Turkey would be sealed off, its control shifting to anti-Turkish Syrian government or Kurdish forces.

The Kurds and ISIS

Kurdish fighters, who have been the most successful in the war against ISIS and are allied with both the U.S. and Russia, control most of the 910-kilometer (565-mile) boundary with Turkey, interrupted only by a patch of rebel- and ISIS-held land. They are taking advantage of the chaos to advance and try to link the two enclaves they control to the east and west. They have advanced eastward from Afrin and from the west to the edge of Azaz, triggering alarm in Ankara, which responded with artillery on Kurdish positions. Turkish Prime Minister Ahmet Davutoglu on Monday vowed the “harshest reaction” should the Kurdish People’s Protection Units, or YPG, advance on Azaz, a town near the border held by anti-Assad rebels. The Kurds are also preparing to move in on ISIS-held areas, starting with Jarablus just east of the Euphrates.

Turkey has for years lobbied the international community for a no-fly zone in this strip of territory along its border—a plan that opens the possibility of a safe haven for tens of thousands of displaced Syrians. Washington has long rejected that, fearing it would draw U.S. forces further into the civil war. Last year, the U.S. and Turkey announced they would create an ISIS-free zone in the area, but that idea went nowhere. Turkey is still toying with the idea of a ground incursion to secure the area, but a Turkish official said Tuesday there will be no unilateral ground operation. He spoke on condition of anonymity because he was not authorized to talk publicly on the issue. Saudi Arabia has said it also is ready to send ground troops to Syria to fight ISIS and is sending warplanes to an air base in Turkey near the border.

The fighting in Aleppo has sent tens of thousands of people fleeing toward the Turkish border, where they sleep in tents and open fields. It also has disrupted aid deliveries, putting more civilians at risk of being completely cut off. Aid groups estimate that more than 100,000 people have left Aleppo in the past two weeks because of fears the city would become besieged. Fears of more refugees flowing into Europe may change perspectives. German Chancellor Angela Merkel on Monday backed the idea of a no-fly zone in Syria to protect civilians who might otherwise flee the country.