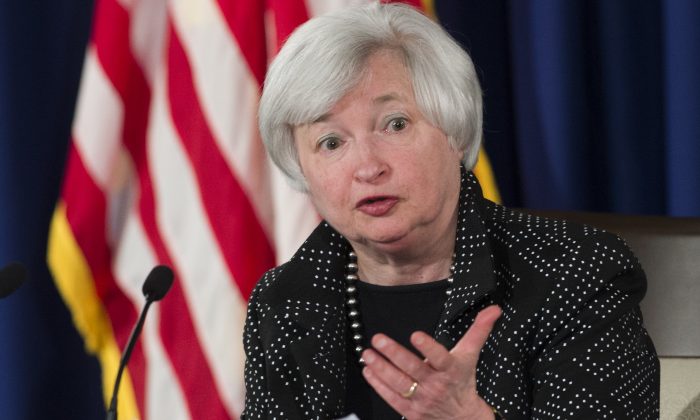 According to the Fed, inflation is low; there are no stock market bubbles and growth remains subdued. So why taper more?

At the June meeting of the Federal Open Market Committee which concluded Wednesday, the Fed slashed its growth estimate for 2014 to 2.2 percent, a big change from the 3 percent it expected in March this year. It also said rates will stay low long after QE ends with the first rate hike coming in the middle of 2015 to support the economy and financial markets.

And yet, it also announced another round of tapering of bond purchases, scaling down the monthly buying of Treasurys to $20 billion (from $25 billion) and mortgage backed securities to $15 billion (from $20 billion), a grand total of $35 billion for the time being.   According to the Fed, quantitative easing (QE) or the buying of Treasury- and mortgage-backed bonds boosts economic activity by keeping rates low and boosting asset prices, the so-called wealth effect. If stocks and house prices go up, people feel richer and are inclined to spend more.

Whether this is true remains to be seen, as GDP cratered to minus 1 percent in the first quarter and forward looking economic surveys don’t show a rebound. On the other hand, stocks have definitely gone up a lot and house prices also rebounded.

So if QE is supposed to boost growth and growth is falling, why do less? The answer is surprisingly simple. For the Fed to conduct QE, it needs bonds to buy. The mortgage-backed market is notoriously illiquid and the Fed is already the largest player there.

With respect to Treasurys, the market is more liquid, but there is a limit. Looking at the issuance of Treasury securities by the federal government in 2014, we see it has only issued $80 billion in longer-term bonds, which the Fed prefers to buy.

On the other hand, despite the tapering, the Fed still bought roughly $150 billion so far this year, far outstripping supply.

Yes, there were other players selling (Russia, China), but Treasurys underpin a host of lending and derivative transactions and private companies and banks need ample supply in order to conduct business.

This is the real reason for tapering and regardless of future growth, the Fed will continue the taper.