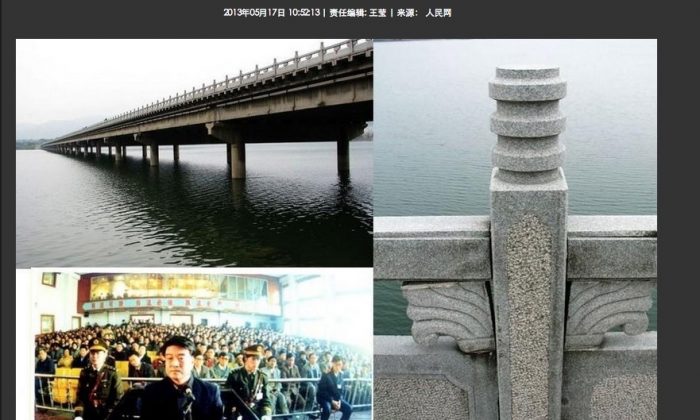 Believing he might soon be appointed vice-premier, Hu Jianxue diverted a national highway over a reservoir, creating the need to build a "bridge" to his future. But instead of promotion, he was given a suspended death sentence. (Screenshot of People’s Daily by The Epoch Times)
China

Why the Communist Party Blames Corruption on Feng Shui

Feng shui is making a comeback in China, despite the regime’s attempts to wipe out traditional culture. In fact, ambitious officials are leading the fray, and being disciplined for corruption based on practices like geomancy and fortune-telling.

A 2007 survey by the Chinese Academy of Governance revealed that over half the county-level officials polled had consulted astrologers, face readers, dream interpreters, and the like; many even retained feng shui masters for advice.

State media have been pouncing on corrupt officials who believe in feng shui, and making an example of them to prove to the public that not everyone can get away with it, while simultaneously getting rid of non-atheist Party members.

A high-profile case dates back to 1995 when Hu Jianxue, a Party secretary in Shandong Province, was told by a diviner that he might soon be appointed vice-premier, but he apparently lacked a “bridge” in his life for this to come true. So Hu diverted a national highway over a reservoir, creating the need to build a bridge. But instead of promotion, he was given a suspended death sentence.

Heeding similar advice was Cui Yanxuan, a Party secretary in Hebei Province, who built half-moon and sun ponds next to the county office building, and also had an old J-6 fighter jet embedded in the road to foster wealth and promotion. Cui was dismissed from his post in 2010.

The Communist Party is well-known for its promotion of state atheism, but it appears such cadres lack faith in this ideology.

Dr. Frank Xie, a business professor at the University of South Carolina Aiken, told The Epoch Times via email that the regime cannot blame corruption on feng shui or any other elements of traditional Chinese culture. He likened the situation to the recent spate of corruption cases involving public funds spent on lavish dining and costly delicacies–the food was not at fault, the officials simply don’t know how to behave, or use public funds.

He continued: “Another reason that the Communist Party is blaming feng shui and using it as a scapegoat for its inability to curtail corruption is that the Party is deeply in fear of anything at odds with its atheist doctrine, as people’s beliefs in higher level beings and supernormal principles will inevitably lead them to question and challenge the Party’s materialistic worldview, its legitimacy, and its grip on power.”

“Ultimately, the question to ask is: Do the corrupt Party officials really believe in feng shui? Or do they just hold the belief that it’s better to do it ‘just in case,’ as this could serve as insurance in case divine beings really do exist?”