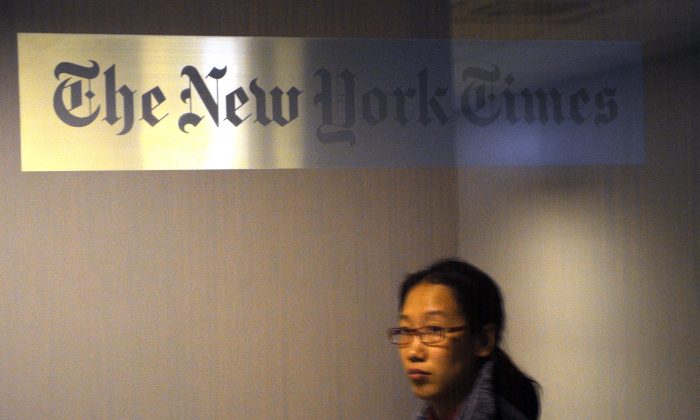 A woman walks past the New York Times office in Shanghai on Oct. 30, 2012, not long after the Times published an article about the wealth of the family of Chinese Premier Wen Jiabao. (Peter Parks/AFP/Getty Images)
Opinion

Why the Chinese Regime Wants to Kick Out Western Journalists Now

It has been widely reported that American reporters in China are having problems getting their residency visas renewed and might soon be forced to leave the country. As more consumers of news pay more attention to China, China news has higher value.

Last year, the New York Times published an article about the wealth of then-Premier Wen Jiabao’s family. The Times article won a Pulitzer Prize. Seemingly a victory of sorts for Western media in China, the article actually serves as tangible evidence of political maneuvering inside China. It also serves as a cautionary tale for how a prominent media company can be oblivious to how it was used as a tool by a political force.

The United States has developed more ties of all kinds with China. Much of what Americans buy is made in China, and China is the single-largest holder of U.S. debt (other than the U.S. Treasury). What is happening in China matters a great deal to Americans.

In talking about their rights, the journalists are approaching this China problem from a Western perspective. They can’t see the real reasons that China wants to kick U.S. reporters out now, at this particular moment in history.

Politics Not as Usual

Since Xi Jinping has become paramount leader, he has been like a captain trying to direct a giant ship—some people call it the “Titanic”—in a big storm. He has been trying hard to keep it from sinking. Any extra push from any direction could be fatal.

This year, Xi started an anti-corruption campaign. In the last 10 years, any such campaign has been a war for power that is disguised under the name of anti-corruption. Under former Chinese Communist Party (CCP) head Jiang Zemin’s rule, the CCP encouraged corruption. The system is set up so that no government official can get anything done without corruption.

With this system, Jiang Zemin could do whatever he wanted to people. All levels of government officials were so corrupt that no one wanted any change that would wipe out their opportunity to get rich.

In the trial of disgraced former Politburo member Bo Xilai earlier this year, one can see how corruption charges are used. He was charged with corruption big enough to send him to jail, but small enough not to cause the Chinese people to feel strong resentment toward the CCP. The corruption charges were just a tool in the war for power.

Any Western journalists who participate in exposing corruption of high-level officials are unwitting participants in a high-stakes power struggle. And in doing so they are shooting in the dark.

Last year, Bloomberg published an article on the wealth of Xi Jinping’s family. The New York Times article on Wen’s family wealth (mentioned above) was published at the exact time that Wen Jiabao and then-CCP head Hu Jintao were taking down Bo Xilai. Unfortunately, these two articles resulted from falling into traps set up by Zhou Yongkang’s camp, and the information was certainly fabricated.

Bo Xilai was allied with domestic security czar Zhou Yongkang. Through Zhou’s control of the Political and Legal Affairs Committee, they had power over all of the legal system, the public security system, and prisons and labor camps. They had built strong relations with leading websites inside China, and had also built relationships with media in the West.

Zhou and Bo had a complete plan to take the top power in China. They had long planned to defame Wen Jiabao, and to defame Xi Jinping, and their fabrications were well-prepared.

In China, media has always been a weapon controlled by top CCP officials. Zhou and Bo had systematically controlled the media, including the Internet. Google losing out to Baidu is part of the game, because Baidu is easier for them to manipulate.

The Bloomberg article on Xi and the New York Times article on Wen both had direct effects on the struggle for power at the top.

The Western media should talk about their rights. They should demand the Chinese regime respect the press and they should report as aggressively as they can inside China. At the same time, Western journalists should learn how not to be used as instruments in China’s internal power struggles.

In general, when Western journalists talk to Chinese people in China and gather highly sensitive information, such as the wealth of the CCP’s leading families, it is highly possible their encounters and conversations were carefully set up.

The CCP is in a very fragile situation. Xi Jinping understands that. And he is trying hard to keep the “Titanic” afloat. If any additional compartment gets broken, the CCP ship will sink right away. He will have no difficulty in tossing the rights of Western press overboard if he thinks that will help the ship stay afloat a little longer.

No one’s rights in China are respected, and the Western media shouldn’t be surprised that, if they meddle in the struggle for power—whether intentionally or inadvertently—they will get tossed out.