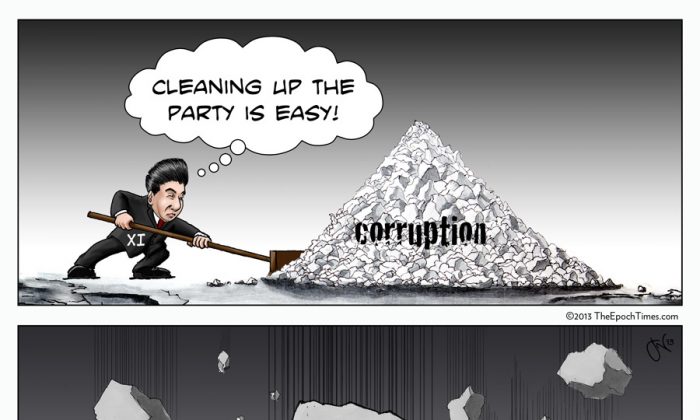 Pollution is a big issue in China because it affects everyone. People get anxious when discussing the polluted air, sand storms, contaminated rivers and groundwater, and “cancer villages,” where toxic chemicals are having hazardous effects on the villagers.

Chinese officials talk about protecting the environment, but they get a special supply of clean food, water, and even air. In December 2012, when new Party leader Xi Jinping gave his “China Dream” speech, part of his vision included “a better environment.”

So if everyone is concerned about China’s environment, why is the pollution getting worse by the day, with the number of cancer villages increasing? It’s obvious that the officials are saying one thing but doing another: They are encouraging sacrifice of the environment in exchange for economic development and are penalizing those who spend money on cleaning up the environment.

Why is this? For starters, the Communist Party is an illegitimate dictatorship. To prolong its reign, the regime tries very hard to boost and boast about economic growth.

Before 2012, the Party tried desperately to keep the gross domestic product (GDP) growth rate around 8 percent. After 2012, it went all out to keep the rate around 7 percent. Below this level, unemployment will proliferate, causing social instability that would endanger the regime’s rule.

A recent study by the U.S. National Bureau of Economic Research proves this point with solid numbers. The author looked at 283 cities in China and found that officials who spent their budgets treating pollution normally have no hope of being promoted. However, those who spent large sums on building highways and other infrastructure—increasing the local GDP at the expense of the environment—are very likely to be promoted.

In other words, if an official takes care of the people’s welfare and deals with pollution, he should not expect to be promoted. However, if an official raises the GDP figure, the regime gives him a raise without caring how much pollution was generated. Driven by this blatant personal gain, how many officials can we expect to protect the environment?

The Chinese regime also prohibits environmental protection movements by the people. Since 1996, the number of mass demonstrations and riots due to environmental issues has increased by about 30 percent each year.

From the p-xylene pollution in the coastal cities of Xiamen, Ningbo, and Dalian, to the molybdenum-copper pollution in Shifang in southwest China, and the Oji Paper Company’s waste pollution in Qidong, near the coast in central China, local officials colluded with companies and allowed polluting projects before the public became aware of the consequences.

The people have no channel through which they can appeal the state’s decisions. So they resort to demonstrations and riots, and the regime responds by “stabilizing society”—mobilizing the Armed Police force to suppress protesters. This has become the Party’s fixed protocol for solving environmental problems.

China’s dictatorship and the regime’s animosity toward the people’s will are also responsible for the severe pollution. The Western world’s environmental protection policies began as civil movements in the 60s and 70s, with democracy required for their success. The Americans achieved a strong foundation for environmental protection through votes and demonstrations.

During Japan’s industrialization, major localized pollution incidents caused local residents to become severely ill. In the 60s, there were many civil groups advocating environmental protection and challenging the Liberal Democratic Party, the dominant party after the war, which did not care about environmental pollution. These groups also encouraged people to boycott the worst companies.

The pollution in China reflects the corruption of the communist regime—pollution will exist as long as the Party exists. The soil is contaminated by heavy metals. Industrial chemical wastes are found in rivers, lakes, and groundwater, turning them an array of colors. The air is filled with tiny particles that cause lung cancer, and the food is loaded with toxins.

The Chinese have reached a critical point in their quality of life. If they continue to be indifferent and continue to be duped by the regime, the Chinese people will be committing a kind of suicide.