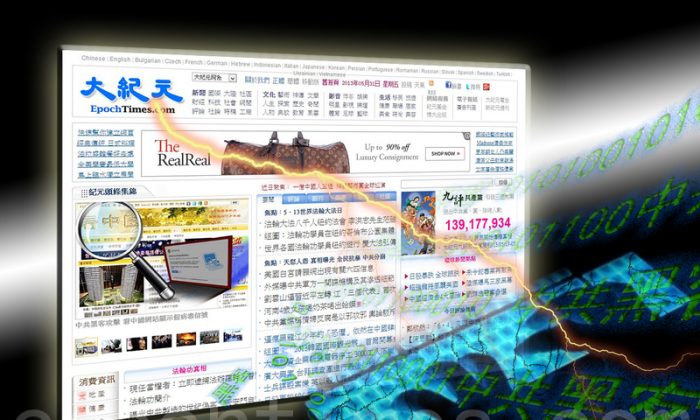 On July 30, the CCP launched the most severe attack ever against Epoch Times website, causing some temporary inconvenience for readers. However, readers were seeking news about the investigation of former security czar Zhou Yongkang and traffic doubled, in spite of the hacking. (Epoch Times composite image)
Opinion

In spite of an effort to take Epoch Times offline, traffic doubled

The Epoch Times website was hacked again on July 30. There must have been big news happening in China.

The attack coincided with the news that a formal investigation was launched against the Chinese regime’s former domestic security czar, Zhou Yongkang.

In what Epoch Times technicians described as the biggest attack ever, the hackers employed a distributed denial of service (DDoS) attack, meaning that a network of computers was used in concert to bombard Epoch Times servers with messages, attempting to overwhelm it.

In some areas of the world during the approximately 10-hour-long attack, readers had trouble opening Epoch Times web pages. However, the attack failed, as the website’s normal traffic doubled.

Readers were looking for, and the hackers were targeting, an Epoch Times article that linked Zhou Yongkang’s fate to the genocidal crimes committed by him and other members of the faction loyal to former Chinese Communist Party (CCP) head Jiang Zemin.

Epoch Times coverage of the unraveling of Jiang Zemin’s faction has drawn the attention of readers and hackers ever since Wang Lijun, the former right-hand man of the former Politburo member Bo Xilai, fled to the U.S. Consulate in Chengdu on Feb. 6, 2012.

Epoch Times reporting on the Wang Lijun scandal triggered a political crisis for the CCP, and at 4 p.m. on March 28, 2012 and 9 a.m. on March 29, the Epoch Times website suffered massive attacks.

In August 2012, after the Epoch Times website exclusively reported the inside story of the case involving Bo Xilai and his wife Gu Kailai, the Chinese people were shocked at the couple’s involvement in murder, forced organ harvesting, and trafficking in human bodies. Beginning on Aug. 20, the Epoch Times website came under an attack unprecedented in scale.

On Aug. 22, 2013, at the eve of Bo Xilai’s trial, the CCP launched a 36-hour cyber attack against the Epoch Times news network.

Reports about the inhuman torture in Masanjia Labor Camp published on the morning of May 27, 2013 anticipated Xi Jinping’s visit to the United States by a little more than a week. Hackers launched attacks many times stronger than previous attacks, attempting to take Epoch Times offline.

This record of the CCP repeatedly hacking Epoch Times is a testimony to the paper’s reporting.

As the CCP’s crisis has unfolded since February 2012, readers have sought out the precise analyses and uncanny predictions of Epoch Times.

At the moment that Bo Xilai fell from power on March 15, 2012, Epoch Times predicted that not only Bo Xilai would face a heavy sentence, but also that Zhou Yongkang would be arrested. The investigation of Zhou announced on July 30 this year fulfilled the prediction made over two years ago.

Other examples of predictions that have come true: the demotion of members of the formerly powerful Political and Legal Affairs Committee, the abolition of the re-education through labor system, and the sacking of the oil boss Jiang Jiemen.

Chang Chinhua, a professor in the Institute of Journalism at National Taiwan University, said that since the former CCP leader Jiang Zemin launched the persecution of Falun Gong, the issue of Falun Gong has become the core, most sensitive, and most feared problem for the CCP. Over the years, Epoch Times persistent tracking and reporting on Falun Gong has caused the CCP to seek to intimidate, harass, and attack Epoch Times.

Because Epoch Times has grasped mainland China’s core social and political issue—Falun Gong—it has been able to understand and accurately predict events in China.

In 1999 Jiang Zemin launched a war against his own nation, seeking to eradicate a spiritual discipline embraced by 100 million Chinese. The record of torture, brainwashing, and forced live organ harvesting has become a burden the Jiang faction can’t escape.

That faction’s efforts to avoid responsibility have set in motion the drama that is today consuming the CCP and to which Epoch Times has proven the most reliable guide. Just ask a hacker.