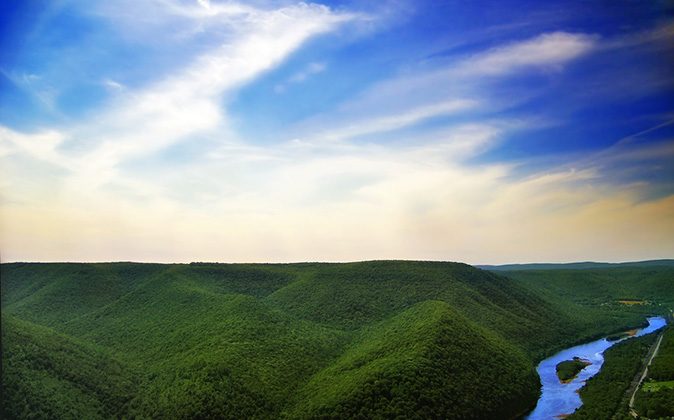 Scientists had previously known about the volcanic rock structure under the 1,500 mile-long Appalachian mountain chain, says Cindy Ebinger. "What we didn’t understand was the size of the structure or its implications for mountain-building processes." (Nicholas A. Tonelli/Flickr, CC BY)
Environment

Why the Appalachian Mountains Veer Off Course

A dense, underground block of rigid, volcanic rock forced a shift in the 1,500 mile Appalachian mountain chain as it formed millions of years ago.

The chain runs along a nearly straight line from Alabama to Newfoundland—except for a curious bend in Pennsylvania and New York State.

Scientists had previously known about the volcanic rock structure under the Appalachians, says Cindy Ebinger, professor of Earth and environmental sciences at the University of Rochester. “What we didn’t understand was the size of the structure or its implications for mountain-building processes. When the North American and African continental plates collided more than 300 million years ago, the North American plate began folding and thrusting upwards as it was pushed westward into the dense underground rock structure—in what is now the northeastern United States. The dense rock created a barricade, forcing the Appalachian mountain range to spring up with its characteristic bend.

For a new paper published in the journal Earth and Planetary Science Letters, researchers studied data collected by the Earthscope project. Earthscope makes use of 136 GPS receivers and an array of 400 portable seismometers deployed in the northeast United States to measure ground movement.

Ebinger and Margaret Benoit, associate professor of physics at the College of New Jersey, also made use of the North American Gravity Database, a compilation of open-source data from the US, Canada, and Mexico.

The database, started two decades ago, contains measurements of the gravitational pull over the North American terrain.

Most people assume that gravity has a constant value, but when gravity is experimentally measured, it changes from place to place due to variations in the density and thickness of Earth’s rock layers. Certain parts of the Earth are denser than others, causing the gravitational pull to be slightly greater in those places.

Data on the changes in gravitational pull and seismic velocity together allowed the researchers to determine the density of the underground structure and conclude that it is volcanic in origin, with dimensions of 450 kilometers by 100 kilometers.

This information, along with data from the Earthscope project ultimately helped the researchers to model how the bend was formed.

The research project is a “foundation study” that will improve scientists’ understanding of the Earth’s underlying structures, Ebinger says. As an example, the findings could provide useful information in the debate over hydraulic fracturing—popularly known is hydrofracking—in New York State.

Hydrofracking is a mining technique used to extract natural gas from deep in the earth. It involves drilling horizontally into shale formations, then injecting the rock with sand, water, and a cocktail of chemicals to free the trapped gas for removal.

The region just west of the Appalachian Basin—the Marcellus Shale formation—is rich in natural gas reserves and is being considered for development by drilling companies.

NASA and the National Science Foundation contributed funded to the work. Source: University of Rochester. Republished from Futurity.org under Creative Commons License 3.0.