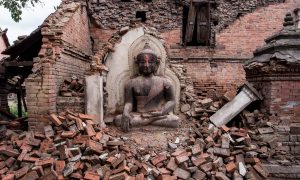 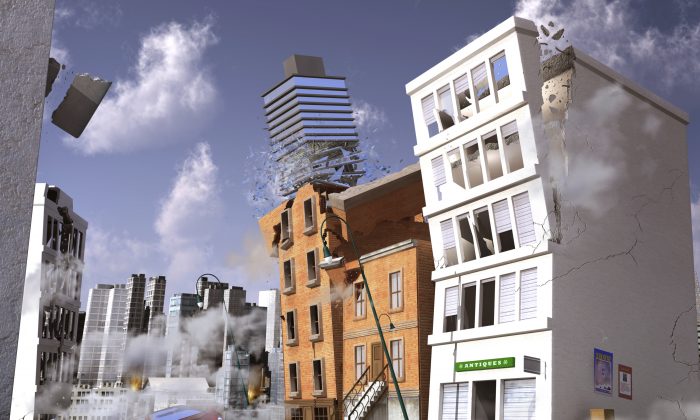 Earthquake in a city. (estt/iStock)
Environment

In March 2011, a massive release of stress between two overlapping tectonic plates occurred beneath the ocean floor off the coast of Japan, triggering a giant tsunami.

The Tohoku quake resulted in the death of more than 15,000 people, the partial or total destruction of nearly 400,000 buildings, and major damage to the Fukushima nuclear power plant.

This “superquake” may have been the largest in a series of earthquakes, marking the end of what’s known as a supercycle: a sequence of several large earthquakes.

A research team at ETH Zurich headed by Taras Gerya, professor of geophysics, and Ylona van Dinther is studying supercycles such as this that occur in subduction zones. Geologists use the term “subduction zone” to refer to the boundary between two tectonic plates along a megathrust fault, where one plate underthrusts the other and moves into the earth’s mantle.

These zones are found all over the world: off the South American coast, in the US’s Pacific Northwest, off Sumatra, and in Japan.

Earthquakes don’t occur at just any point along a megathrust fault, but only in the fault’s seismogenic zones. Why? In these zones, friction prevents relative movement of the plates over long periods of time.

“This causes stresses to build up; an earthquake releases them all of a sudden,” explains ETH doctoral student Robert Herrendörfer.

After the quake has released these stresses, the continued movement of the plates builds up new stresses, which are then released by new earthquakes—and an earthquake cycle is born.

In a supercycle, the initial quakes rupture only parts of a subduction zone segment, whereas the final “superquake” affects the entire segment.

Several different theories have been advanced to explain this “gradual rupture” phenomenon, but they all assume that individual segments along the megathrust fault are governed by different frictional properties.

“This heterogeneity results in a kind of ‘patchwork rug’,” says Herrendörfer. “To begin with, earthquakes rupture individual smaller patches, but later a ‘superquake’ ruptures several patches all at once.”

In a new article recently published in Nature Geoscience, Herrendörfer’s research group proposed a further explanation that doesn’t include this patchwork idea. Simply put: the wider a seismogenic zone, the greater the probability of a supercycle occurring.

To understand this, you first have to picture the physical forces at work in a subduction zone. As one plate dives beneath the other at a particular angle, the plates along the megathrust fault become partially coupled together, so the lower plate pulls the upper one down with it.

Researchers ran computer simulations of this process, with the overriding plate represented by a wedge and the lower by a rigid slab. Since the plates are connected to each other only within the seismogenic zone, the wedge is deformed and physical stresses build up.

In the adjacent earthquake-free zones, the plates can move relative to each other.

These stresses build up most rapidly at the edges of the seismogenic zone. If the stress there becomes greater than the plate’s frictional resistance, the wedge decouples from the lower plate and begins to move relative to the subducting plate.

As the relative speed increases, the frictional resistance decreases—allowing the wedge to move even faster. The result is a rapid succession of interactions: an earthquake.

The earthquake spreads out, stopping only when it reaches a point where the frictional resistance is once again greater than the stress. That is where the slip event ends and both plates couple together again.

“This means that the first earthquakes in this area will only partially rupture the seismogenic zone,” says Herrendörfer.

In narrower zones, it takes just one earthquake to rupture the entire zone. In wider zones that are about 120 kilometers (75 miles) or more across, the stress is released in a series of several quakes and ultimately in a superquake.

“To date, supercycles have been observed only in subduction zones with a larger-than-average seismogenic zone about 110 kilometers (68 miles) across,” says Herrendörfer.

Based on their findings, the researchers have defined further regions in addition to those already known as places that could be affected by supercycles—namely, the subduction zones off Kamchatka, the Antilles, Alaska, and Java.

However, Herrendörfer cautions against jumping to conclusions.

“Our theoretical models represent nature only to a limited extent, and aren’t suitable for predicting earthquakes,” he emphasizes. “Our efforts were aimed at improving our understanding of the physical processes at work in an earthquake cycle.

“In future, this knowledge could be used for generating long-term estimates of the risk of earthquakes.”

The method can also be applied to continental collision zones, such as the Himalayan mountain range, where Nepal was recently struck by a devastating quake.