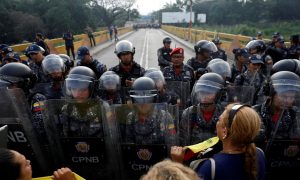 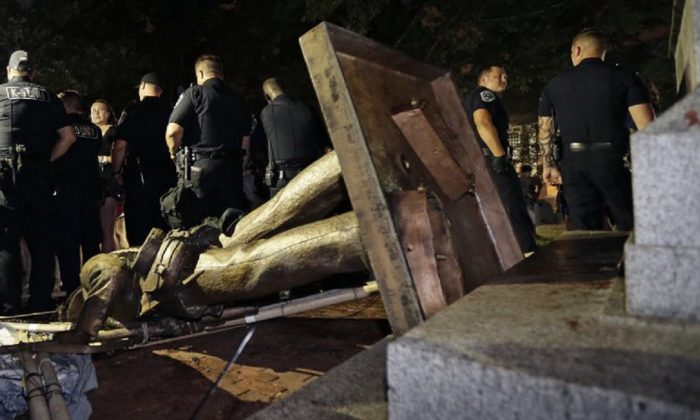 Police stand guard after the Confederate statue known as Silent Sam was toppled by protesters on campus at the University of North Carolina in Chapel Hill, N.C. ,on Aug.20, 2018. (Gerry Broome, AP Photo/File)
International

Why Socialists Want to Destroy Our Memory of the Past

The Swedish government is weighing whether it should ban historical imagery including rune script and Norse symbols, since these may be viewed as “hate” symbols.

This isn’t an isolated incident, either. In the United States, historical statues and imagery across the country—from war memorials, to Civil War leaders, to paintings of George Washington—have been targeted for destruction by individuals who find them offensive.

A new history is being shown to youth in the United States and other countries that criticizes their traditional cultures, curses their founding stories, and condemns their founders. Students are being taught to hate where they come from, and to interpret history through the lens of socialism.

It is a battle for memory, in a war of ideas. And we need only look at countries that have already gone through this process to see what the goals are.

In China, the ruling Chinese Communist Party (CCP) similarly destroyed the cultural relics of the country, its values, and its traditions. This was done heavily during its Cultural Revolution in the 1960s and 1970s.

The CCP’s destruction of China’s 5,000 years of culture didn’t end there, however. Even recently, the CCP banned depictions in film and in video games of the cultural heritage that it destroyed.

The same thing happened under communist and socialist regimes in parts of Europe. This process was described by former Polish Minister of Education Ryszard Legutko in his book “The Demon in Democracy: Totalitarian Temptations in Free Societies,” as being meant to wipe out all memory of what socialism aimed to destroy.

Legutko said that communism was a system that tried to recreate history in its own image, through movements “against memory.” Those who stood against these systems not only faced the gulags, agitated mobs, and secret police, but were also “fighting for memory against forgetting, knowing very well that the loss of memory strengthened the communist system by making people defenseless and malleable.”

When Karl Marx envisioned regimes under socialism and communism—neither of which existed at the time—he believed they would destroy all the beliefs, traditions, and morals of the world as it was. He and other communists that followed believed their ideas superseded all others, and that in the brutal regimes that would follow to create these systems, the ends would justify the means.

After taking power, the socialist tyrants typically are not satisfied with the mere surface destruction of traditional culture and belief, but also seek to destroy the past through criticizing and altering history.

With these values and traditions destroyed, the ruling regime is able to embed its power into every pore of society. Legutko wrote that the socialist leaders believed “the political system should permeate every section of public and private life,” to include “ethics and mores, family, churches, schools, universities, community organizations, culture, and even human sentiment and aspirations.”

“By being identified as serving the cause of the bourgeoisie, the philosophers, artists, and writers could be arraigned on a charge of being the enemies of the socialist revolution and standing in the way of the future, often with lamentable consequences for the defendants,” he wrote.

As Legutko explained, this same philosophy of destroying the past doesn’t just exist under full socialist regimes, but also under the liberal-democratic systems of the West. He wrote, “Both systems generate—at least in their official ideological interpretations—a sense of liberation from the old bonds.”

The systems at play are similar to what author George Orwell envisioned in his book “1984,” in which his fictional English Socialist (IngSoc) regime had established absolute control over all of society.

Part of what secured the regime’s control, Orwell wrote, was a system to make people forget they ever believed in anything that would oppose the regime. “This demands a continuous alteration of the past,” he wrote, noting that someone under this system “tolerates present-day conditions partly because he has no standards of comparison.”

Using this, Orwell explained, the individual is made to “believe that he is better off than his ancestors and that the average level of material comfort is constantly rising.”

True to life for today’s socialist regimes, Orwell wrote that past events “survive only in written records and in human memories.”

When socialism was taking over in Europe in the early 20th century, author G.K. Chesterton described its attempts to wipe out all that once existed in order to build its envisioned system as something based in a distrust of the common man.

He wrote: “In these primary things in which the old religion trusted a man, the new philosophy utterly distrusts a man. It insists that he must be a very rare sort of man to have any rights in these matters; and when he is the rare sort, he has the right to rule others even more than himself.”