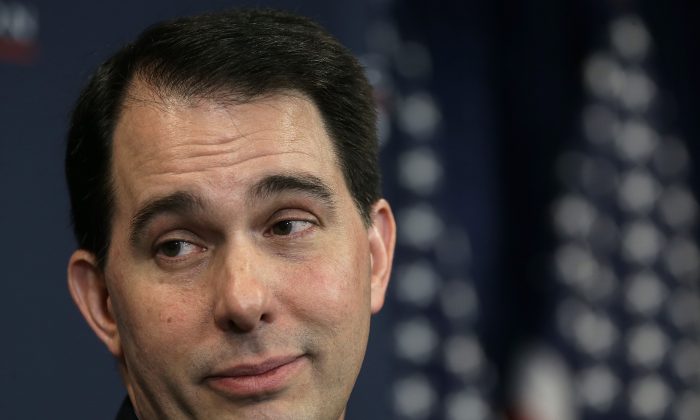 Why Scott Walker’s Views on Evolution are Irrelevant

The media whipped itself into a frenzy this week after Wisconsin governor Scott Walker dodged a question on whether he believed in the theory of evolution, marking his ambivalence as one more reason he’s not qualified to be president.

“For me, I’m going to punt on that one as well. That’s a question a politician shouldn’t be involved in one way or another,” Walker said at an event in London on Feb 11, and later tweeted “Both science & my faith dictate my belief that we are created by God. I believe faith & science are compatible, & go hand in hand.”

Critics seized Walker’s ambiguous response to paint him as a revanchist who wants to bring creationism back into the classroom. The Huffington Post said that “Some 90 years after the Scopes Trial, the theory of evolution and its place in the schools remain matters of public debate. Two states, Louisiana and Tennessee, now allow public schools to teach “alternatives” to evolution.”

The problem is that the Supreme Court has ruled teaching creationism in the classroom  as unconstitutional as far back as 1987 in Edwards v. Aguillard, and in 2005 ruled similarly against intelligent design in Kitzmiller v. Dover. Louisiana and Tennessee aren’t teaching creationism in public schools, but private schools partially funded by school vouchers, and a president would require considerable political capital to push through a federal vouchers program.

Even more risible is Slate’s suggestion that because of evolution’s role in framing “modern microbiology and pathology, disbelief in evolution could lead to bad policy choices around disease control and other public health concerns,” as if any president in living memory ever played a role in micro-managing the Centers for Disease Control and Prevention.

Walker’s ambivalence on the subject doesn’t tell us anymore about Walker than what’s already widely known, that he’s a conservative and a practicing Christian. Of course, the purpose of the criticism is to have Walker stake out a definitive position on evolution, which would invariably either alienate his base or the general public.

According to a Pew report from 2013, 60 percent of Americans believed in evolution whereas 33 percent did not. The 33 percent figures prominently among Walker’s supporters in the GOP primary, putting Walker in a lose-lose situation regardless of his answer.

In 2007, then-presidential candidate Mitt Romney split the difference on the question, stating that he believed in evolution as guided by God, a view held by 24 percent of Americans in the Pew report.

Unlike Walker however, Romney had the advantage of running in an election before the rise of a Tea Party that has moved the center of gravity of the Republican Party further right. Walker made the right choice in keeping his beliefs on evolution under the lid, and unknown it will likely stay.