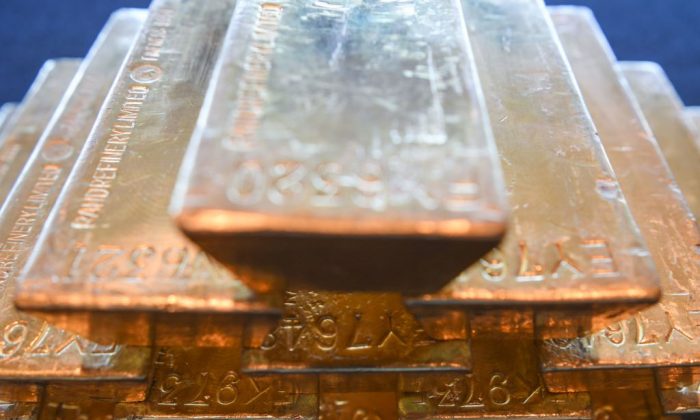 Why Russia and Turkey Are Such Gold Bugs

Since December 2017 Russia has cut its holdings of U.S. foreign debt by more than half. Instead, it’s been increasing the share of gold in its international reserves. That’s understandable behavior for a country that has to deal with an unpredictable U.S. sanctions policy, but it’s also part of a trend. Foreign governments and international organizations account for a decreasing share of outstanding U.S. debt, and some economies have in recent years aggressively upped the share of gold in their reserves instead.

The Russian reduction of Treasury holdings, to $48.7 billion in April 2018 from $102.2 billion in December 2017, has been nothing short of dramatic, though it wasn’t a huge blow to the U.S. Russia’s holdings of American government bonds have long been dwarfed by those of China and Japan, as well as Brazil and some European countries. The U.S., with a debt of almost $21.2 trillion, can afford not to notice fluctuations in the tens of billions of dollars by an authoritarian state’s damage control efforts and attempts to get away from the dollar.

The U.S. can lull itself into a certain sense of security as it watches the foreign-owned stock of its debt securities increase in absolute terms and as the dollar slips only slowly as a share of official foreign exchange reserves. The U.S. currency, according to the International Monetary Fund, made up 62.7 percent of these reserves in the fourth quarter of 2017, down from 64.59 percent in 2014 – but then the share of the next biggest reserve currency, the euro, has also dropped to 20.15 percent from 21.57 percent. This is hardly a tectonic shift.

And yet the U.S. does have a few things to worry about when it comes to its dominance of other countries’ official international reserves. In relative terms, governments and central banks are less and less interested in the ballooning U.S. debt.

U.S. debt, of course, is growing faster than global international reserves, and that partly explains the declining role of foreign countries in keeping the U.S. government solvent.

On the other hand, there’s plenty of U.S. debt to buy but countries aren’t keen to increase its share in their reserves. Instead, the share of U.S. Treasury securities has gone down to 25.4 percent currently from 28.1 percent in 2008, while the share of gold has held steady at about 11 percent over the same period, according to the World Gold Council. That’s in part thanks to the efforts of a few eccentric gold bug authoritarians. Apart from Russia, they include Belarus, Kazakhstan and, recently, Turkey, where President Recep Tayyip Erdogan believes the West is out to punish Turkey for his sovereignty-enhancing policies.

Russia, Kazakhstan, and Turkey account for 50 percent of net gold purchases by central banks in the last five years. But large European economies, which have long kept most of their international reserves in gold, have mostly held its share steady rather than invest more in dollar-denominated assets. The Euro area, including the European Central Bank, holds 55 percent of its total international reserves in gold, just like in 2008.

Most recently, total demand for gold has been down. It dropped 7 percent year-on-year in the first quarter of 2018 because of a drop in private investment demand (accordingly, the price of gold is down for the year). But central banks – primarily those of the gold bug authoritarian states – bought 116.5 tons of gold in the first three months of 2018, the most in any first quarter since 2014 and up 42 percent year-on-year.

For Turkey as for Russia, the decision to reduce holdings of Western currencies appears to be strategic. Like Russia, Turkey has recently moved quickly out of U.S. debt, cutting holdings by almost 38 percent to $38.2 billion since October 2017.