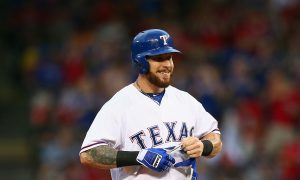 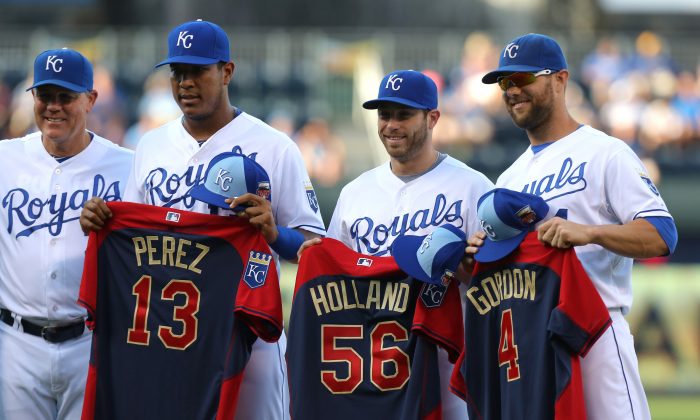 Royals manager Ned Yost (from L-R), catcher Salvador Perez, closer Greg Holland, and outfielder Alex Gordon all made the the All-Star team and are on pace to do the same this year—with plenty of company as the team is on pace to put start seven players. (Ed Zurga/Getty Images)
Baseball

The defending AL-Champion and first-place Kansas City Royals won’t have to wait long for the respect each up-and-coming team so desperately seeks. The once-struggling franchise, which came out of nowhere last year and swept their way to the World Series thanks to a strong defense, is currently on pace to put an astonishing seven (out of nine) position players in the All-Star game—thanks to this year’s online-only fan voting.

To put it in perspective, they’ve had just seven players total, in the last 31 years, get voted (by the fans) into the exclusive summer classic.

While defense may win games, hitting is traditionally what the fans want to see—and the Royals aren’t exactly lighting up the place on offense.

Pérez (.277 average, 8 home runs, 27 RBIs), who started last year’s game and has won two straight Gold Gloves, is probably worthy of getting the call again this year—although Oakland’s Stephen Vogt (.290, 11, 39) may have a case too.

Outfielder Lorenzo Cain is second in the league in defensive wins-above-replacement at 1.4 and was spectacular in last year’s postseason, but his offensive numbers (.282, 4, 23) lag well behind those of Adam Jones (.311, 9, 30). Ditto for the four-time Gold Glove winner Gordon, who’s hitting just .253 on the season.

Escobar is another great defender at shortstop, but a case for him to start (he’s hitting just .263) can only be made on the basis that no one at the position has excelled both in the field and at the plate.

While Kansas City fans have clearly shown up in droves on the Web (each email address is allowed 35 votes), it may not mean we have a Royal flush at the All-Star game.

Back in 1957, Cincinnati Reds fans voted in seven of the eight position players (no DH then). Only St. Louis first baseman Stan Musial had enough votes to keep it from being an all-Reds lineup. But then-commissioner Ford Frick stepped in, after finding out that local newspapers had printed out pre-filled ballots that fans had to just sign to mail in.

Frick overturned the selections of outfielders Gus Bell and Wally Post with future Hall-of-Famers Willie Mays and Hank Aaron, though Bell made it as a reserve.

The voting was then taken away from the fans until 1970. During the interim, the players, managers, and coaches were in charge of deciding the starting positions.

It may be a formula they go back to.