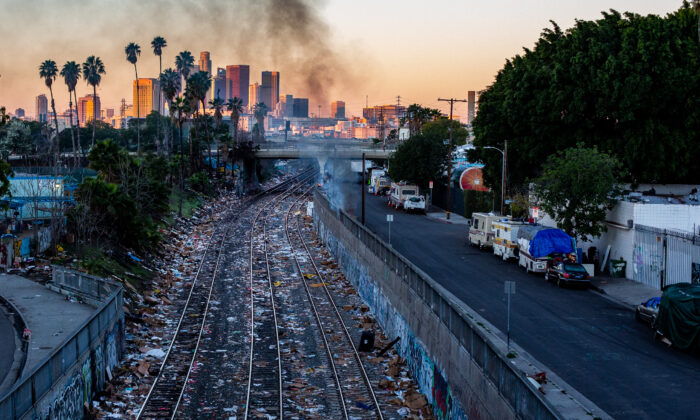 Smoke from a fire at a homeless encampment is seen near railroad tracks littered with boxes left behind from stolen items in Los Angeles on Jan. 2, 2022. (John Fredricks/The Epoch Times)
Viewpoints

Why Rich California Is a Poor State

California is a state of contradictions. Silicon Valley-San Francisco is the epicenter of global digital production and wealth. Yet the streets of San Francisco are cluttered with the homeless and their ordure and discarded needles. The middle class long has departed the Bay Area, or been reduced from that status to lower-class existence just by the vastly rising cost of living. As with the rest of the state, when the cost of living is taken into account, the poverty level is the highest in the nation.

The reasons and data are provided by the 15th edition of “Rich States, Poor States,” a report on all 50 of America’s states by the American Legislative Exchange Council (ALEC), a research think tank that helps state legislators. From its beginnings more than a decade ago, I’ve used this report as a useful barometer of what’s going on.

When some folks from Illinois came out here this past week, they told me they enjoyed seeing all the luxury cars on the road in Newport Beach and its vicinity: Bentleys, Rolls Royces, McLarens, Ferraris, Mercedes, and numerous Teslas. Not too many of those back home.

But it scored a horrible 49th for Cumulative Domestic Migration over the previous decade, losing 1.1 million people to other states. Only New York was worse, exiling 1.5 million residents.

We all know this personally. Some good friends of mine just decamped for Alabama. Others are considering Tennessee and Texas.

For the rank of 19th combining these three factors—two good and one really bad—California scored middling for a state that likes to pride itself as a national leader. Indeed, it’s portrayed as so powerful and influential Gov. Gavin Newsom and others brand California “a nation state.”

The Current Economic Outlook section is the most disturbing because it looks at the future in which we’ll be living. It’s an economic version of Disneyland’s “Tomorrowland.”

The ranking combines 15 variables, including:

As recently as the 2012 “Rich States, Poor States” report, California ranked 38th. Not great, but not near the bottom, as now. In 2012, Gov. Jerry Brown got voters to pass Proposition 30, which increased income and sales taxes $6 billion a year. It was a fatal mistake, confirming the state’s reputation as “Taxifornia.”

From 2013-2019, the state averaged a 47th place ranking on the ALEC survey for Current Economic Outlook, before dropping to 48th place in 2020. Only New Jersey and New York ranked worse. And they have many months of cold weather.

This being election season, we’ll be hearing a lot about how “California is back” and these are the best times ever. Maybe for those at the top. For the rest of us, not so much.