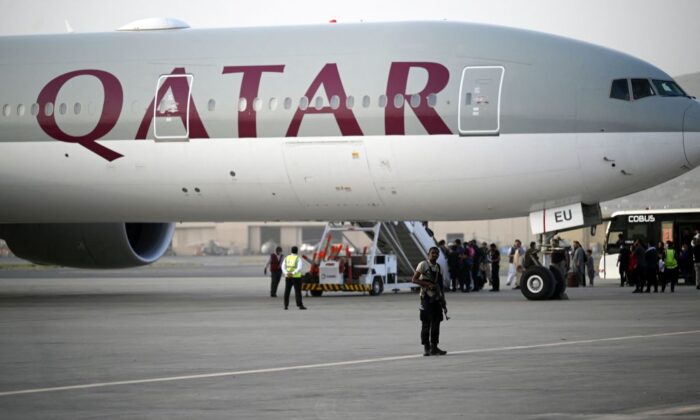 A Qatari security personnel stands guard as passengers board a Qatar Airways aircraft bound to Qatar at the airport in Kabul, Afghanistan, on Sept. 10, 2021. (Aamir Qureshi/AFP via Getty Images)
Viewpoints

The harrowing tale of 13 Australian women of child-bearing age who were subjected to an invasive gynaecological examination against their will aired on 60 Minutes on Nov. 14, 2021.

The saga proved that there are different and often incompatible versions of human rights.

The non-consensual procedure occurred at Doha’s Hamad International Airport on Oct. 2, 2020. The women were on their way to Sydney, where the health authorities would require them to quarantine for 14 days.

Well-armed police officers ordered the women to deplane, taking their passports with them. Instead, they were directed to ambulances, strip-searched and forcefully examined without their consent.

At the time, the young women did not know why the police had ordered them to deplane. It was undoubtedly a most frightening experience for the victims.

When asked by a reporter why the women had not even received an apology, Morrison, slightly dismissively, claimed recently during a press conference that Qatar had resolved the matter satisfactorily, by promising to initiate changes to their procedures and laying charges against the police officer who ordered the strip search.

The accused, although convicted, did not serve any jail time.

The tale of the Australian women is an example of an egregious violation of human rights, involving a forced medical examination without their consent and a spectacular disregard for the victims’ privacy.

Article 6(1) of the United Nations Educational, Scientific, and Cultural Organization (UNESCO) Universal Declaration on Bioethics and Human Rights, adopted in 2005, stipulates that “Any preventive, diagnostic, and therapeutic medical intervention is only to be carried out with the prior, free and informed consent of the person concerned, based on adequate information.”

It further states that the concerned person may withdraw the consent at any time and for any reason without prejudice.

Essentially, Article 6(1) of the Declaration directs that a person’s physical integrity be unconditionally respected.

While there is no doubt that the forced physical examination violates the rights of these women, the treatment of the event in the media is inadequate and unhelpful.

This is because an assessment of a human rights violation should consider the context in which it has occurred to enable objective commentators to make an impartial, balanced comment on the situation.

The context of the violation of the women’s physical integrity reveals that, although it is an egregious violation of a person’s rights to privacy and integrity in Australia, it is viewed differently in Qatar, where the event was seen as a measured but determined, response to the commission of a crime.

Qatar Airways exemplified this different understanding of human rights when it refused to enter consultations with the female victims on the ground that their claim had no merit.

A holistic understanding and assessment of the actions of the Doha police are only feasible if the human rights violation is placed in the context of a criminal investigation.

An infant, alive but abandoned, had been discovered in a toilet block; and it was likely that the unknown person was about to flee the country.

The abandonment of the newborn baby is a criminal offence in the middle eastern nation, which the judicial system of Qatar punished harshly.

This sordid sage also involves an infant’s right to life and the police’s obligation to investigate a serious crime: this is part of the contextual background to this case.

The investigating police officers decided on a solution—subjecting women travellers of child-bearing age to a compulsory medical examination—which is grossly disproportionate to the objective they wanted to achieve.

A claim, that a human right is violated should be considered in its context. Indeed, in this case, it is not sensible to separate the invasion of the women’s integrity with the abandonment of a newborn baby and the commission of a serious crime.

Looking at it from an Australian point of view, the forced medical examination is a humiliating and ill-conceived, even despicable, occurrence.

But, if the only focus is on the right of the victimised women, it will not be possible to arrive at an unbiased, holistic understanding of the context in which the violation happened.

If so, it will be difficult, nigh impossible, to resolve the conflict acceptable to all parties.

A myopic focus on the interests and rights of only one party is thus unlikely to lead to a satisfactory result.

However, if the context of the medical examination were taken into account and not treated as an isolated occurrence. In that case, it might be possible to gain an unbiased and impartial understanding of the event capable of resolving the dispute and alleviating the legitimate concerns of the victimised women.

Indeed, an exclusive focus on the rights of the women would inexorably lead to the perception that a horrible injustice has occurred.

While this may well be true, a balanced view of the matter should consider the interest of the Qatari police to solve a crime involving the abandonment of a new-born baby dumped in a bin in the airport’s toilet block, and the indication that the person who committed the crime was seeking to fly out of Doha hastily.

These considerations are in addition to the realisation that in Qatar, human rights are seen in a radically different light than in Australia.

Nevertheless, it is deplorable that Qatar Airways, a highly awarded airline with superior service, did not even want to meet the women or consult with them.

In doing so, it closed the door to an acceptable approach to rapprochement, which would see this case satisfactorily resolved.

This saga proves that a single-minded focus on Australia’s understanding of rights, including privacy, obfuscates any chances for reaching an acceptable solution.