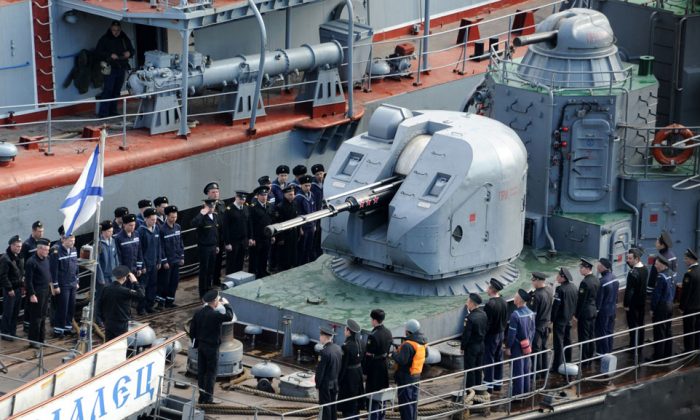 Russian navy sailors stand still during a flag-raising ceremony at the deck of their ship, the 'Suzdalets' ASW corvette, moored in the bay of the Crimean port of Sevastopol on March 27, 2014. Ukraine's maritime forces have been severely diminished by the Russian intervention in Crimea after they lost 12 of their 17 warships to Moscow, including the 'Ternopil' ASW corvette, defence analysts Jane's said yesterday. (Viktor Drachev/AFP/Getty Images)
Opinion

Why Putin Doesn’t Care About Sanctions

NEW HAVEN: At the end of a tumultuous week that began with the referendum in Crimea, two signing ceremonies took place on Friday: In Brussels, Arsenii Yatseniuk, the prime minister of Ukraine, and EU leaders signed the political cooperation provisions of an Association Agreement – the agreement former President Viktor Yanukovych decided not to sign in November. In Moscow, after the Duma and Federation Council ratified the treaty on the accession of Crimea and Sevastopol to the Russian Federation, President Vladimir Putin signed into law the legislation annexing those territories.

Russia’s takeover and annexation of Crimea occurred despite several long meetings between US Secretary of State John Kerry and Russian Foreign Minister Sergei Lavrov; numerous telephone calls from EU and American leaders seeking to persuade Putin not to proceed with the takeover and annexation; and, after the referendum and annexation, two rounds of sanctions levied by the US and EU on several dozen Russian officials. None of those conversations and measures had any effect. Putin was, as German Chancellor Angela Merkel told President Barack Obama, “in another world.”

As commentators spoke of a new Cold War and the world held its collective breath and awaited Russia’s next move after deploying additional troops to its border with Ukraine, many wondered why Putin was willing to violate international law so blatantly and, in so doing, incur the wrath of the international community and economic sanctions, drive Ukraine into the arms of the EU and give NATO a new raison d’être – all for a small piece of Ukraine.

The answer, of course, is that he and his advisers came to believe it was in Russia’s national interest to take control of Crimea and incorporate it into Russia. Crimea in the hands of a hostile Ukraine would threaten Russia’s hold on its base for the Black Sea Fleet at Sevastopol – the navy’s only warm-water port and one that is strategically located close to the Mediterranean and the Middle East.

Compared with the other regions in Ukraine, Crimea is unusual in several respects. It was part of the Russian Republic of the USSR until 1954, when Nikita Khrushchev, who had headed the Communist party in Ukraine at one time, gave it to Ukraine. The peninsula is by far the most ethnically Russian region in Ukraine. As of 2001, 58 percent of its population was ethnically Russian; no other region is more than 39 percent Russian. It has the largest proportion of the population – 77 percent – identifying Russian as their native language; the proportion exceeds 50 percent in only two other regions.

Russia’s Black Sea Fleet has been based since the late 1700s at Sevastopol. In 1997, Ukraine granted Russia a 20-year lease for the Sevastopol base, and in April 2010 Yanukovych and former Russian President Dmitry Medvedev agreed in their Kharkiv Pact to extend the lease to 2042. The lease allows for extensive support forces for the base, including aircraft, armored vehicles, marines and infantry forces.

Despite the ease with which Russia could take control of Crimea, there’s good reason to think Putin and his advisers did not decide to do that until it became apparent a February 21 agreement between Yanukovych and the three opposition leaders, mediated by the foreign ministers of Poland, France and Germany and a personal representative of Putin, would not be implemented.

The agreement, negotiated after three days of violence that left nearly 100 dead, stipulated that within 48 hours a special law would be adopted restoring the 2004 constitution, which gave substantially more power to the parliament than the existing constitution. The parties agreed to create a coalition and form a national unity government within 10 days, undertake constitutional reform that would be completed by September, and hold presidential elections no later than in December.

While comprehensive, the agreement was flawed in one important way: It allowed Yanukovych to remain in office for another 10 months. After the killing of almost 100 protesters, that was unacceptable to the protesters and many others. When Vitali Klitschko, one of the opposition party leaders, presented the agreement to protesters in Independence Square, he was booed and jeered. The agreement was dead on arrival.

That day the parliament restored the 2004 constitution, demobilized riot police and ordered their withdrawal from the government district, including the presidential offices. The next day, noting that Yanukovych had fled in the night to Kharkiv, parliament removed him from office for neglecting his constitutional duties and scheduled new elections for May 25. It elected Oleksandr Turchynov, the deputy leader of Fatherland, the largest of the three opposition parties, as speaker and, with the presidency vacant, elected him acting president the next day.

On February 27, the parliament voted into office a new government that included members of Fatherland and Svoboda, a far-right opposition party; Maidan activists; and several unaffiliated persons. Later that day, troops in unmarked uniforms – Russian marines and Special Forces based in Crimea – began taking control of government offices, airfields and other strategic sites.

Russian officials were quick to label what happened in Kiev a coup d’état. Prime Minister Medvedev described it as an “armed mutiny” and “rule of radicals, militants and bandits.” In a March 4 press conference, Putin said, “There can only be one assessment: this was an anti-constitutional takeover, an armed seizure of power… What was the purpose of all those illegal unconstitutional actions? … Are the current authorities legitimate? The Parliament is partially, but all the others are not. The current Acting President is definitely not legitimate.”

The takeover and annexation was not just payback for what Russia saw as an unconstitutional seizure of power by hostile forces – one that, given his involvement behind the scenes in the February 21 agreement, was a direct and personal affront to Putin.

It also reflected a belief that a Ukraine governed by the forces that now control Kiev and are likely to do so after May 25 could threaten Russia’s national security – by ripping up the Kharkiv Pact and canceling the Sevastopol base lease; by not only completing the association agreement with the EU but moving toward membership – something the EU’s Foreign Affairs Council implicitly offered on March 3 by stating the agreement “does not constitute the final goal in EU-Ukraine cooperation” – and by rescinding legislation adopted in June 2010 that prohibits membership in any military alliance, which would allow Ukraine to join NATO and station NATO troops on its eastern border.

From Putin’s vantage point, after February 21 all three outcomes seemed possible. Indeed, the first – ripping up the Kharkiv Pact – was proposed by Ukraine’s three former presidents in early March. The takeover and annexation of Crimea has removed that threat. But the other two remain. For a president who envisions Ukraine joining Russia and other post-Soviet states in a Customs Union and Eurasian Economic Union, movement toward and membership in the EU is unacceptable. And for a president who once declared “the collapse of the Soviet Union was the greatest geo-political catastrophe of the century,” close cooperation with and membership in NATO is not only unacceptable but, if pursued by Ukraine, would undoubtedly prompt a military response far exceeding the scope and impact of the Crimean takeover.

The US and European leaders have issued strongly-worded condemnations and sanctions that, at least in the American case, have some bite. But for Putin, they are a sideshow; what is at stake in Ukraine and remains so, even after the annexation of Crimea, is nothing less than Russia’s national interest.

David R. Cameron is a professor of political science and director of the Yale program in European Union studies. Copyright © 2014 The Whitney and Betty MacMillan Center for International and Area Studies at Yale.