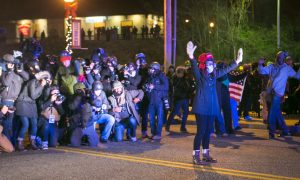 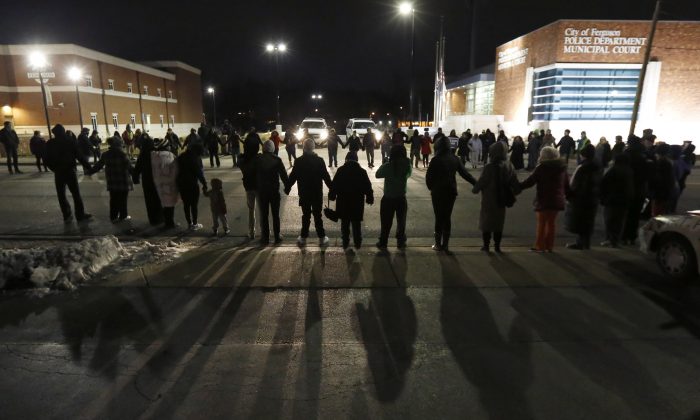 Protestors block traffic outside the Ferguson Police Department, Wednesday, March 4, 2015, in Ferguson, Mo., after the Department of Justice released a report documenting abuses within the police department. (AP Photo/Charles Rex Arbogast)
US

Just two weeks before Michael Brown was shot and killed by a police officer in Ferguson, Mo.—prompting a federal investigation into the practices of the small suburb’s police force—the Department of Justice (DOJ) had released a report about the persistent abuses of the Newark Police Department in New Jersey.

Investigators discovered that 75 percent of the reported stops that Newark police conducted on pedestrians had no legal basis. Thousands of people were stopped for “milling,” “loitering,” or “wandering,” without any reasonable suspicion that they were engaged in criminal activity.

When people questioned why they were being stopped, or openly criticized officers for their actions, Newark police often arrested them on charges of obstruction of justice, resisting arrest, or other similar offenses.

About 80 percent of the police stops and arrests were against blacks, though they make up just 54 percent of the city’s population. Blacks were 2.5 times more likely to be stopped or arrested than whites, even in areas of the city where there were far fewer black residents.

These findings sound remarkably similar to the results of the DOJ’s investigation into Ferguson’s police, which were documented in a biting 102-page report released Wednesday.

Like in Newark, Ferguson’s police routinely stopped, arrested, and searched the city’s black residents without regard for their constitutional rights.

Black residents make up 67 percent of Ferguson’s population, but were 93 percent of the people arrested. Black drivers were more than twice as likely to be searched during a traffic stop, even though the searches were 26 percent less likely to produce contraband than when white drivers were searched.

In police departments across the country, the DOJ under Attorney General Eric Holder has found patterns of police misconduct, ranging from excessive use-of-force to racial profiling. The department has opened more than 20 investigations into law enforcement agencies.

Stops, searches, and arrests conducted under questionable legal standards is a common problem found among police departments. A 2011 federal investigation of the New Orleans Police Department, for example, found that the agency lacked training and policy guidelines on how officers should properly conduct them, even though a previous investigation 10 years ago warned about the same problem. In 2014, New York City cut down its “stop-and-frisk” policing strategy after a federal court ruled that the policy unfairly targeted minority residents.

Ferguson: A New Level of Abuse

But the disregard for the rule of law in Ferguson is of a different proportion, said Candace McCoy, professor at the City University of New York Graduate Center and John Jay College of Criminal Justice.

“In other cities, everywhere—it [illegal stop, search, and arrest] happens. But the degree to which it happens in Ferguson, and its racist application is worse than in most other places,” said McCoy.

The most common violation officers charged people with was called “manner of walking in roadway,” which officers used with great discretion to ticket someone. African-Americans made up 95 percent of the people cited for this charge.

McCoy said the city’s focus on making money off these fines (primarily from black residents) was something the DOJ hadn’t explored in previous police department investigations. While many jurisdictions rely on fines and fees for revenue—whistleblower officers in New York City and Los Angeles, for example, have spoken about having to meet ticket quotas—Ferguson’s municipal court often slapped additional fees on people who could not make their payments in time or failed to appear for a court hearing.

The DOJ report details several such cases, including a 67-year-old woman who was stopped by an officer. She was arrested after the officer ran a warrant check and discovered an outstanding warrant for not paying a trash removal ticket. The court ended up charging her $1,000 in fines.

McCoy said the impunity with which the Ferguson court issued warrants was unprecedented and alarming. In 2013, the city issued 9,000 warrants for minor violations.

In addition, officers frequently failed to meet legal standards to stop the person in the first place. To stop someone, an officer must prove that there is “reasonable suspicion” that a crime is about to take place and someone’s life may be in danger.

Judges in Ferguson are elected by the City Council, which McCoy said becomes an easy way into corruption, since the judges’ jobs are dependent on the council. The DOJ report details a city report where the council praises Judge Ronald Brockmeyer for being “successful in significantly increasing court collections over the years.”

McCoy said the court should change its policies so that they stop “relentlessly churning poor people through the system” when they cannot afford to pay their fines.