Who Is the Lebron James of the NFL? 19 NBA/NFL Counterparts
0
Share Now
FacebookTweetParlerEmail
Copy Link 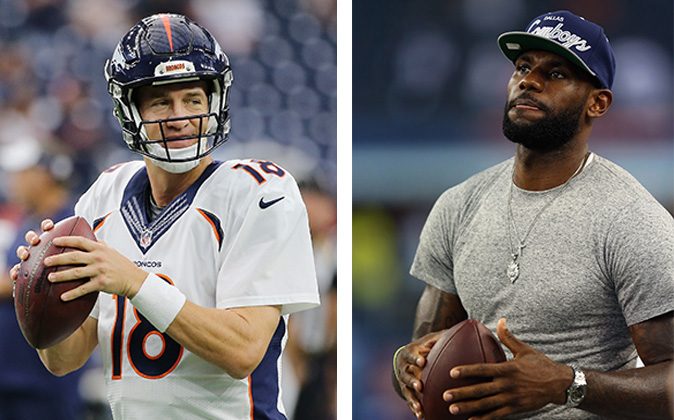 Two-time All-Pro running back Jamaal Charles is one of the best backs in the NFL today. He’s averaged an impressive 5.5 yards per carry for his career and led the NFL is rushing/receiving TDs with 19 in 2013.

But he’s not the LeBron James of the NFL, as he says he feels like sometimes.

Three-time All-Pro Adrian Peterson is still the most feared back in the game and is one of the best backs in NFL history. He’s topped the league in rushing yards twice, including in 2012 when he ran for 2,097 yards—the second-highest total of all time—on his way to winning MVP.

But he’s not the LeBron James of the NFL either, as he claimed in response to Charles’s comment.

While both Charles and Peterson have compared themselves to the NBA’s top player, with a combined one MVP and no Super Bowl appearances, neither has the goods to be the NFL’s equivalent.

So, who could? Let’s review LeBron’s résumé.

In case anyone has missed the NBA over the last decade, LeBron is not only the most celebrated player in the game today, with four MVP awards and a pair of titles, he’s arguably the best player of all time. And at 31, he’s still in his prime and should add to his hardware in the years to come.

Related Coverage
Who Is the Lebron James of the NFL? 19 NBA/NFL Counterparts

The answer is none other than Peyton Manning—with Tom Brady a close second.

Granted, both players—each in their late 30s now—are expected to be exiting their primes very soon if not opting for retirement.

Manning, who won his record-extending fifth MVP in 2013, holds the single-season record for both TD passes and passing yards and has been an All-Pro seven times. His only gaffe has been some unfortunate postseason performances that have left him with just one Super Bowl win in three tries.

Still, it’s one more than Peterson and Charles have and puts him on par with the NBA’s best.